Editor’s Note: This briefing note was prepared for a retreat convened by the Independent Research Forum on a Post-2015 Sustainable Development Agenda (IRF2015).

Official development assistance (ODA) has played an essential role in development financing, especially for those countries with less access to private capital flows. ODA was relatively stagnant in real terms from 1990 to 2002, rising from $86 billion to $89 billion (constant 2012 dollars). Since then it has risen steadily, reaching a new peak of $134.7 billion in 2013. Even with this growth, however, ODA remains far short of the target of 0.7 percent of gross national income of DAC countries, and prospects for achievement of that target are bleak.

ODA contains a mix of different financing. Only a portion actually flows to countries. Much of the rest is made available within donor countries in the form of administrative expenses, refugee costs, scholarships and the like. The Development Assistance Committee (DAC) has developed an alternative concept of Country Programmable Aid (CPA), to focus on flows actually reaching developing countries. This has also increased from $41 billion in 2000 to $57 billion in 2012.

Understanding the gap between ODA and CPA is important because ODA forms the basis for commitments made by DAC countries, while CPA is more relevant for financing that can be used for development goals or for meeting balance of payments gaps.

The characteristics of ODA that make it the best source of external capital for development are:

To increase the development impact of ODA, each of these attributes should be increased.

Concessionality is mostly computed from the perspective of donors. The DAC calculates ODA as flows with a grant element of at least 25 percent, usually calculated using the commercial interest reference rate of each currency in which the loan is denominated. In the current context of very low commercial interest rates, a strict application of the DAC methodology would have made many loans from public development agencies non-concessional.

In a new definition used by the International Monetary Fund (IMF), concessional lending is defined as all loans with a grant element of at least 35 percent, calculated using a unified discount rate of 5 percent. The IMF approach resolves the problem of loans with identical terms being classified as ODA at one point in time and non-ODA at another point in time, simply as a result of domestic monetary policy rates. However, under the IMF approach, donors may be able to make loans at a rate above their own cost of funds, and still call this “concessional aid”.

The various metrics of concessionality are useful for donors to compare with each other the budgetary effort and consequences of their aid commitments. However, the metrics do not take into account the perspective of the recipient.

From the point of view of a developing country recipient, the value of aid should be computed with regard to their opportunity cost of external capital. For example, a grant is worth more to a country that otherwise would have to pay, say, 7 percent interest on a loan from private capital markets than its value to a country that only has to pay 5 percent. The same is true for a low-interest loan.

This suggests that the development impact of aid depends not just on the amount of aid, but also on its allocation across countries. Traditionally, that allocation has roughly followed per capita GDP. Donors give more money, per person, to countries with low incomes than to countries that are richer.

How should the reallocation of aid be done to maximize development impact? It should focus on those countries where the opportunity cost of capital is high and where the domestic policy environment is conducive to effective use of aid.

The major reallocation of aid that has permitted an increase in aid to low income countries has been the graduation of China. In the 1990s, China received just under $2 billion per year in aid. By 2010/11, it was repaying $1.3 billion a year of its concessional debt to bilateral and multilateral donors. Meanwhile, India, in 2010/11 received one-tenth as much grants as other low middle-income countries (expressed as a share of its GDP), but continued to receive considerable amounts of concessional loans (mostly from multilaterals). In the medium-term future, India, too, will graduate from concessional assistance and these funds can be reallocated to other countries.

Reallocations from large economies such as India and China which have good access to capital markets are likely to be as important a source of additional aid for low income and least developed countries as the overall expansion of ODA.

How should the reallocation of aid be done to maximize development impact?   It should focus on those countries where the opportunity cost of capital is high and where the domestic policy environment is conducive to effective use of aid.

There are good metrics for the opportunity cost of capital. Many developing countries already have a bond rating: 12 low income countries and 61 middle income countries. Only 41 countries do not have ratings but these can be proxied using variables such as GDP per capita, the level of indebtedness, and the degree of vulnerability to shocks. Least developed countries are one category of country that typically have low levels of GDP per capita, high debt, and significant vulnerability to shocks. But there are other examples, too. For example, many small-island developing countries have both high indebtedness and are vulnerable to external shocks. They face high costs of borrowing from abroad. The same applies to fragile and conflict and post-conflict states. If their policy environment is strong, they should be good candidates for receiving grants regardless of their GDP per capita.

On the other hand, several countries that are large aid recipients do not meet any of the criteria for most efficient use of scarce aid resources. One case in point is Turkey, the single largest recipient of EU aid. While Turkey has many development problems, it has alternatives available to it at reasonable cost. The EU may choose to support Turkey for a range of political reasons, but it would be hard pressed to argue that aid to Turkey is a priority from a purely developmental point of view, or from the viewpoint of needs to meet the Millennium Development Goals (MDGs) or any successor goals.

Stability and Predictability. One feature of ODA is that it may be stable at the level of a donor, but it is quite volatile and unpredictable from the perspective of an individual country. Without predictability, aid funds cannot be programmed into budgets. Without stability they cannot be used for long-term programs, like support for strengthening health and education systems. By some estimates, the degree of volatility of actual net disbursements reduces the development impact of aid by 20 percent.[2]

Some volatility may be good. For example, it would have been useful for aid to play a stronger countercyclical role during the Great Recession, but for most low income countries, grants and concessional loans did not increase significantly in 2009 when global financial pressures were greatest. Donors have some ability to reallocate funds from one country to another if a natural disaster strikes, but far less ability to commit and disburse additional assistance to a large group of developing countries who may be subject to the same shock.

Perhaps because of a lack of predictability that hampers the spending of aid flows, grants and concessional lending co-exist with increases in the foreign exchange reserves of developing countries. That is to say, the inflows of external funds are offset by a corresponding outflow. In this sense, not all ODA is actually used for spending on programs designed to meet development goals.

The DAC surveys donors forward spending plans. By the third year after the 2013 survey, donors only have programmed about one-sixth of the amounts they programmed for the first year of the survey.

Availability for core public expenditures. Developing countries as a whole received about $90 billion in gross country programmable aid in 2012. They also repaid about $14 billion back to bilateral donors and multilaterals on loans they had previously received. The amounts actually available for core public expenditures are therefore only around $76 billion per year, far lower than the ODA figure that is the subject of most global negotiation.

There is an enormous divergence between spending levels by governments on goods and services consumed by individuals (as opposed to collective goods like public administration, defense, justice, police and the like). According to the new World Bank report on global economies,[3] African governments spend only $541 per person. Some African countries, like Tunisia, South Africa, Seychelles, Namibia, Mauritius, Egypt, Botswana, Angola and Algeria each spend over $1000 per person, while low income African governments may be spending less than $100 per person: Liberia ($6), Comoros ($8), DRC ($31), Guinea ($32), CAR ($54). In contrast, most Latin American countries spend far more per person, except for Haiti ($22) and Bolivia ($100) that also have very small spending levels. Caribbean countries average $2600 of government spending on individual consumption items per person.

These new data on government spending per person are useful for identifying where the largest gaps are in the availability of finance for many of the development goals. Without public spending to provide access to basic services, it is unlikely that the aspirations for leaving no one behind can be met.

Some countries are heavily dependent on aid. Table 1 shows the 25 countries with the highest share of net ODA disbursements in GDP. 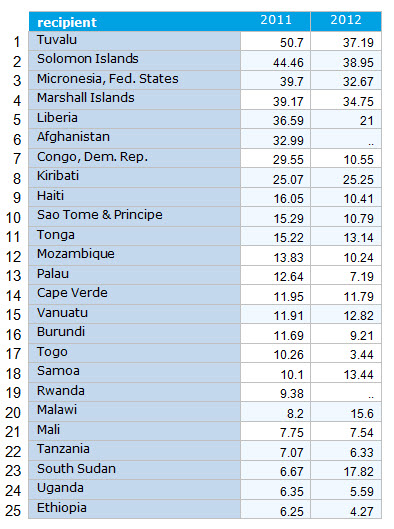 These countries will not be able to sustain their development without improving their own tax revenue base and reducing their dependence on aid. Aid-for-tax-administration is a proven indirect channel for leveraging external resources because large increases in domestic resources can be realized for every dollar of aid. And with more domestic resources, countries will be able to afford higher levels of core public expenditures. Yet very little aid (the DAC estimates less than 1 percent) is provided for this purpose.

Similarly, aid can be used to catalyze private financing for development. The most promising areas are in infrastructure, where aid can help fund the initial costs of project preparation, or legal costs of ensuring governments have adequate representation in negotiating contracts with large multinationals. But there are other areas where aid can play a catalytic role: examples are, organizing farmer cooperatives to facilitate the development of agricultural value chains with large agribusinesses; ensuring sustainability of social services in localities where mining companies might provide initial funding, but only for the period of operation of the mine; helping train entrepreneurs to increase the supply of bankable SME projects.

Linkage with knowledge and experience. Many developing countries prefer to receive aid in the form of budget support. This permits them to apply their own priorities, reduces fragmentation of programs and duplication of efforts by donors, improves accountability to recipient institutions, including Parliaments and civil society. However, when aid is “projectized”, it is also associated with considerable implicit technical assistance. There are other mechanisms for providing such technical assistance and knowledge sharing, but these have not yet evolved in a practical way. There is, therefore, a trade-off between providing aid for projects and specific purposes, and providing it through more general support channels.

When aid is small compared to government spending out of its own revenues, it makes little sense for aid projects to be implemented using parallel processes. That adds to duplication and waste and does not build better efficiency across the far larger amounts of public spending.

[1] These numbers refer to grants as measured by the balance of payments, a slightly different concept from ODA.