Access to jobs is vital to economic opportunity. A fair and well-functioning labor market provides that access, allowing the widest possible scope for individuals to exercise their talents and support their families. Our labor market institutions, which include occupational licensing, unemployment insurance, and unions, among many others, structure workers’ experiences in ways that demand careful analysis. Are these institutions helping workers to make the most of their economic opportunities?

This economic analysis focuses on the role of occupational licensing—that is, the legal permission that many workers must obtain before working in professions ranging from law and medicine to, in some states, floral arrangement and landscaping. According to the Bureau of Labor Statistics (BLS), nearly a quarter of all employed U.S. workers reported having a license in 2015. As the prevalence of licensing has grown from around 5 percent (in the 1950s) to about a quarter of employees today, licensing has become a central labor market institution that shapes employment opportunities for many workers. A growing body of research suggests that licensing has pervasive impacts on workers’ wages and employment as well as prices faced by consumers.

In June 2016, the Council of Economic Advisers produced a valuable report using the new survey data on occupational licenses and certificates. This report accompanied a summary of the Obama Administration’s progress in encouraging occupational licensing reform. The efforts detailed there suggest that substantial progress has been made in supporting state-level legislation that makes it harder to deny licenses to people with irrelevant criminal records, funding at the Department of Labor for the encouragement of license portability, and comprehensively assessing state-level licensure rules. Many of these reform efforts were inspired by the work of Morris Kleiner, whose Hamilton Project proposal discussed the need for licensing reform.

Box 1. What are licenses and certificates?

A license is a credential that a local, state, or federal government requires a worker to hold to practice in a given occupation. Typically, licenses are required by state governments. Some occupations are universally licensed – think doctors and lawyers – but many occupations are licensed only in certain states. This lack of uniformity makes it especially important to collect worker-level data on licensing, as otherwise we have a difficult time estimating the proportion of the workforce that is licensed.

The U.S. licensure system takes a variety of forms throughout the country, but typically a state regulatory board (e.g., the Ohio Board of Nursing) will process license applications, handle renewals, and oversee compliance with licensing rules, among other activities. State legislatures authorize the boards, writing legislation that sets requirements for obtaining a license, defines the scope of the board’s authority, and so forth. Importantly, licenses granted by a particular state are generally not recognized by other states.

What is licensing for?

Typically, customers face few adverse effects from low-quality work, or they can readily evaluate the work’s quality themselves. For instance, customers can choose a tailor and decide whether the pant hemming done is satisfactory, all without benefit of a license. Potential problems arise, however, when work quality is difficult to observe and harm from low-quality work is substantial. In economic terms, a problem of “asymmetric information” may result, with consumers unable to distinguish between high- and low-quality work. For example, an incompetent surgeon may be hard to identify – at least ahead of time – and patients may suffer serious harms before having the opportunity to learn from repeated interactions.

There are a number of possible solutions to the problem of asymmetric information. Some are purely private: third party organizations with relevant expertise can attest to the competence of a worker, often through a private certificate or reputational markets like Yelp can help consumers share their experiences with particular workers. Other solutions are public and involve some form of regulation: the government may issue its own certificate, require that workers be bonded or insured, or directly inspect workplaces, among other possibilities. Increasingly, governments issue licenses that workers are legally required to obtain prior to working in their occupations.

Because licenses often require substantial time and money to acquire, they are considered an especially stringent form of occupational regulation. In some cases – physicians, for instance – a certain amount of licensing is reasonable and necessary to protect public health and safety. In other cases, the necessity of licensing is more questionable, and collecting additional data about its labor market and other consequences is especially useful.

For a given economic activity, there is a normal rate of return that market participants receive. This is the return necessary to keep the “factor of production” (typically, either labor or capital) engaged in the marketplace. For instance, the United States Treasury must pay a given rate of interest in order to obtain additional funds.

Returns earned beyond this normal level are called “rents.” Monopolists and beneficiaries of some government regulations commonly receive these rents. When it is difficult for other market participants to compete with a firm or worker, rents become more likely.

An occupational license protects some workers from competition by raising a barrier to entry into the profession. In doing so, it may create rents for the protected workers. In principle, rents can take a variety of forms: higher wages, better working conditions, and lower unemployment.

However, it is important to remember that these rents come at a cost. Economists believe that rents for licensed workers come at the expense of both consumers—who pay higher prices—and unlicensed workers. In some cases, the rents are even taken from other licensed workers, as with physicians who benefit from restrictions on the scope of practice allowed to nurse practitioners. Here, rents are generated by overly restrictive state limitations on the activities that workers in other occupations (e.g., nurse practitioners) may conduct, reducing competition for the favored profession (physicians, in this instance).

Using the newly released Bureau of Labor Statistics data, it is possible to describe licensed workers and then examine a number of important economic implications of licensing.

Licensing varies substantially by occupation. Legal, education, and healthcare occupations feature licensing at particularly high rates, as shown in Figure 1. Note that the increase in licensing since mid-century is not primarily due to the increase in employment in healthcare and other highly licensed service sectors.

Licensing also varies by state. Though some occupations are universally licensed, most are licensed only in certain states, with some states choosing to forego licensing restrictions. The burden of the restrictions, measured in terms of time and money, is also quite variable. For instance, the number of days required to obtain a cosmetology license varies from 233 in New York to 490 in Iowa. 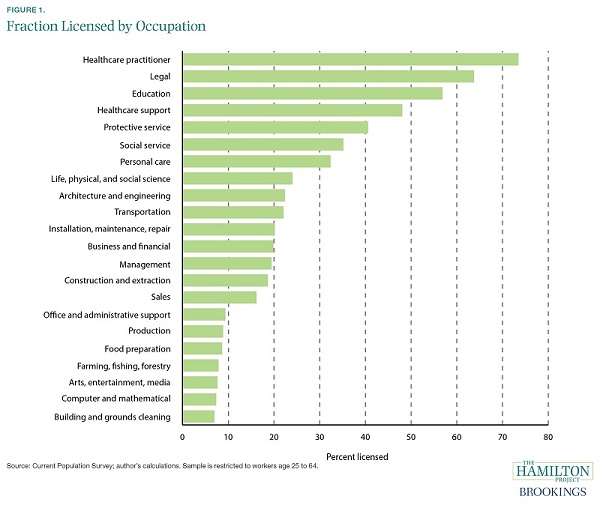 What are the labor market consequences of licensing?

Given the occupation-specific nature of licensing, estimates of wage premiums are more useful when they are calculated separately by occupation group, as in Figure 2. It may be that the “rents” (see Box 2) generated by a license in one occupation are larger than the rents generated in another, perhaps because the licensing requirements are more onerous. Empirically, wage premiums are highest for workers in transportation, healthcare, construction, production, and education. These positive wage premiums can be interpreted as evidence that licensed workers are receiving an advantage from reduced competition, with unlicensed workers earning correspondingly lower wages. 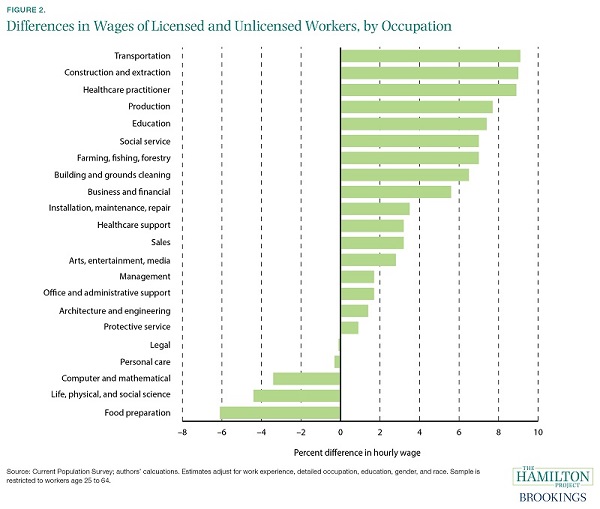 Research has focused on the wage benefits accruing to licensed workers, some of which are rents created by the licensure barrier to entry. But elevated wages are not the only form that benefits to licensed workers may assume; increased chances of finding employment – the unemployment premium – also constitute an advantage. In most occupations, licensing appears to confer a substantial advantage in terms of being able to quickly find and retain employment.

When workers choose among various professions, they must weigh all the costs and benefits. How will workers decide between entering licensed and unlicensed occupations? Balanced against the costs of acquiring a license – both in time and money – are two principal benefits: increased wages and greater ease of finding a job (i.e., lower unemployment). To the extent that research has ignored the unemployment premium, estimates of rents accruing to licensed workers have been underestimated, and licensing appears less costly to the public than it actually is.

The unemployment premium is calculated in much the same way as the wage premium. For each occupation group, the difference between licensed and unlicensed unemployment rates is estimated after controlling for the same observable characteristics of workers used previously: educational attainment, work experience, gender, race, and detailed occupation. Because underreporting of license-holding may be a concern for those who have been non-employed for an extended period of time, the sample is restricted to those who have worked in the last 12 months.

Consistent with the wage premiums estimated previously, unemployment differences are large for workers in healthcare, construction, and education, indicating sizeable rents associated with licensing in these professions. As shown in Figure 3, unemployment rates are almost two percentage points lower for healthcare support workers who are licensed; conversely, unlicensed healthcare support workers are almost two percentage points more likely to be unemployed than their licensed counterparts. In contrast, sales workers with and without licenses have roughly similar unemployment rates. In a few occupations, licensed workers appear to experience higher unemployment rates than their unlicensed counterparts. In general, these occupations are the same as those that featured negative wage premiums. 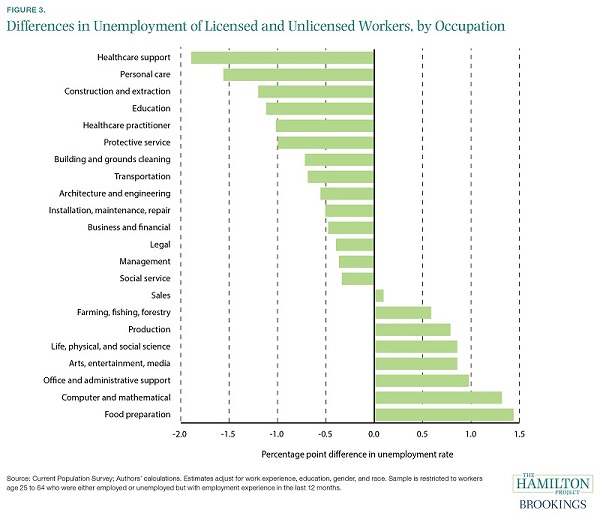 The free movement of workers across the United States is essential for wage, productivity, and employment growth. Well-functioning labor markets have many advantages: in the aftermath of a recession, worker movements across regions speed economic recovery. Even during normal times, worker migration facilitates better matches between workers and firms.

Unfortunately, our state-based occupational licensure system frequently acts as an impediment to worker mobility. When a worker has made large investments of time and money in obtaining a license from a particular state, she will be understandably reluctant to move to another state and again pay the costs of becoming licensed, even when job conditions are better elsewhere. For instance, a high-school teacher licensed in a particular state will generally have to re-apply for licensure before working in any other state; this may involve additional testing and other requirements. Using the newly available licensing data, one can analyze the extent to which licensing actually restricts worker mobility.

After adjusting for observable individual characteristics, licensed workers appear somewhat more likely than their unlicensed counterparts to move within a state. However, they are much less likely to move outside their state.

Licensed workers are also less likely to move than certified workers. A key distinction between licensing and certification is that while a license often has limited value outside the state of issuance, a certificate will have value across the nation. Indeed, having either a license or a certificate both indicate that an intra-state move is somewhat more likely, after adjusting for worker characteristics. By contrast, a certificate is associated with a slightly higher probability of an interstate move, while a license is associated with a much lower chance. Figure 4 shows these comparisons. 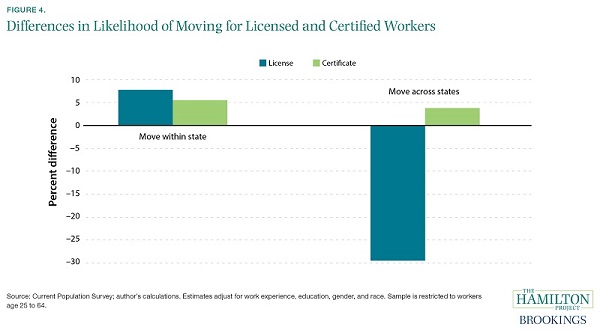 Licensing plays an important role in determining workers’ wages, employment, and mobility as well as the overall health of the labor market. Lower wages and higher unemployment rates for unlicensed workers, as well as reduced migration rates for those with licenses, all suggest that the social costs of licensing are larger than many have previously believed. Research on these impacts will be greatly encouraged by the new data described in this paper.

The Hamilton Project aims to contribute to the development of sound policy based on high-quality evidence, as well as to promote broad-based economic growth. Improving occupational licensure policy achieves both of these goals. As state policy makers consider various reforms, it is important that they have an accurate understanding of the full range of consequences of licensing, and only have recourse to licensing when benefits outweigh the substantial costs.