Last week legislation was introduced in the Senate and House to create federally funded universal pre-k for 4-year-olds.  The details of the legislation are largely consistent with the White House proposal, called Preschool for All, that was announced in the president’s state of the union address in February.

The rhetoric around the introduction of the legislation includes the by now entirely predictable and thoroughly misleading appeal to the overwhelming research evidence supporting such an investment.  For example, Senator Harkin, the lead author of the Senate version of the legislation, declared that “Decades of research tell us that … early learning is the best investment we can make to prepare our children for a lifetime of success.”

By way of background, I’m a developmental psychologist by training and spent the majority of my career designing and evaluating programs intended to enhance the cognitive development of young children.  For instance, I directed a national Head Start Quality Research Center; created a program, Dialogic Reading (which is a widely used and effective intervention for enhancing the language development and book knowledge of young children from low-income families); and authored an assessment tool, the Get Ready to Read Screen, that has become a staple of early intervention program evaluation.  My point is that I care about early childhood education and believe it is important – as witnessed by how I spent my professional life for 30 years.

My career since 2001 has largely been about advancing evidence-based education, which is the endeavor of collecting and using the best possible evidence to support policy and practice in education.  Since the president’s state of the union address, I’ve been writing that the evidence is decidedly mixed on the impact of the type of preschool investments the president has called for and that we now see in the legislation introduced in Congress.  It may seem in the pieces I’ve written that I’m wearing only my evidence-based education hat.   But in fact if you’re an advocate of strengthening early childhood programs, as I am, you also need to pay careful attention to the evidence – all of it.  Poor children deserve effective programs, not just programs that are well-intentioned.

Unfortunately, supporters of Preschool for All, including some academics who are way out in front of what the evidence says and know it, have turned a blind eye to the mixed and conflicting nature of research findings on the impact of pre-k for four-year-olds.  Instead, they highlight positive long term outcomes of two boutique programs from 40-50 years ago that served a couple of hundred children.  And they appeal to recent research with serious methodological flaws that purports to demonstrate that district preschool programs in places such as Tulsa and the Abbott districts in New Jersey are effective.  Ignored, or explained away, are the results from the National Head Start Impact Study (a large randomized trial), which found no differences in elementary school outcomes between children who had vs. had not attended Head Start as four-year-olds.  They also ignore research showing negative impacts on children who receive child care supported through the federal child development block grant program, as well as evidence that the universal pre-k programs in Georgia and Oklahoma, which are closest to what the Obama administration has proposed, have had, at best, only small impacts on later academic achievement.

Here I want to draw your attention to a newly released study of Tennessee’s Voluntary Pre-K Program (TN-VPK). TN‐VPK is a full day pre-k program for four‐year‐olds from low-income families.  It has quality standards that are high and in keeping with those proposed by the Obama administration under Preschool for All, including the requirement of a licensed teacher in each classroom, no more than 10 children per adult, and an approved and appropriate curriculum.

The study, conducted by a stellar team of researchers at Vanderbilt, began in 2009.  It is a randomized trial (the gold standard for evaluating program impacts) involving about 3,000 four-year-olds whose parents had applied for their admission to oversubscribed TN-VPK programs.  A lottery was used to select those to whom an offer of admission was made.  Those winning the lottery constitute the intervention group.  Those losing the lottery constitute the control group.  Only about a quarter of children in the control group found their way into other center-based programs such as Head Start or private pre-k, so the study compares groups that are very different in their levels of access to early childhood education.

An intensively studied subset of about 1,100 children drawn from both groups was directly tested on cognitive skills, such as knowledge of vocabulary, at the beginning and end of the pre-k year and at the end of kindergarten and first grade.  These same children were rated by teachers at the end of first grade on a number of non-cognitive characteristics, such as the ability to play well with other children and work independently.  Outcomes for the full sample of 3,000 children were only available with respect to data routinely collected by schools and part of state administrative records, such as days of school attendance and special education status.  I focus here on the findings for the intensively studied subset of participants.

The research team previously reported positive impacts on cognitive measures favoring the TN-VPK participants at the end of the pre-k year.  The recently released findings are with respect to how TN-VPK participation affects children’s later performance in kindergarten and first grade.  The whole justification for investing in pre-k is that it provides long-term benefits, so these follow-up data are critically important.

The first figure below illustrates the impact of TN-VPK participation on cognitive abilities at the end of first grade (kindergarten findings are very similar).  The impacts are presented as effect sizes (which represent the differences between groups in standard deviation units) for eight measured outcomes across the domains of literacy, language, and math.  An effect size that is larger than zero favors the participants in the TN-VPK whereas a negative effect size favors the control group.  As the figure shows, seven of the outcomes are negative, with one (quantitative concepts) being statistically significant.  In other words, the group that experienced the Tennessee Voluntary State Pre-K Program performed somewhat less well on cognitive tasks at the end of first grade than the control group, even though ¾ of the children in the control group had no experience as four-year-olds in a center-based early childhood program. 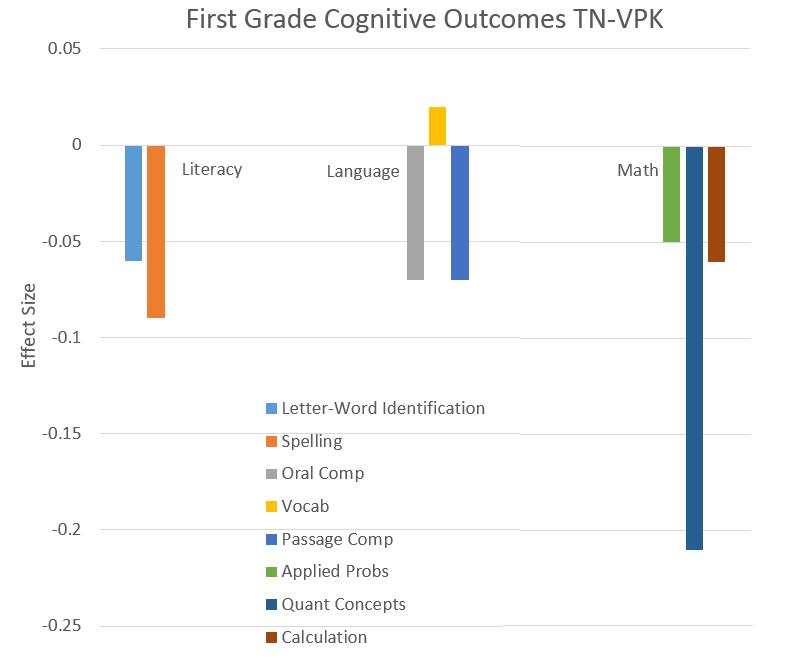 What about social/emotional skills and dispositions as rated by teachers?  The following figure presents those results, again at the end of first grade.  None of the differences is statistically significant.  Four of the seven signs are negative, meaning that the control group scored better than the pre-k group.

Finally, what about differences on routinely collected school records?  Here the results are mixed.  Participants in the TN-VPK were less likely to have been retained in kindergarten than non-participants (4% to 6%). In contrast, children served by TN-VPK were more likely to have received school-based special education services than children in the control group (14% to 9% for the full sample – reported results aren’t separated for the intensively studied sub sample).  There were no statistically significant differences between the two groups on absences from school or disciplinary actions.

What do these findings mean? The authors of the study hold out hope that the positive finding on kindergarten retentions means that the TN-VPK had a positive effect on children’s social/emotional development, which will lead to long term positive outcomes like those that were found in the famous Perry Preschool Project (in which, for example, participants were less likely than nonparticipants to have had encounters with the criminal justice system as adults).  This seems to me to be grasping at straws, given the lack of any differences among participants and non-participants in teacher rated social/emotional outcomes, and given other research showing no association between kindergarten retentions and later school performance.  The authors of the study also refer frequently to the prevalence of fade-out of cognitive gains in other research on the impact of preschool programs.  But there is a big difference between the fade-out of group differences on academic and cognitive outcomes somewhere in late elementary school or middle school, which is the pattern in some previous research, versus gains that don’t last even until the end of kindergarten, which is the finding in the present research and the National Head Start Impact Study.

I see these findings as devastating for advocates of the expansion of state pre-k programs.  This is the first large scale randomized trial of a present-day state pre-k program.  Its methodology soundly trumps the quasi-experimental approaches that have heretofore been the only source of data on which to infer the impact of these programs.  And its results align almost perfectly with those of the Head Start Impact Study, the only other large randomized trial that examines the longitudinal effects of having attended a public pre-k program.  Based on what we have learned from these studies, the most defensible conclusion is that these statewide programs are not working to meaningfully increase the academic achievement or social/emotional skills and dispositions of children from low-income families.  I wish this weren’t so, but facts are stubborn things.  Maybe we should figure out how to deliver effective programs before the federal government funds preschool for all.