Business dynamism is the process by which firms continually are born, fail, expand, and contract, as some jobs are created, others are destroyed, and others still are turned over. Research has firmly established that this dynamic process is vital to productivity and sustained economic growth. Entrepreneurs play a critical role in this process, and in net job creation. 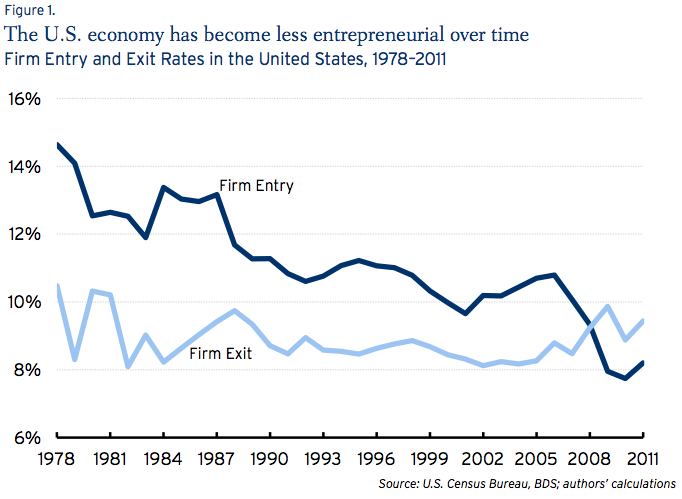 But recent research shows that dynamism is slowing down. Business churning and new firm formations have been on a persistent decline during the last few decades, and the pace of net job creation has been subdued. This decline has been documented across a broad range of sectors in the U.S. economy, even in high-tech.

Here, the geographic aspects of business dynamism are analyzed. In particular, we look at how these trends have applied to the states and metropolitan areas throughout the United States. In short, we confirm that the previously documented declines in business dynamism in the U.S. overall are a pervasive force throughout the country geographically.

In fact, we show that dynamism has declined in all fifty states and in all but a handful of the more than three hundred and sixty U.S. metropolitan areas during the last three decades. Moreover, the performance of business dynamism across the states and metros has become increasingly similar over time. In other words, the national decline in business dynamism has been a widely shared experience.

While the reasons explaining this decline are still unknown, if it persists, it implies a continuation of slow growth for the indefinite future, unless for equally unknown reasons or by virtue of entrepreneurshipenhancing policies (such as liberalized entry of high-skilled immigrants), these trends are reversed.