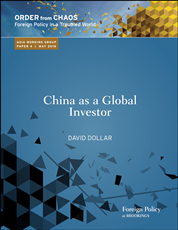 China’s economic rise is one of the factors creating strains in the international financial order. China is already the largest trading nation and the second largest economy. It is likely to emerge in the next few years as the world’s largest net creditor. It is already #2 behind Japan. Until recently, China’s main foreign asset has been central bank reserves, mostly invested in U.S. Treasury bonds and similar instruments. In the last couple of years, however, this pattern has started to change. China’s reserves peaked at about $4 trillion at the end of 2014. Since then the People’s Bank of China has sold some reserves, but the country as a whole is still accumulating net foreign assets as evidenced by the large current account surplus. What is new is that the overseas asset purchases are coming from the private sector and state enterprises, not from the official sector. As investment opportunities diminish in China owing to excess capacity and declining profitability, this commercial outflow of capital from China is likely to continue at a high level.

That a developing country is emerging as the world’s largest investor is an interesting phenomenon that raises the following question: to what extent is Chinese investment similar to other foreign investment and to what extent, if any, is it challenging global norms and practices? This essay argues that there are three ways in which Chinese investment differs from the existing norms and practices:

As China gains more experience as a global investor, it is likely that Chinese investment will, in some ways, become more typical, that it will reshape global norms in other areas, but that it may remain at odds with global practices to some extent.

The lack of reciprocity between China’s investment openness and that of the United States and other large economies is the most worrisome of the trends. A new president will have to take a serious look at the Committee on Foreign Investment in the United States’ (CFIUS) process and the enabling legislation and consider what combination of carrots and sticks would accelerate the opening of China’s markets. In terms of sticks, the United States could consider amendment to the CFIUS legislation that would limit acquisitions by state enterprises from countries with which the United States does not have a bilateral investment treaty. In terms of carrots, the best move for the United States is to approve the Trans-Pacific Partnership (TPP) so that there is deeper integration among like-minded countries in Asia-Pacific. Success in this will encourage China to open up further and eventually meet the high standards set by TPP. Greater investment openness is part of China’s own reform plan but it clearly needs incentives to make real progress.