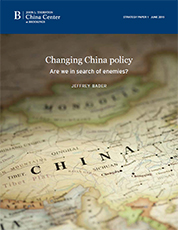 East Asia has avoided major military conflicts since the 1970s. After the United States fought three wars in the preceding four decades originating in East Asia, with a quarter of a million lost American lives, this is no small achievement. It is owing to the maturity and good sense of most of the states of the region, their emphasis on economic growth over settling scores, and the American alliances and security presence that have deterred military action and provided comfort to most peoples and states. But above all else, it is due to the reconciliation of the Asia-Pacific’s major powers, the United States, and China, initiated by Richard Nixon and Henry Kissinger and nurtured by every American administration and Chinese leadership since.

In the inaugural Brookings China Strategy Paper, Jeff Bader evaluates the recent rhetoric towards China, and argues that the United States and China should work out their differences in a way that promotes continued economic dynamism and lowers tensions in the region.