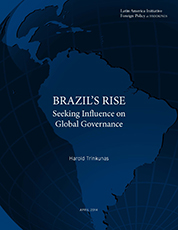 During the past decade Brazil has benefited from an unprecedented set of opportunities to rise as a major power and influence global governance:

• A large economy powered by a boom in commodity exports

Its present economic and political difficulties in 2014 should not be a distraction from its long-term rise as an important player on the world stage.

This paper documents Brazil’s attempts to rise historically in the face of the mismatch between its aspirations, capabilities and opportunities and it shows how Brazil has adjusted its strategy after each attempt with the eventual aim of becoming a major power.

Even today, when it wields considerably greater economic power than at any previous time in its history, Brazil’s participation in global governance is undercut by its reluctance to assume the costs – military or economic – that are required for shaping and maintaining, let alone revising, the present international order. This paper concludes by outlining four steps that Brazil could still take to improve its ability to influence world order, as well as two considerations for U.S. policy makers as they think about Brazil’s rise.