To answer the first question, Light identified and ranked 41 important past government failures (between 2001 – 2014) from a search of news stories listed in the Pew Research Center’s “News Interest Index.”

View our interactive on Government’s Most Visible Failures, 2001-2014 » 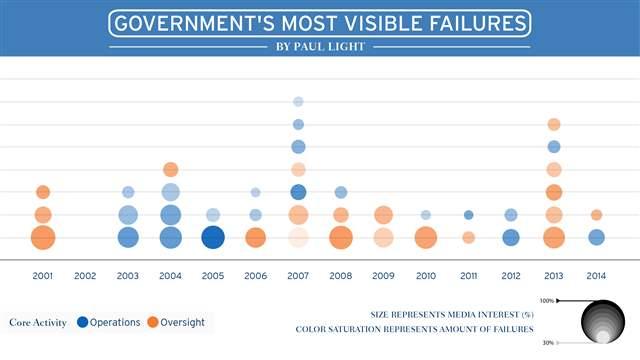 Light finds the following patterns and characteristics in the dataset of significant government failures:

Government can fail for many reasons, writes Light, including some that are well beyond its control. Poorly designed policies come from Congress and the president, for example, and may be impossible to implement regardless of bureaucratic commitment.

The contributors to failure fall into five categories, Light concludes:

WHAT CONGRESS AND THE PRESIDENT CAN DO

What can the president and Congress do to avoid future cascades of failure? Light argues government actors must:

The most powerful incentive for action could be, Light asserts, the delivery grades outlined above, especially if a failing grade came with a full stop on a prized proposal. Tied by rule to an automatic return-to-sender motion, these assessments could prompt Congress and the president to devote more attention to the intersection between vision and delivery.