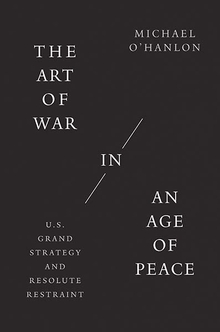 The world is in an age of peace, relatively speaking. Great powers are not fighting each other and haven’t for a long time. But, the expert guest on this episode says, the United States must stay good at the art of war. Senior Fellow Michael O’Hanlon talks about his new book, “The Art of War in an Age of Peace: U.S. Grand Strategy and Resolute Restraint,” published in May by Yale University Press. In it, O’Hanlon presents a national security policy that contends with current challenges like Russia, China, North Korea, and Middle East turmoil, but also calls for attention to new dangers, including biological, nuclear, digital, climatic, and domestic cohesion. In this era, O’Hanlon argues for continued American engagement, military deterrence, and working with allies.

Also on this episode, Senior Fellow Molly Reynolds offers her thoughts on what’s happening in Congress, especially how the filibuster has shaped recent events in the Senate—including failure to establish a bipartisan commission to investigate the January 6 insurrection at the U.S. Capitol—and also how the filibuster will play out in upcoming debates on election reform, lobbying rules, and more. Listen to this part on SoundCloud.