Months since Occupy Wall Street stopped preoccupying Main Street, income concentration at the top continues to feature prominently in the news and politics. The extent to which the incomes of the super-rich dwarf those of the rest of us in “the 99 percent” is difficult to convey. Even the striking statistics on the share of income received by the top fail to provide a useful visualization of what inequality looks like in contemporary America.

Imagine that income corresponds to altitude and that we put the top one percent’s poorest household on the top floor of Dubai’s Burj Khalifa-the world’s tallest building. Its occupation of the 160th floor, 1,900 feet up, would correspond with a pre-tax income of $600,000 in 2010. 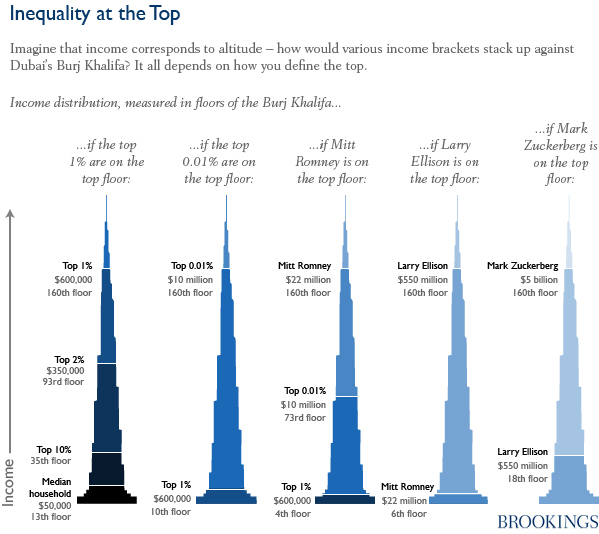 We’re just getting started though. If we put Mitt Romney’s household on the top floor (2010 income: $22 million) and rescale our income ladder, the 99.99th percentile falls to floor 73-less than halfway up the building! The household at the 99th percentile is now slumming it on the fourth floor. The first floor is bursting with the entire bottom 90 percent.

The richest American in 2010 was Oracle founder and CEO Larry Ellison, who received an astonishing $550 million. If we put him on the top floor, Mitt Romney plummets out of the Burj Khalifa like Tom Cruise in the recent Mission Impossible movie-all the way to the sixth floor! The 99.99th percentile now sits on the third floor and the entire bottom 99 percent-and then some-mill around the lobby. We are the 99.99 percent?

But the remarkable conclusion to the exercise is what happens if we put Mark Zuckerberg, co-founder and CEO of Facebook on the Burj Khalifa’s top floor with his likely 2012 income. Analysts estimate that this year, Zuckerberg stands to make $5 billion exercising stock options with Facebook’s initial public offering. With Zuckerberg enjoying the view of the Persian Gulf from the 160th floor, poor Larry Ellison falls to floor 18-just a tenth of the way up the building. Mitt Romney has now ingloriously joined the rest of us in the lobby.

What to make of the mind-blowing extent to which incomes reach stratospheric heights in America? Conservatives often respond that high-end inequality is not as dramatic as the figures for a single year make it out to be. Economic mobility means that those who are super-rich this year are not next year. There is some merit to this point. Zuckerberg made much less than Romney last year and had less money than you did not too long ago. Romney’s income will dramatically fall if he is hired for the job he is pursuing.

Liberals, on the other hand, look at the picture I have sketched with revulsion. But there is little compelling or consistent evidence showing that such extreme inequality-as against, say, European levels or the lower American levels of the 1960s-actually harms the middle class or poor. This is not to say that extreme inequality benefits Americans; it may, but it could simply be tangential to the lives of most people. Will Americans be better off in 2013 if Zuckerberg does not exercise any more stock options? Did the rest of us benefit from 2007 to 2009 when the share of income received by the rich fell? If not, how do we know that we were hurt when the share they received was rising?

When the numbers are correctly measured, compensation paid to average workers has kept up with increases in the value of what they produce. The very rich receive much of their bounty in the form of capital gains, dividends, and stock options that depend on the rise and fall in the value of investments, as determined by a global economy of savers. These windfalls reflect one part financial market exuberance (irrational or not, hardly a conspiracy among the rich to take from the rest of us) and one part gains from deferred receipt of income-the cost of getting people to loan out their money when there’s a risk it won’t come back.

In the end, we may think these incomes are simply too high-like knowing pornography when we see it. That’s a normative judgment; liberals who want to make an empirical case actually have to do so.