The jobless rate has dipped to 6.1 percent, and businesses are already complaining about a skills shortage. Earlier this month the Wall Street Journal reported rising complaints by small business owners about their inability to fill critical job openings. Their complaints are not new. Two years ago, when unemployment topped 8%, personnel managers in manufacturing companies grumbled that it was impossible to fill positions requiring specialized skills. The Manufacturing Institute claimed that 600,000 job openings were going unfilled.

We shouldn’t be surprised when shrinking unemployment makes it harder for employers to fill job vacancies. If fewer people are trying to find work, fewer job seekers will show up for interviews and a smaller percentage will come with the skills employers need. In some cases, failure to fill job vacancies will limit how much or how fast a business can expand. Even if customers are eager to buy more of a firm’s products, the company’s willingness to accept new orders may be weakened by its failure to fill key vacancies.

Throughout the recovery following the Great Recession we saw an abnormally high rate of job vacancies given the level of the unemployment rate. If past experience was a guide, the job vacancy rate we saw was consistent with an unemployment rate that was 1.5 to 2.0 percentage points lower than the one we actually experienced. The high rate of vacancies relative to unemployment suggests either that employers have become less efficient in filling vacancies or are facing more difficulties uncovering applicants with the skills they need. Their hiring methods may need an overhaul. Alternatively, today’s job seekers do not have the mix of skills needed by the nation’s expanding employers.

So far as I know, few researchers have looked carefully into the efficiency of company personnel departments. There is little information about whether employers nowadays process job applications more slowly or less effectively than they did in the past.

The second theory—the skills mismatch hypothesis—has received greater scrutiny. Economists have examined the skill mix of workers laid off from shrinking industries and compared it with the mix of occupational skills needed in industries that are growing. The available research on this topic is a long way from definitive. For what it is worth, most credible studies do not find a bigger mismatch than what we saw in past recoveries. However, our information about the skills of job seekers is not detailed enough to know whether their qualifications equip them to fill new positions in expanding industries. In the past 10 years, manufacturing companies have cut their payrolls by 2.2 million workers. The manufacturing workers who lost their jobs and are seeking new ones may lack the specific skills needed by expanding companies, even if their former jobs were in occupations closely related to the occupations that are now growing.

Employers who receive few applications from qualified job seekers might consider making an investment in training. Companies can pay for re-training current employees or training new ones. If the skill needed by the employer is highly specialized, there may be no other practical way to obtain a worker who possesses the needed skill. It makes no sense for unemployed workers to invest in specialized expertise that has no practical value except at one firm. Unfortunately, there is little reliable evidence about employers’ investment in skills or its trend in the current and past recoveries.

To an economist, the most accessible and persuasive evidence demonstrating a skills shortage should be found in wage data. If employers urgently need workers with skills in short supply, we expect them to offer higher pay to prospective new employees who possess the skills. When workers with crucial skills are offered better wages by expanding employers, they are in a strong position to demand better pay from their current employers, even if their own employer is not expanding. Current employers must match the wage offers of growing employers or risk losing their key employees.

Where is the evidence of soaring pay for workers whose skills are in short supply? We frequently read anecdotal reports informing us some employers find it tough to fill job openings. What is harder to find is support for the skills mismatch hypothesis in the wage data. Last week the BLS released its quarterly report on the pay of full-time wage and salary workers. The median full-time worker earned $782 a week in spring 2014 (see Charts 1 and 2). That wage was $6, or 0.8%, more than the median earnings received by workers one year ago. While other wage series show modestly faster gains in pay, there is little evidence wages or compensation are increasing much faster than 2% a year. Even though unemployment has declined, there are still 2.5 times as many active job seekers as there are job vacancies. At the same time, there are between 3 and 3½ million potential workers outside the labor force who would become job seekers if they believed it were easier to find a job. The excess of job seekers over job openings continues to limit wage gains, notwithstanding the complaints of businesses that cannot fill vacancies. 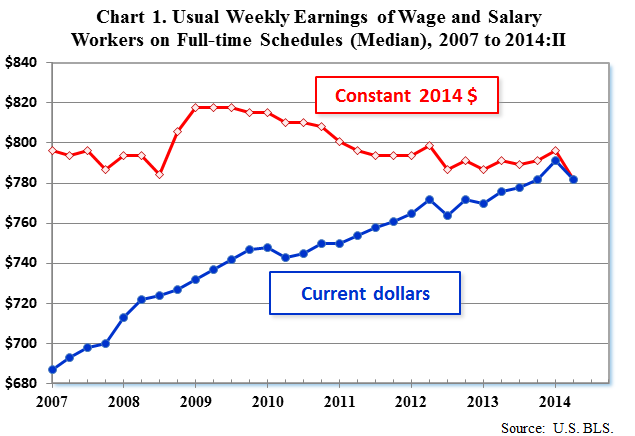 It is cheap for employers to claim qualified workers are in short supply. It is a bit more expensive for them to do something to boost supply. Unless managers have forgotten everything they learned in Econ 101, they should recognize that one way to fill a vacancy is to offer qualified job seekers a compelling reason to take the job. Higher pay, better benefits, and more accommodating work hours are usually good reasons for job applicants to prefer one employment offer over another. When employers are unwilling to offer better compensation to fill their skill needs, it is reasonable to ask how urgently those skills are really needed. 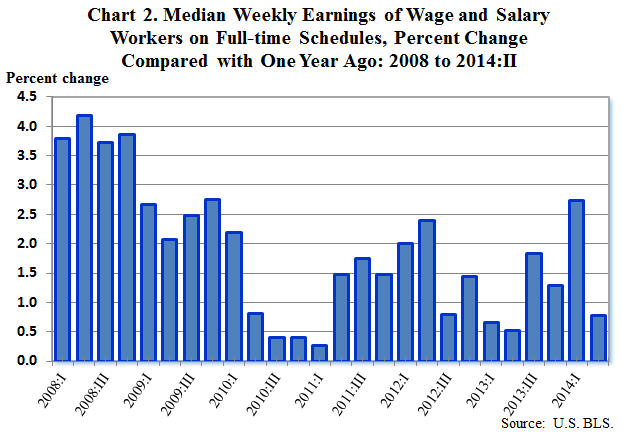