There are now more girls attending school in the developing world than ever before, and the gender gap in education has narrowed considerably. But hold the celebration. Despite the progress indicated by the Millennium Development Goal (MDG) statistics, there are some countries where gender equality in education is still far from being reached. And unless progress is accelerated in those countries, the global goals for education will not be met (figure 1).

Figure 1. Average total years of schooling, ages 25 and above 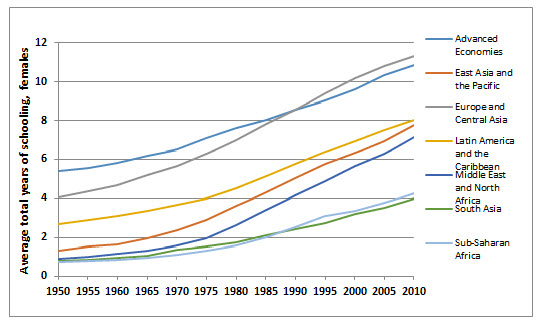 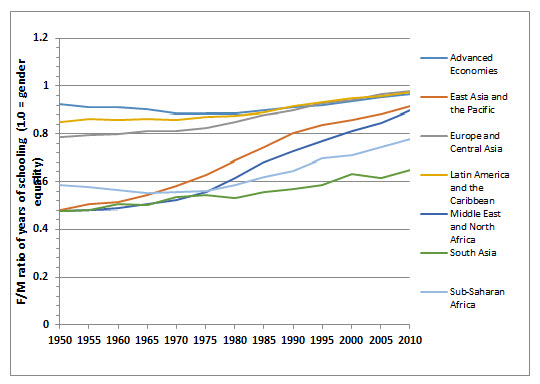 In a June 2015 paper, my coauthor and I distinguished among three different types of gender education inequality that exist across countries, poor and rich alike. There are:

Several of the world’s poorest countries belong to the first group, showing little progress despite the technical and financial support of international development agencies such as UNESCO and the World Bank. In Afghanistan, Chad, Togo, the Central African Republic, and Mali, to name a few, girls’ net enrollment rates at the secondary level are about one-half or less of boys’ rates. This situation warrants the best that development knowledge, experience and resources have to offer.

The anatomy of gender inequality in education

Large gender gaps in basic education translate into sizable disparities in the education of the adult population. For women, little or no schooling can mean a lifetime of not being able to access the information they need to make important life decisions or to protect themselves from harm or destitution. In other countries, where average education numbers look better, there are girls who fare as poorly as those in the worst countries. These are girls who face multiple sources of disadvantage—income poverty, remote residence, disability, and minority ethno-linguistic background. According to household survey data from more than 50 countries, the ratio of rural girls’ primary completion rate is 0.87 to rural boys, 0.76 to urban girls, and 0.61 to urban boys (figure 2). Adding ethnic and linguistic disadvantage paints a more dismal picture. In Bolivia, for example, although the gender gap in years of schooling among the non-indigenous population has disappeared, among the indigenous population that makes up about 40 percent of the total population, rural indigenous women have the least schooling—a total difference of about seven years at age 18. 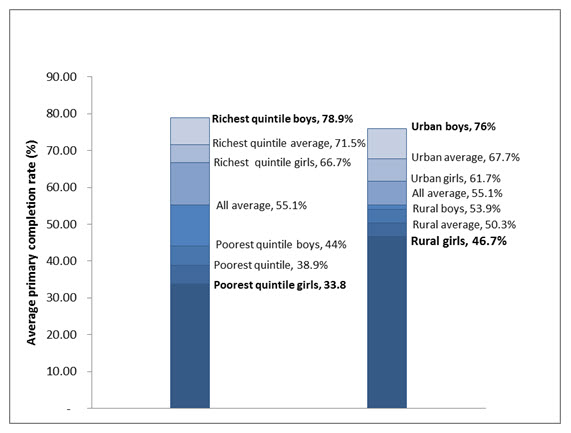 Fewer than 80 countries have data on student achievement, as measured by student performance on international standardized assessments (such as PISA, TIMSS, and PIRLS). There are countries that participate also or only in regional standardized assessments (including SACMEQ for anglophone African countries, PASEC for francophone African countries, and LLECE for Latin American countries), allowing cross-country comparisons within regions. Unfortunately, most countries in Asia and the Middle East do not participate in international or regional assessments. Because the tests are given at different ages or grades, comparing scores across the tests is not straightforward. Instead,  for each test, we can compare the ratio of girls to boys who perform at the highest competency level with the ratio of girls to boys who perform at the lowest competency level. 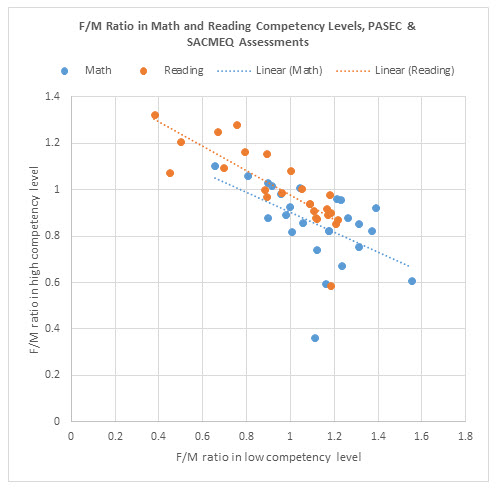 The gender pattern in math and reading scores has been the subject of numerous studies that examine a range of factors: Does it stem from natural differences in biological abilities? Is it due to prejudice in the classroom? Is it due to social attitudes toward girls and women in the home and community?  Of note is that this gender pattern in competencies foreshadow the fields of study that young men and women later choose at higher education levels and the type of work they have as adults. Glass ceilings in the workplace and other areas of society start with glass ceilings in schooling.

Compulsory education laws, the abolition of tuition fees, and support for other costs through scholarships and cash transfers to families have had positive effects on girls’ enrollment and completion rates, but these interventions address mainly the first set of obstacles. To remove the barriers and achieve greater progress in the countries with the worst record in girls’ education, the other obstacles must be addressed too. Other reforms are needed: ensuring that learning happens in order to increase the social and economic returns to education, addressing gender bias in the formal and hidden curricula, and making schools welcome and safe places for girls and boys. Reforms outside the school system are needed too—enacting laws or enforcing existing ones about the minimum age of marriage and addressing gender bias in the workplace. Gender gaps in education reflect, in large part, gender bias in other parts of society and the economy.

A convergence of positive forces accounts, at least in part, for the global progress in girls’ participation and completion rates even in low-income countries. This convergence is worthy of celebration and one we can build on—the emergence and consolidation of political and programmatic support for gender equality in education by civil society, national governments, the media, private sector, and international development organizations. In the last quarter century, grassroots-level action has amplified into national policy debates, donor strategies, media campaigns, multilateral action, and initiatives of increasingly high-profile global advocates.

Education as a sector now has many rigorous evaluations, as evidenced by several recent excellent reviews of education programs (for example, for programs in African countries, see Conn 2014; and Kremer, Brannen, and Glennerster 2012). However, these evaluations do not often disaggregate results by gender. It is important to consider female-targeted programs—those policies that alter the costs or benefits of girls’ schooling relative to boys’ schooling—as well as supposedly gender-neutral interventions, which do not specifically target female (or male) schooling returns or costs but may have gender-differential effects. Policies to improve girls’ education in developing countries have generally focused on increasing the immediate benefits of schooling as well as on reducing the costs of attending school for girls. Policies not directly concerned with education, labor market, and childcare services (such as those providing cash transfers to households), have also been shown to affect schooling incentives and may do so differently for girls and boys.

I also want to highlight here two actions that our paper ends with. The first action we recommend is supporting girls’ and women’s leadership using specific initiatives that are well positioned for engaging diverse actors, including women’s groups, technology companies, media partners, transparency and education NGOs, and government education planning departments. A few examples of these initiatives would be to support women’s groups to monitor the gender impact of education programs and lead efforts to improve gender-specific data in education. These initiatives are envisioned as catalytic “quick wins” that, if given sufficient financial and political support, could bring about sustainable social change not only for girls’ educational opportunities but for gender equality more broadly.

The second action is to pursue systemic reform with gender in mind. Ultimately, the best approach to rooting out entrenched gender biases in education is to ensure that countries have strong education systems, ones that enable all children to have good schools and learning opportunities. Good schools must be places where girls and boys alike must be given the opportunity to thrive and grow. This means a school environment that is respectful and free of violence; teachers are motivated, trained to teach, and gender-fair; infrastructure is adequate and equally accessible to boys and girls; textbooks and other materials are relevant, gender-sensitive, present, and used; all students spend their time in school engaged in learning activities; and support to families that is informed by issues related to gender equality. A reform approach mindful of these gender issues has long been recognized as important, but it needs renewed commitment for implementation in all countries.