The terrifying massacre during last Thursday’s midnight premiere of “Dark Knight Rises” in Aurora, Colorado, is yet another reminder that guns kill many. It is also a reminder that American politicians have failed to act on gun control. Most other industrialized countries as well as emerging ones, and their citizens, understand that guns and semi-automatic assault weapons kill. And unlike the United States, they have passed laws controlling sale and use of these weapons.

Thus, consistent with the importance of evidence-based policy, let me analyze this issue by first presenting the table below on the enormous disparity in gun possession and homicide rates between the U.S. and other countries, then pointing to selected data provided primarily by the Brady Campaign to Prevent Gun Violence, and finally offering a concluding thought on political capture. 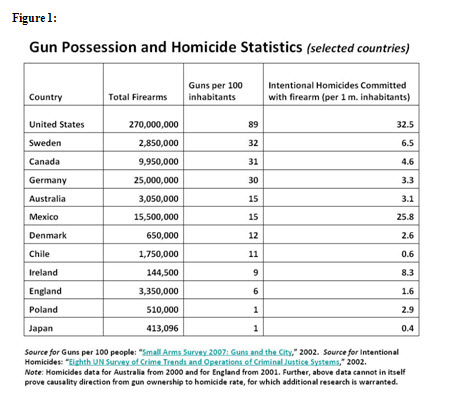 Further, research they cite by Wiebe (2003) indicates that 94 percent of gun-related suicides would not occur had no guns been present. Since keeping a firearm at home increases the risk of homicide by a factor of three, it is not surprising that guns are more likely to raise the risk of injury than to confer protection. In fact, they claim that every year there are only about 200 legally justified self-defense homicides by private citizens.

In short, there appears to be substantial evidence that removing guns saves lives. Interestingly, while the rates of assault with knives and guns in the United States are similar, there are five times as many deaths from guns. And many of these lethal guns can be obtained in the U.S. without a background check. Close to one-half of gun acquisitions in the U.S. occur on the secondary market, and sales between individuals do not require a background check.

For instance, undercover sting operations found that 94 percent of licensed dealers at gun shows in Ohio, Tennessee, and Nevada completed sales to people who appeared to be criminals or straw purchasers, and 63 percent of private sellers at those gun shows sold guns to purchasers who stated they probably could not pass a background check. Furthermore, while lethal “assault weapons” (semi-automatic firearms) have no known civilian use benefits whatsoever, the ban on their use in the United States was lifted in 2004.

Police investigating the Aurora massacre have said that James Holmes, the alleged gunman, had three weapons purchased from stores in the Denver area over a span of two months: a Remington shotgun, a Smith & Wesson M&P assault rifle, and a Glock 40-caliber handgun. The semi-automatic assault rifle, which is a civilian version of the military’s M-16, is designed to hold large ammunition clips, and can fire 50 to 60 rounds per minute. Apparently, in Colorado, James Holmes was able to purchase online 3,000 rounds of handgun ammunition, 3,000 rounds for an assault rifle, and 350 shells for a shotgun without raising any suspicion or facing impediments.

Those are just some of the stark facts.

Yet again, there is a failure of leadership on the issue of gun control. Most U.S. politicians, including the presidential candidates, are keeping mum about gun control. At most they are expressing shock and regret about (yet another) senseless killing spree, this time in Aurora, and trying to provide comfort to grieving families.

Money in politics, and the capture of politicians by special interest groups, such as the National Rifle Association (NRA), continues unabated. The few politicians who dare to speak about the need for stricter gun control laws, such as Congresswoman Carolyn McCarthy, whose husband was killed by a deranged gunman, and Senator Dianne Feinstein, a longtime advocate of gun restrictions, are painfully aware of the fact that they (and other politicians who speak up) are targeted at re-election time by the NRA.

Another exception is Mayor Bloomberg, who is the co-chair of the coalition, Mayors Against Illegal Guns. He also supported New York’s ban on assault weapons and increased the mandatory minimum sentence for illegal possession of a loaded handgun in New York City. During his appearance on CBS’s “Face the Nation” yesterday, Bloomberg challenged Republic Presidential Candidate Mitt Romney and President Barack Obama to explicitly debate the issue and recognize that it is time for the country to do something about gun control. Bloomberg pointed out that in 2004, while Romney was the governor of Massachusetts, he banned assault weapons. However, most recently Romney has opposed all new gun control laws. Bloomberg also called out President Obama for avoiding the issue altogether since entering office, despite vowing three years ago to reinstitute a federal ban on assault weapons.

Leadership on this issue is urgently needed. Presidential candidates should engage in an open debate on this topic even in an election year. Most U.S. citizens are mindful that money will continue to speak loudly, muffling so many politicians that lack courage. This does not justify silence from the U.S. leaders on this paramount challenge.

Has Trump put the Republican party in danger of repeating the 2010 Senate race?