Last month a brief note published on the website of Iran’s Parliamentary (Majles) Research Center raised a stir. It reported on the results of a study done by the Center on the rising enrollment of women in universities, but its tone was alarm instead of praise. The closing of the gender gap in education has been hailed as one of the Islamic Republic’s important achievements (see Mehran 2003, and Salehi-Isfahani and Egel 2007), but inside Iran there are concerns about women taking up precious spaces in universities. Women have outnumbered men in the entering classes of universities two to one for the last several years, but when they graduate they are one-third less likely to work as men, and even lower when they marry and have children. The note mentioned that to remedy the imbalance in enrollments, quotas had been in place for the entering classes in certain fields of study for at least the last two years. A week later the BBC Persian service quoted an official who spoke of a plan to allocate 30% of the slots in the entering class to men and women each and the remainder decided competitively based on scores.

If it has not happened already, this debate may soon begin in other Middle Eastern countries wherein women outnumber men in universities but are much less likely to work. As the culturally designated breadwinners, the conservatives would argue, men have a greater claim on publicly subsidized university education. Affirmative action for men in a region known for patriarchy may sound bizarre, but it is not a possibility that should be dismissed. A logical debate on the value of affirmative action for men based on facts can help avert a policy that would hugely disappoint young women, who see the cards in the labor market stacked against them and who have worked hard for their superior status in higher education. A reasoned debate is not only helpful but necessary because the sharia is silent on this particular aspect of gender relations.

The conservative point of view in Iran seems to be driven by the benefits of quotas for economic development: if men are more likely to use their college skills in production, then they should have greater access to higher education. But the issue of whether public policy can improve on the “market” outcome is not easily settled by looking at differences in the labor force participation of men and women because not all rewards to education are realized in the labor market. In addition, most university slots that women currently occupy are not productive enough for men to want to take them back.

Before I explain why this is the case, let me first dispel the notion that unless something is done the current trend would lead to men’s disappearance from universities altogether. The trend toward “feminization” of higher education is a normal consequence of economic development and is not monotonic. To illustrate this point, in Figure 1, I plot the ratio of women to men in post-secondary education against per capita income for a sample of 136 countries. As the fitted curve clearly shows, the ratio rises with incomes but peaks at about 150, before falling (the fitted curve excludes the few outlier observations greater that 200). 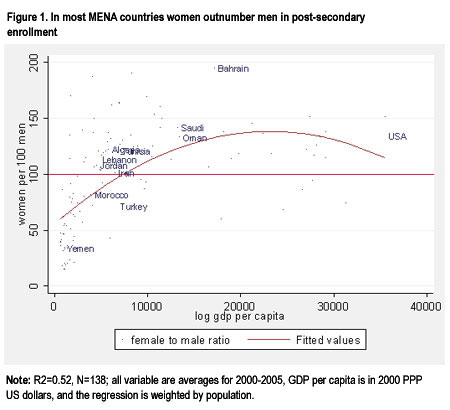 Iran’s ratio of 110 women to 100 men in post-secondary education places it well below the median value of 116 in this sample (Iran’s 2006 census shows a higher figure of 127 women per 100 men in four-year institutions). Three out of four countries, including many Middle Eastern countries, have a higher ratio. The much higher ratios for UAE (324), Kuwait (272) and Bahrain (223) probably reflect the fact that fewer women from these countries study abroad than men. A few developed countries, such as Korea, and all the poor countries have fewer women than men. So, Iran is not the country to be alarmed about overinvestment in women’s higher education, and affirmative action for men is likely to be viewed as a policy that discriminates against women rather than one that maximizes the social benefits of public expenditures on higher education. Recognizing this simple fact should discourage policy makers from plunging into complex social engineering.

There are a number of reasons why women outnumber men in higher education and why the ratio increases per capita income, which I do not have the space to discuss here. One specific reason, which explains why in Iran the value of higher education to women might decline as the ratio of men declines is that in universities, as the only co-ed institutions of education, women have an opportunity to meet men in an environment approved by their parents and the society at large, which most find a superior way to choose a spouse than through arranged marriages. Economists Chiappori, Iyigun and Weiss (2006) explain rigorously why marriage is an important reason for the higher ratio of women to men in universities. Now, if the proportion of men in universities were to drop too far, fewer Iranian women would be willing to spend four years learning skills that they do not intend to use in the labor market.

It is interesting to note that the opposition to women in universities started several years before women outnumbered men. So this is not a matter of the more traditional and conservative law makers in Iran (perhaps the authors of the report among them) not feeling comfortable in relying on the invisible hand to correct the gender imbalance in Iranian universities. Former President Rafsanjani complained in an interview in 2000 of pressures on him to limit women’s access to universities when he was in office in the 1990s:

“They asked why women should study if they are not going to work. And even some radical representatives spoke from the tribune of the Majlis questioning why we should give the seats in universities to women who when they finish their education must go home and take care of children. I said if we have one educated mother without a job she will be effective in the society because of the children that she will educate (Hamshahri January 10, 2000, p.15).”

This is a good segue back to the reasons why the economic arguments for affirmative action for men do not make sense. The first reason is exactly President Rafsanjani’s argument, which is backed with research showing that more educated women raise healthier and better educated children, both of which are essential for economic development (see, for example, Behrman, Foster, and Rosenzweig, Journal of Political Economy, 1999). While male education appears more productive in market production, female education is more productive in production of human capital at home. My own estimates of the effect of mother’s education on child education for Iran show that, all else equal, a one-year increase in the schooling of mothers raises their child’s education by 0.93 years in rural areas and 0.47 years in urban areas (D. Salehi-Isfahani, editor, 2001).

The second reason is that contrary to the argument for affirmative action, women are not taking places away from men. In Iran, a large proportion of women are enrolled in fields such as humanities and social sciences that have low market reward, so men may not necessarily prefer them to work. In 2006, at the Bachelor’s level, about 40% of men studied engineering, compared to 13% of women; 12% of men compared to 27% of women studied the arts, humanities, education and health related fields. This may be one reason why university educated women have much worse employment prospects than men (discrimination is another reason). According to the latest household survey of expenditures and income, women with tertiary degrees are three times more likely to be unemployed than men (35% compared to 12% unemployment rate for women and men with tertiary education). At least so far, women are not pushing men out of the highest paying field of engineering. Even in the softer fields where women predominate, the assumption that women are taking slots away from men is hard to justify given the low employment prospects in these fields.

Mehran, Golnar (2003), “The Paradox of Tradition and Modernity in Female Education in the Islamic Republic of Iran”, Comparative Education Review, vol. 47, no. 3

“The Gender Gap in Education in Iran: Evidence for the Role of Household Characteristics,” in D. Salehi-Isfahani, editor, Labor and Human Capital in the Middle East: Studies of Markets and Household Behavior, Reading, U.K.: Ithaca Press, 2001.