While there are many theories about the cause of autism, the truth is that apart from some uncommon genetic syndromes such as tuberous sclerosis and fragile X syndrome, no one really knows what causes it. Every major scientific body has rejected any link between vaccines and autism, which is only one of many bogus explanations for the condition. In the past, well-known psychiatrists falsely blamed “refrigerator” mothers—so called because they were supposedly cold to their children. More recently, some blame a mother’s age for a higher risk of autism, but it’s possible that older mothers are just more attuned to the warning signs of developmental problems in children. Media reports still tout all sorts of possible links, including mercury exposure, vitamin D intake in mothers, pesticides in the environment, too much milk drinking, and even the amount of rain in a pregnant woman’s town.

For years, researchers have wondered why autism affects boys more often than girls, leading to yet another explanation: the so-called “extreme male-brain theory,” advanced by Simon Baron-Cohen of Cambridge University. It goes like this: Men tend to “systematize” (as evidence, Baron-Cohen writes that they are “over-represented in the top-percentiles on college-level math tests”) and women tend to “empathize” (they have better social sensitivity ability). People with autism are fixated on routines and often display stereotypical “systematizing” behavior, and neglect others’ emotional states. Voila! Autism is thus a disease of excessive maleness.

Further, Baron-Cohen believes, it all happens in the womb, when excessive testosterone bathes certain developing fetal brains. This week, his group published a study of a massive bank of amniotic fluid specimens saved from Dutch births in the 1990s, and found higher levels of testosterone in the birth fluids of children later diagnosed with autism. This confirmed the suspicions of some researchers who had noticed that a low index-ring finger ratio—a typically male trait that, if you are inclined to believe that this sort of research has merit, is also more likely in lesbians and insensitive women than in “normal” empathetic women—correlated with higher risks of autism as well.

And yet, even a minor scratching below the surface exposes the flaws in the “extreme male-brain theory.” Take the key data from Baron-Cohen’s latest paper, reproduced below. Yes, there appear to be slight differences in the average amniotic fluid hormone levels (denoted by the black bars) between normal boys (in red) and those who were later diagnosed with autism (green), Asperger’s (blue), and early childhood autism (purple). For unclear reasons, Baron-Cohen didn’t study any girls for this project. However, in the boys he did study, the levels of both male and female hormones were elevated. Even more important: Look at the massive overlap—there are dozens of normal kids with high testosterone levels, and dozens of autistic kids with low testosterone levels. The correlation is so weak as to be almost meaningless. 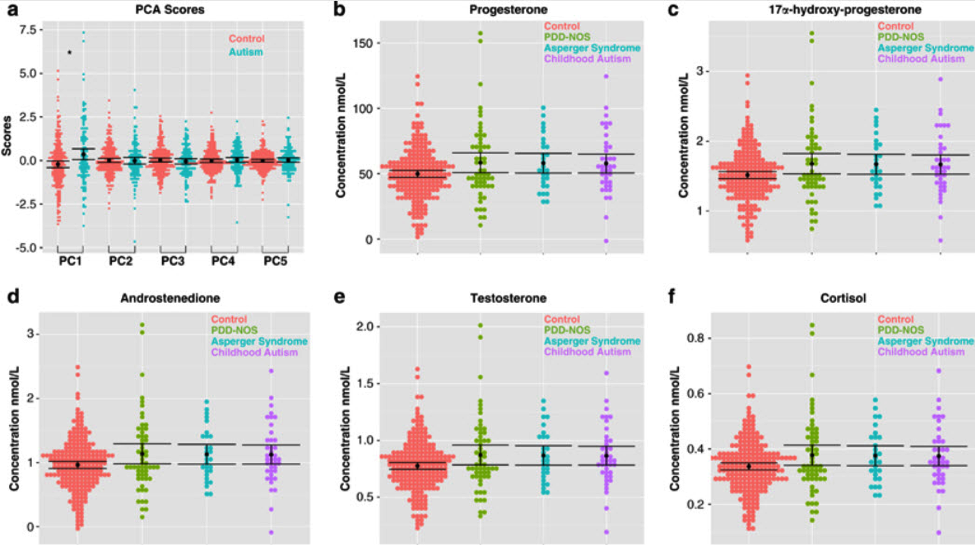 Earlier this year, Danish researchers found no correlation between finger-lengths (often believed to be a proxy for prenatal testosterone load) and autism. In 2012, the journal Nature reported that testosterone given to female volunteers actually improved social cooperation—that is, more testosterone made them more empathetic. And no researchers have been able to show that injecting extra testosterone in animal fetuses increases autistic behaviors.

What to make of all of this conflicting data? In the end, defining autism as out-of-control maleness is overly simplistic. The theory appeals to outdated stereotypes of male and female behavior, and gets reinforced only by selective reading of the scientific literature.

To his credit, Baron-Cohen has said the recent findings shouldn’t encourage women to take testosterone blockers during pregnancy, or ask their obstetricians to perform amniocentesis early in pregnancy to measure testosterone levels. But promoting the notion of autism as a testosterone-disease still may lead to unproven, even dangerous, cures for autism that prey on vulnerable families. For years, for example, the autism quack Mark Geier (who famously promoted a link between autism and vaccination) treated autistic children with the injectable drug leuprorelin (Lupron) to perform “chemical castrations”—on the theory that autism was just an excess of testosterone. Needless to say, it didn’t work and likely harmed countless children.

Rather than worrying about testosterone in the womb, concerned parents should instead be sure that their pediatricians follow guidelines to properly screen all toddlers between 18 and 24 months of age for autism—here’s a link to the online version of the test—and get early developmental treatment if problems are identified. Unlike the many autism theories floating around, the importance of early diagnosis is supported by scientific evidence.