On Monday, January 30, the Project on U.S. Relations with the Islamic World hosted a luncheon discussion with Professor Akbar Ahmed, the Ibn Khaldun Chair of Islamic Studies at American University and a nonresident senior fellow at Brookings. Ahmed discussed his new book project, which he said would use an alternative paradigm to examine the relationship between the periphery (in particular, tribal societies) and the center (i.e., the state) in the Muslim world. The research is an anthropological look at these tribal societies and will try to explain modern Muslim-majority states’ shortcomings in dealing with the periphery. Ahmed added that in his research, he will examine the relationship between these segmentary lineage systems—fully-formed tribal societies that have particular structures to maintain social stability—and the modern state in the context of globalization. Further, he will explore the tensions between tribal societies and the modern state regarding both identity (i.e., national vs. tribal) and religion.


In his book, Ahmed will take an in-depth look at the codes of honor of tribal societies—including courage, hospitality, and revenge—and how these societies treat women and minorities. This examination will be part of Ahmed’s comparative look at the notion of the “other” among different tribal societies. The research will also include a history of Waziristan to better understand some of Pakistan’s tribal societies. In particular, Ahmed will focus on the effects on Waziristan as a result of the Soviet invasion of Afghanistan in the 1980s and the U.S.-led “war on terror” after 9/11. For example, he will examine how Pakistan’s military actions post-9/11 have affected the region’s population. Large swaths of the population not only face daily violence, but their lives have also been entirely disrupted, as they find it necessary to seek shelter outside their homes and villages as internally displaced refugees. Ahmed added that he will conclude his book with policy recommendations for both Muslim-majority and western policy makers.


The discussion also included presentations by American University researchers on the Nuba in Sudan, the Rohingya in Burma, and the Kurds in Iraq. The question and answer session focused mainly on whether (and how) outside forces, especially the United States, can play a constructive role in mitigating the tensions between the periphery and the center in Muslim-majority countries. 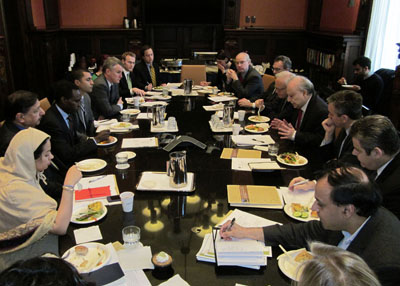 Ambassador to the United Nations, Organization of Islamic Cooperation

Contact
Project on U.S. Relations with the Islamic World
(202) 238-3506
usislamicworldforum@brookings.edu