North Korea’s threats against the outside world have reached new heights in recent months, triggering mounting concern across Northeast Asia about the possibilities of instability, crisis and even war. Yet there is nothing especially unusual or new in North Korean statements and actions, even if its recent behavior seems particularly extreme and worrisome. Its conduct reflects the isolation and deep frustrations of leaders in Pyongyang, the persistence of dynastic rule in North Korea, its economic weakness in relation to its neighbors (especially the Republic of Korea) and the unwillingness of outside powers to legitimate the DPRK’s claims to status as a nuclear-armed state.


On April 23, the Brookings-Tsinghua Center hosted a public event for Dr. Jonathan Pollack, senior fellow and director of the John Thornton China Center at the Brookings Institution. Pollack is a specialist on East Asian international politics and security. His latest book, No Exit: North Korea, Nuclear Weapons, and International Security, was published in May 2011 by Routledge for the International Institute for Strategic Studies. In his remarks, Pollack briefly reviewed North Korea’s political history and assessed how Chinese views of the DPRK have shifted in recent years, and then weighed in on how North Korea’s future could affect Northeast Asia as a whole and U.S.-China relations in particular.China is now on the road to redefining its interests on the peninsula and its relationship with North Korea, and to striking discreetly a balance among the various stakeholders, as Pollack indicated.


Ms. Meng Bo, associate director of the Brookings-Tsinghua Center gave the opening remarks for the event. Professor Wang Dong from Peking University shared his insights on North Korea from the perspective of a Chinese scholar. After the program, Dr. Pollack answered questions from the audience. 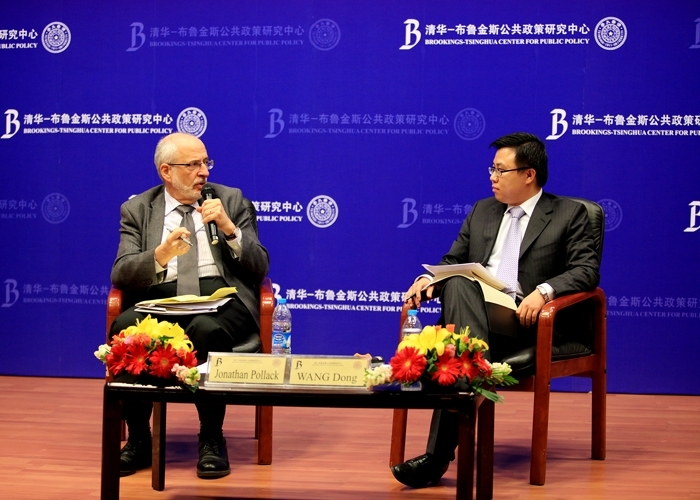