Mega-regional trade agreements such as the Trans-Pacific Partnership (TPP) are swiftly restructuring the global trade environment. Notably, sub-Saharan African countries not party to these deals are missing out in a big way. Lower tariffs, shared standards, and provisions against third-party country participation among TPP member countries will disincentivize TPP countries from trading with those outside the agreement. While Africa searches for ways to remain competitive—largely through regional economic communities and the Tripartite Free Trade Agreement—it will need to create an environment attractive to trade or risk being marginalized within the new global trade regime. For an extensive discussion on Africa’s evolving (and potentially disappearing) role in global trade, see Chapter 5 of Foresight Africa 2016.

At the same time, the U.S. cannot afford to ignore Africa while it also takes part in these mega-regional deals, especially considering the region’s growing middle class and expanding market for U.S. exports. Indeed, the U.S. already has programs to increase trade with Africa: The Trade Africa initiative with the East African Community, the African Growth and Opportunity Act (AGOA), which (in conjunction with the Generalized System of Preferences program) gives beneficiaries duty-free access to U.S. markets for over 7,000 products, and the Doing Business in Africa campaign, which supports U.S. businesses in the region. But are these initiatives enough, especially given China’s and the European Union’s mounting influence on trade in Africa?

On Tuesday, March 1, the Brookings Institution’s Africa Growth Initiative and the Congressional African Staff Association (CASA) hosted an event to discuss the shifting global trade environment and its impact on the U.S.-African trade relationship, specifically addressing how the TPP might affect Africa’s trade with the U.S. and the world; Africa’s priorities when it comes to trade with the U.S.; and how the U.S. might address threats to U.S.-Africa trade. 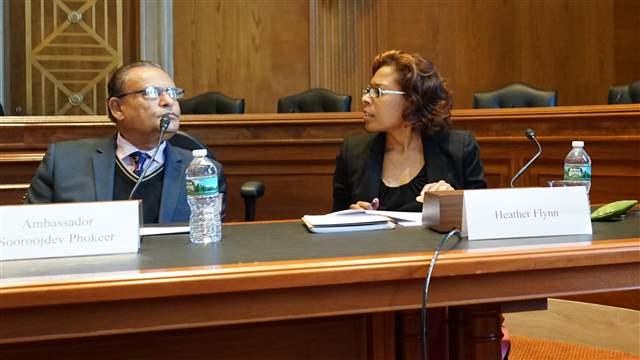 Moderator Heather Flynn asks Ambassador Phokeer about potential examples Africa can follow, who notes Japan and South Korea as examples of success stories, in terms of their ability to use technology and innovation to develop and enter global value chains. Their experiences and lessons learned could help inform African countries as they attempt to further integrate into the global trade regime.

Flynn opened the discussion with the notion that, although AGOA has been the cornerstone of the U.S.-Africa trade relationship, the legislation has been severely underutilized and has not resulted in diversified U.S.-Africa trade. This argument was not lost on Ambassador Phokeer, who remained skeptical of AGOA, maintaining that AGOA’s lack of success has come from its inadequate implementation. Similarly, despite U.S. attempts to promote investment on the continent, Flynn noted, a lack of transparency and overall unfamiliarity with the African context still provide a high barrier to entry. Williams echoed Flynn’s point, noting that U.S. trade with Africa accounts for only 1-2 percent of overall U.S. trade. He agreed that a lack of diversification is a serious problem as well: $5 billion of the $8 billion of U.S. imports from Africa in recent years was oil, and South Africa alone is responsible for 60 percent of the non-oil exports, half of which are cars. Then again, said Williams, there have been significant improvements. Oil has become less important due to changes in the global energy market. In addition, increased involvement in exporting AGOA preference products is stimulating local production of goods such as footwear and apparel in some countries, including Kenya, Tanzania, Ethiopia, and Mauritius. Overall, AGOA brings many advantages to African countries, as the agreement is nonreciprocal, and countries are more able to meet its standards.

But what happens when the trade environment around AGOA shifts? The TPP and likely the EU-focused Transatlantic Trade and Investment Partnership (TTIP) are changing global trade dynamics and—according to Meltzer—Africa’s omission might be leaving the continent in the cold. The TPP, a trade agreement among 12 countries that represents 40 percent of the world’s GDP, offers a number of benefits to its trade partners, including preferential market access, reduced tariff barriers, and more investment opportunities. Since the TPP creates so many incentives to trade with other TPP countries, these countries are likely to turn away from Africa. The TPP will also impact Africa in that its labor and environmental standards, which, according to Meltzer, are likely to become global standards, might be too high for African countries to meet right now. For these reasons, Ambassador Phokeer agreed that the TPP could be very detrimental to Africa. 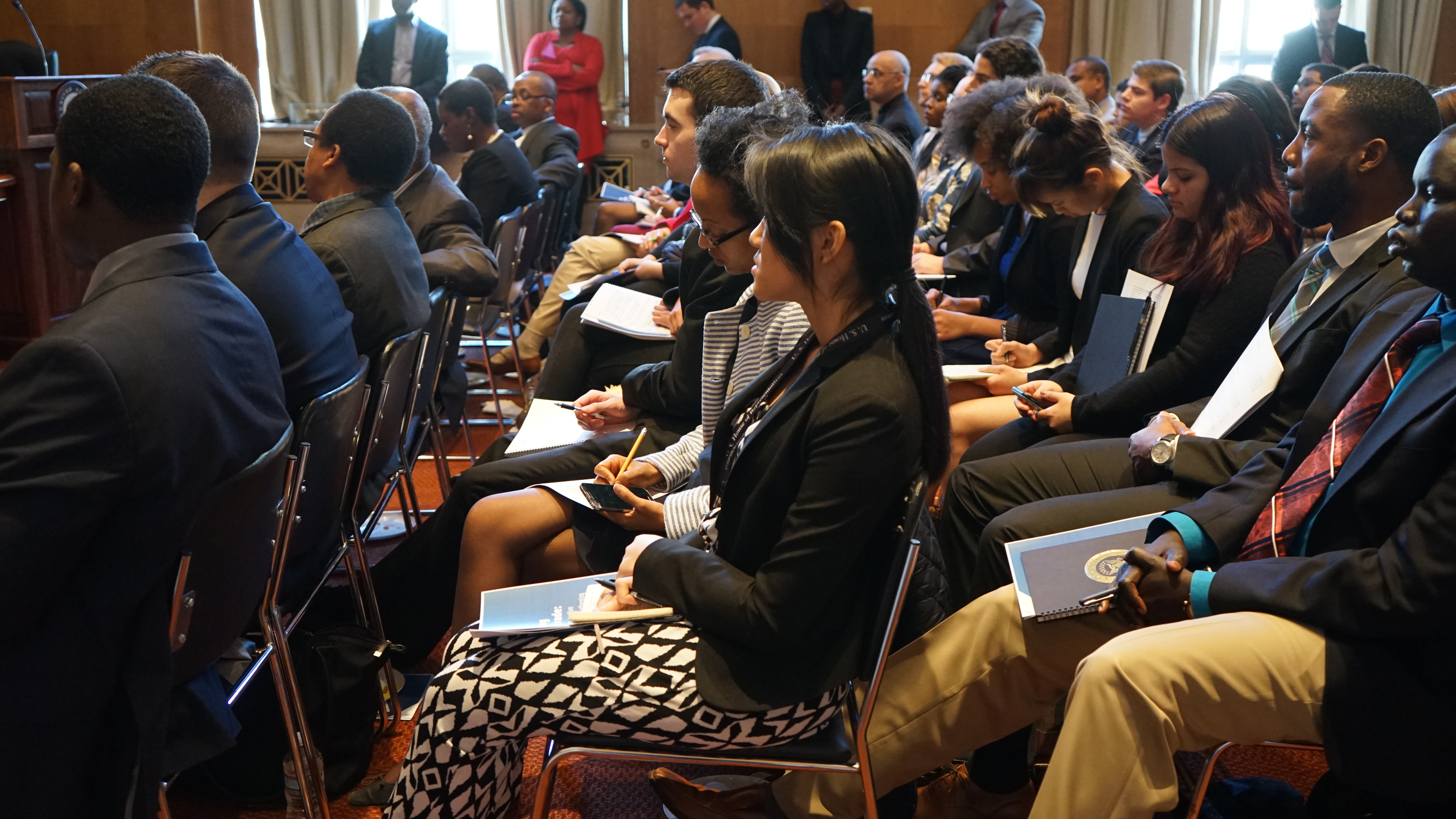 Audience members listen closely as Witney Schneidman highlights the potential for “AGOA strategies” to assist African countries in growing their exports. He noted that Ethiopia, for example, had increased its manufacturing output by only an average of 10 percent per year from 2006 to 2014, but, under an AGOA strategy, its exports increased 151 percent from 2013 to 2014.

The ambassador expanded upon African attempts to increase trade, particularly regional integration and the Tripartite Free Trade Agreement, which launched in June 2015 between the three major African blocs. Regional cooperation, he said, leads to greater capacity to compete, increases innovation, attracts foreign direct investment, increases access to new markets, and increases labor productivity. However, these strategies can only do so much, said the ambassador; policies to prevent brain drain, improve vocational incentives, fight corruption, increase transparency, and integrate Africa into the regional and global supply chain are also vital to making Africa relevant in global trade.

The ambassador also mentioned the continent’s growing trade relationship with the EU and China. Many experts have noted that the U.S. is going to lose out in the long run if it does not make Africa more of a priority when it comes to trade. Schneidman also offered thoughts on how the U.S. might continue to enhance U.S.-Africa trade. He explained that assisting African countries in creating “AGOA strategies” could be a successful way to aid these countries in taking advantage of the legislation, as demonstrated in the case of Ethiopia which increased its exports by 151 percent under its AGOA strategy. That’s not all, he mentioned: Africa cannot be completely shut out from these new global trade regimes. Bringing Africa in, if only as an observer, to the TPP table will help further integrate it in to the global economy.

On Tuesday, March 1, the Brookings Institution’s Africa Growth Initiative and the Congressional African Staff Association (CASA) hosted an event to discuss the shifting global trade environment and its impact on the U.S.-African trade relationship, specifically addressing how the TPP might affect Africa’s trade with the U.S. and the world; Africa’s priorities when it comes to trade with the U.S.; and how the U.S. might address threats to U.S.-Africa trade.

Julie McCarthy
Monday, May 16, 2022
Get a weekly events calendar from Brookings