Some countries, cities, and U.S. states have so far managed to weather the COVID-19 pandemic with relatively few deaths and limited economic losses while others have suffered high death rates and large economic losses, according to a paper discussed at the Brookings Papers on Economic Activity (BPEA) conference on September 24. A few localities don’t fall neatly into either category.

Professor of Economics - University of Pennsylvania

Determining the roles of luck and policy in these health and economic outcomes will be crucial to fighting future pandemics, suggest the authors— Jesús Fernández-Villaverde of the University of Pennsylvania and Charles I. Jones of Stanford University.

In Macroeconomic outcomes and COVID-19: A progress report, the authors sorted localities into groups based on deaths per million residents (through late August) and economic losses (estimated from gross domestic product reports, unemployment rates, and Google maps mobility data).

“Good outcomes really are possible. It wasn’t the case that we all got hit with this thing and we all had bad outcomes,” Jones said in an interview with Brookings. 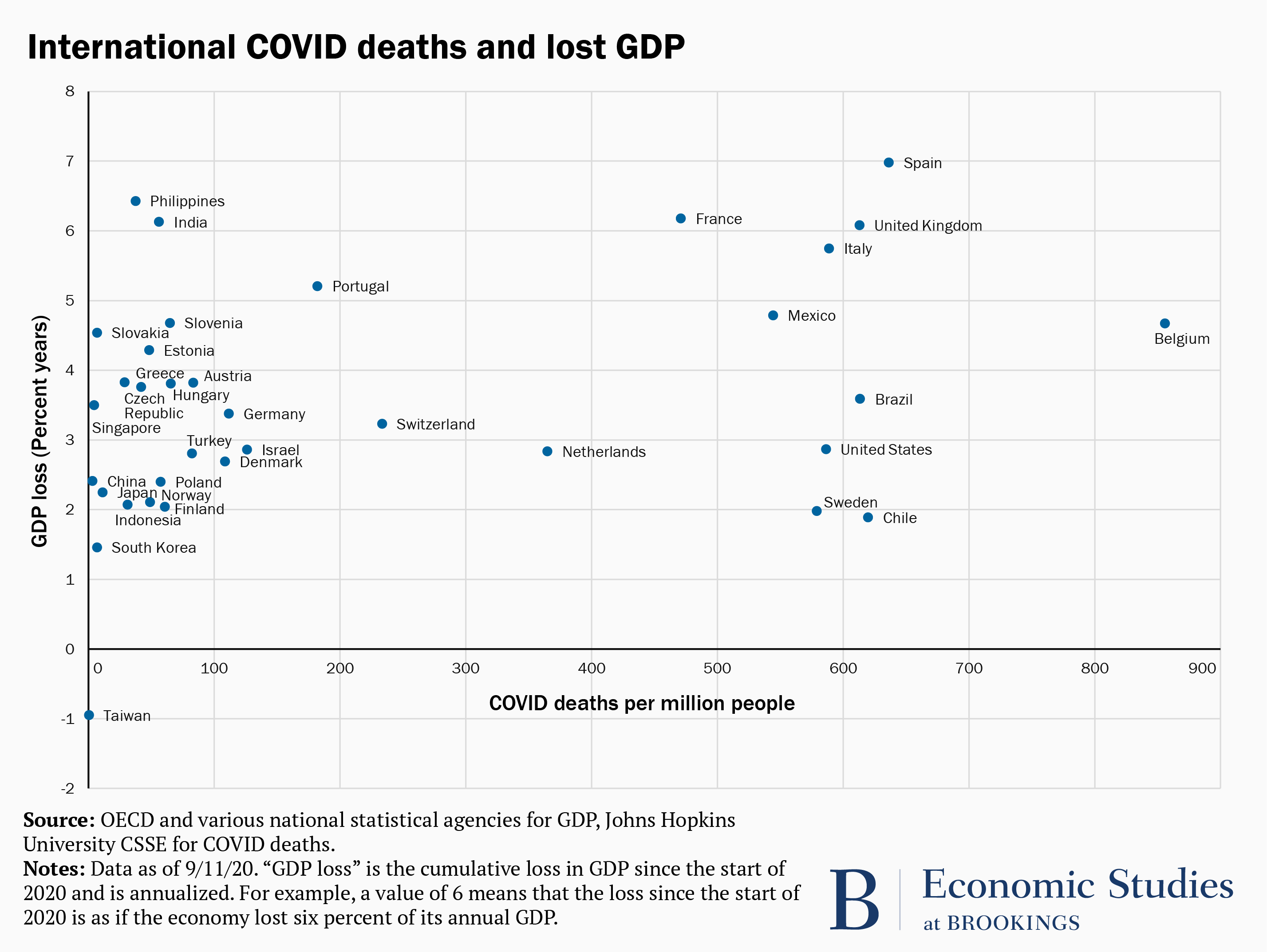 They write that, given current data, it is “incredibly challenging” to determine whether high death tolls were the product of bad luck or bad policy. For instance, South Korea and Germany both implemented early and aggressive testing programs and intensive use of contract tracing. But some evidence tentatively suggests that previous experience with the SARS and MERS viruses helped countries in Asia be better prepared and that COVID sufferers in Germany were younger, on average, than in the rest of Europe.

The outliers from the general pattern—California and Sweden—offer interesting comparisons. California and New York suffered similar economic losses (both saw their unemployment rates shoot to around 15 percent in April) but New York has had 1,700 deaths per million residents and California just 300. Could California have contained the virus with less reduction in economic activity? Sweden suffered death rates comparable to those in Italy, the United Kingdom, and Spain but had much smaller economic losses. However, neighboring countries such as Norway, Finland, and Denmark also suffered only limited economic losses even though they imposed more stringent restrictions than Sweden. They experienced lower death rates: 49 per million in Norway, 60 in Finland, and 107 in Denmark versus 575 in Sweden. Could Sweden also have achieved a lower death rate while still limiting economic losses?

The pandemic is still ongoing, and in six months the relative roles of luck and policy should become clearer, offering lessons for the future, the authors say.

“This may well be the first of other pandemics in the very globalized world we have today,” Fernández-Villaverde said. “If it happens again, we want to be much better prepared.”