What’s the latest in health policy research? The Essential Scan, produced by the Schaeffer Initiative for Innovation in Health Policy, aims to help keep you informed on the latest research and what it means for policymakers. If you’d like to receive the biweekly Essential Scan by email, you can sign up here.

Paul B. Ginsburg and Kavita K. Patel summarize progress made in updating the Medicare Physician Fee Schedule as well as efforts to advance payment reform. The authors contend that the Medicare Access and CHIP Reauthorization Act of 2015 (MACRA) – the bipartisan Medicare physician payment reform that replaced the long-lamented Sustainable Growth Rate (SGR) formula – is well-intended but ultimately self-defeating. They argue that regulations have made it difficult for physicians to participate in advanced alternative payment models and that the Merit-Based Incentive Payment System (MIPS) for physicians not in alternative payment models requires costly reporting that cannot be supported easily by small practices. The authors conclude that while support for payment reform may be high, the reforms made thus far may not be sufficient to achieve the intended results. Full article here. 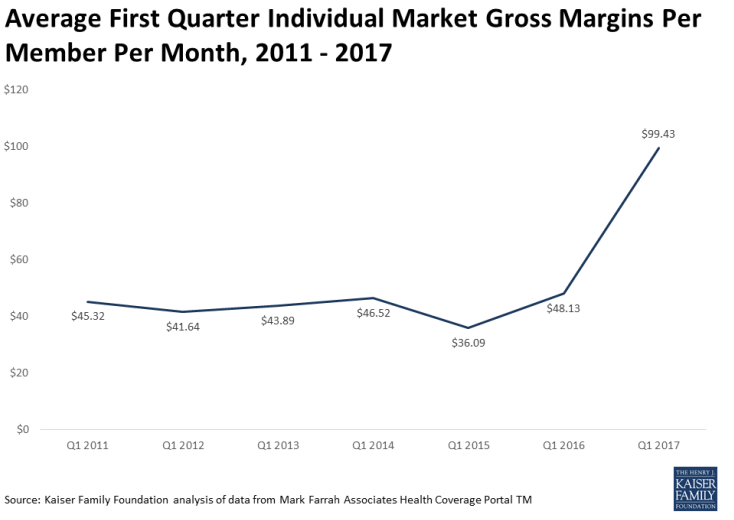 Cynthia Cox and Larry Levitt find that private insurers appear on track to turn a profit in 2017 on their individual market business, on average, following this year’s premium hikes. Data from the National Association of Insurance Commissioners show that average medical loss ratios (the percentage of premium revenue spent on enrollee medical claims) fell from 86 percent in Q1 2016 to 75 percent in Q1 2017, while average gross margins per member per month doubled from $48.13 to $99.43 during the same period. Notably, despite a 20 percent increase in average marketplace premiums for 2017, the authors find no evidence that the risk pool is any less healthy than it was before the premium hikes, suggesting that healthy enrollees did not leave the market in significant numbers. These results indicate that the individual market is stabilizing, private insurers are likely poised to return to profitability in 2017, and that 2017 premium hikes were a one-time market correction that do not foreshadow a coming “death spiral.” Full article here.

Zack Cooper, Fiona Scott Morton, and Nathan Shekita find that patients were treated by out-of-network physicians in 22 percent of visits to in-network emergency departments (ED) from 2011 through 2015. Staffing companies that directly employ ED physicians and contract with hospitals to provide their services face strong incentives to remain out-of-network with insurance providers. Remaining out-of-network allows them to collect higher payouts because patients are often unable to avoid out-of-network physicians during an emergency episode. The authors find that the two leading national physician-outsourcing firms, EmCare and TeamHealth, have distinct strategies that rely on out-of-network billing, increasing a hospital’s out-of-network billing rate by 81 percent and 33 percent, respectively, upon taking over the management of a hospital’s ED. The authors discuss potential policy solutions including a 2014 NY state law that they find decreased out-of-network billing rates by 34 percent. Brookings experts have also proposed a detailed federal solution to stop surprise medical billing. Full article here.

Jean Abraham, Coleman Drake, and coauthors find that Affordable Care Act (ACA) federal marketplace (healthcare.gov) enrollees are particularly sensitive to changes in premiums – enrollment in plans decreased by 1.7 percent for every 1 percent premiums increased (net of subsidies) from 2014 to 2015. In contrast, it has been estimated that demand for employer-sponsored plans decreases from 0.2 to 0.8 percent for every one percent premium increase. If it continues, such high price sensitivity in ACA marketplaces should place downward pressure on premiums, but could increase insurer exits. Full article here.

Expansion of insurance coverage under the ACA had no effect on labor market participation overall; analysis of localized markets shows neutralizing trends

Mark Duggan, Gopi Shah Goda, and Emilie Jackson find that the Affordable Care Act (ACA) substantially increased health insurance coverage and had no significant effect on labor force participation rates. While the authors found the aggregate effect of the ACA on labor supply to be close to zero, their analysis showed countervailing effects in different geographies. Areas with a high share of uninsured individuals who were eligible for subsidies through the exchanges saw declines in labor force participation. In contrast, areas with a large population of uninsured individuals with incomes too low to qualify for subsidies through the exchanges saw increased participation in the labor force. Full article here.

Amid the pandemic, Black and Latino men have experienced the largest drop in life expectancy