The U.S. labor market has been steadily improving for years: the unemployment rate has been falling for nearly a decade to rates not seen since the late 1960s, and we’ve seen the longest streak of private sector job creation on record. Given these impressive headline statistics, it may come as a surprise that unemployed workers have slightly more trouble finding a job than they did at the peak of the last business cycle (in 2006) and have a much lower probability of finding a job than in 2000 (figure 1). 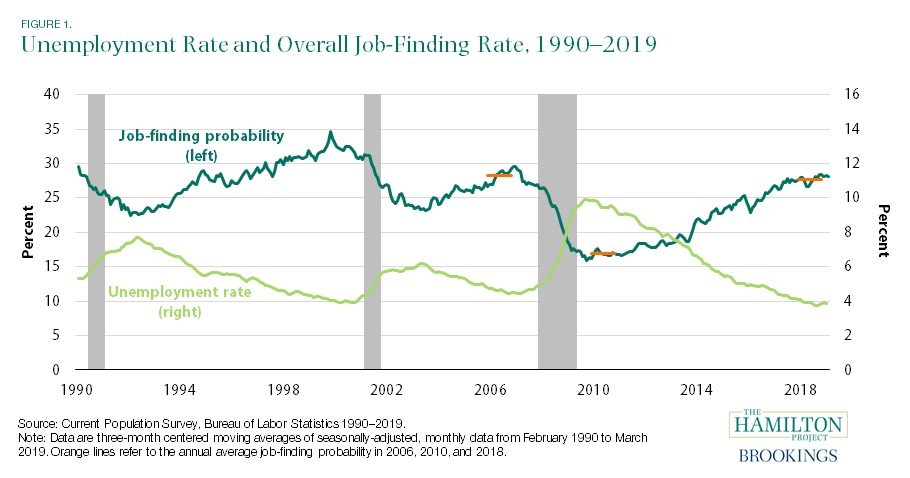 During the late 1990s, roughly 30–35 percent of the unemployed found a job within a month; in 2006, just prior to the Great Recession, the rate peaked at an annual average of 28.3. Over the course of the recession and for many years afterwards, the probability that an unemployed worker found a job would remain relatively low, with an annual average of 17.0 percent in 2010. Only over the last two years has the probability risen back into the 25–30 percent range, and it stood at 27.7 percent in 2018.

However, the job-finding rate is still slightly lower than in 2006 despite an unemployment rate that is nearly a percentage point lower today. To better understand how the job-finding rate has changed over time and why it remains somewhat lower than one might expect, we look at how the probability of finding a job changes with length of unemployment.

Figure 2 shows the job-finding rate by duration of unemployment in 2006, 2010, and 2018 (the prior peak, trough, and current job-finding rates). Across all three years, there is a clear pattern: the longer a worker is unemployed, the less likely they are to get a job in a given month. The short-term unemployed (less than five weeks) are more than three times as likely to find a job in a given month as people who have been unemployed for a year or more. Employers tend to prefer those with shorter spells of unemployment, though views differ on whether this is explained by differing personal attributes, a demoralizing effect of prolonged joblessness, or other factors.

The Main Street Fund: Investing in an entrepreneurial economy

It is helpful to examine the shifting composition of unemployment as well. During the Great Recession, plummeting hiring caused people to be unemployed for a much longer time: the average duration increased from 16.8 weeks in 2006 to 33.1 weeks in 2010 (and hit a high of 39.4 weeks in 2011 and 2012). As a result, the share of longer-term unemployed (people unemployed longer than 27 weeks) rose from 17.6 percent in 2006 to 43.4 percent in 2010, only falling to 21.4 percent in 2018 (figure 3). The increase in the longer-term unemployed from 2006 to 2018 can explain why the overall job finding rate has still not recovered to its prerecession peak despite higher job-finding rates at a given duration of unemployment: more of the unemployed have been so for longer, leaving them with diminished chances of re-entering employment.

As shown in figure 3, the long-term unemployment share remains somewhat elevated. But it is important to note that this is likely not due to an overly generous social safety net—only one state provides more than the standard 26 weeks of unemployment insurance benefits (Montana, 28 weeks), and 7 states provide less (ranging from 12 to 21 weeks). So, individuals unemployed over 26 weeks are not getting unemployment insurance and even many who are unemployed 15–26 weeks will see their benefits expiring. Rather, elevated unemployment durations reflect an economy with fewer startups, less job reallocation, and diminished dynamism more generally. Both job-finding and job-losing have declined over time, leaving the unemployment rate roughly at its 2000 level despite a 4.6-percentage-point decline in job-finding. (Elevated unemployment durations may also have other causes, for example the increase in wage inequality, which leads job searchers to hold out for the highest-paid opportunities.)

Understanding and tracking job-finding rates is important both for the unemployed and those out of the labor force. When job-finding rates are 25–30 percent, many unemployment spells will end quickly, but some can turn into protracted spells that have large costs to both individuals and the economy more broadly. A number of policies—ranging from increasing labor demand in depressed communities to encouraging startups to improved training—could help increase job-finding rates and help make sure that periods of unemployment do not turn into protracted spells.