Throughout 2018, The Hamilton Project has conducted original research and commissioned policy proposals from leading economic thinkers as part of its core mission of promoting opportunity, prosperity, and growth. The Project’s research and policy proposals spanned a wide range of policy issues—ranging from reforming non-compete contracts to reducing chronic absenteeism in schools to advancing place-based policies—all aimed at spurring inclusive economic growth. As the year comes to a close, we present an overview of some of the Hamilton Project’s top figures of 2018.

January: In 2017, the average American worker did not get much of a raise.

To start 2018, The Hamilton Project highlighted a persistent economic challenge: stagnant wages. Our analysis showed that wages in 2017 were only 10 percent higher than in 1973. As illustrated below, in 2017, inflation-adjusted typical hourly earnings grew at their slowest pace since 2012, and were well below the average for the current business cycle. 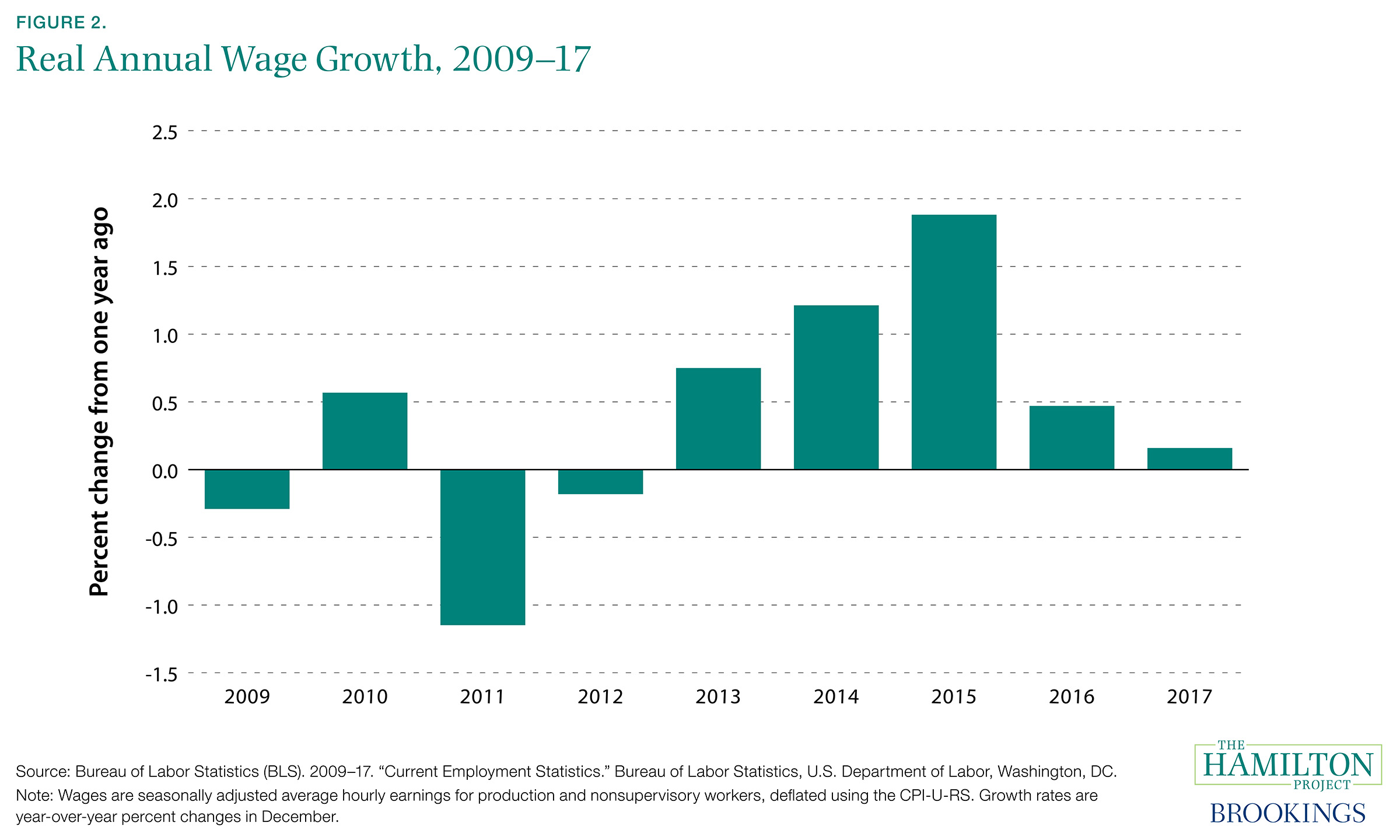 February: Income inequality is the single largest contributor to the long-run divergence between productivity and wages.

Why have wages stagnated while labor productivity nearly doubled from 1979 to 2017? The figure below, which is included in a new Hamilton Project book of policy proposals titled Revitalizing Wage Growth: Policies to Get American Workers A Raise, explores the gap between median wage growth and productivity growth, showing a relatively small role for changes in nonwage compensation (e.g., health insurance) and larger roles for the declining labor share of income and increasing labor income inequality. 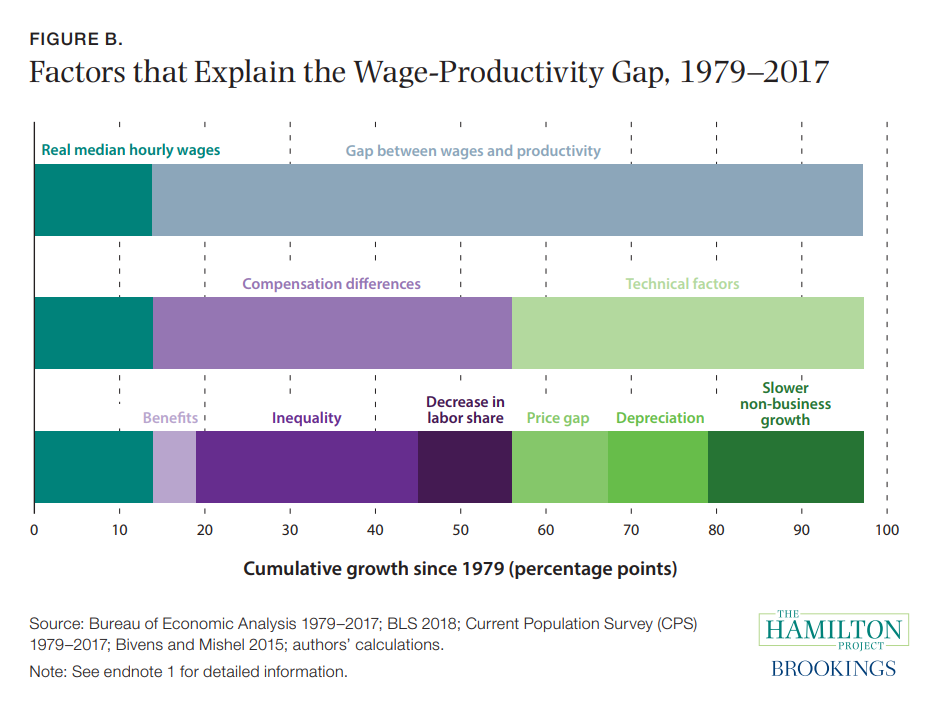 The Hamilton Project extended its work on occupational licensing with an analysis of wage and non-wage differences between licensed and unlicensed workers. As shown below, licensed workers earn more than comparable unlicensed workers throughout their careers, reflecting among other things the barrier to entry represented by licensure requirements that are sometimes more restrictive than necessary to protect the public. 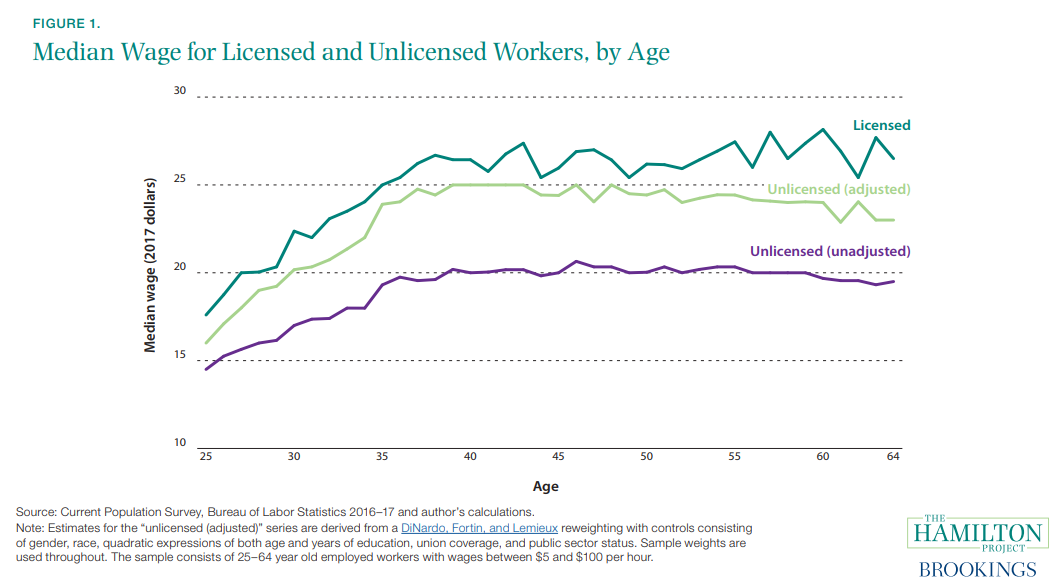 April: High rates of chronic absence are a persistent problem for schools.

In a strategy paper, The Hamilton Project provided evidence for states new school accountability plans, including that schools with a chronic absence problem in one year typically had the same problem in previous years. The figure below shows the distribution of Maryland high schools by the number of years in which more than 10 percent of their students were absent for more than 20 unexcused days. Since the 2002–03 school year, nearly half of the public high schools in Maryland had this high level of chronic absenteeism every single year, while a handful of schools almost never faced these challenges. 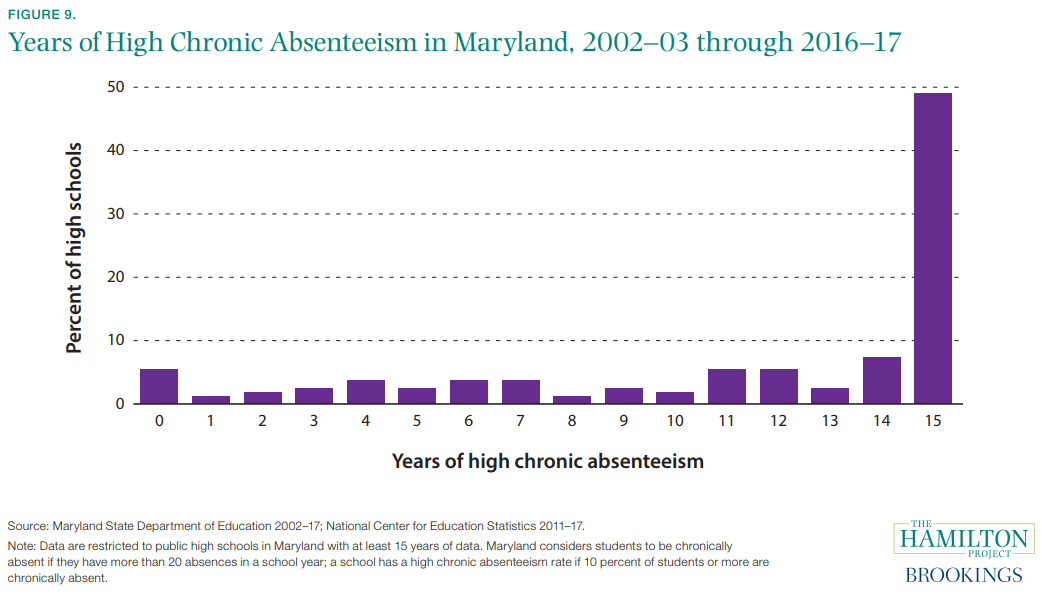 May: Non-compete contracts are often used in ways that are detrimental to workers.

Non-compete contracts, which limit employees’ ability to switch jobs and start new businesses, are a surprisingly common labor market institution with important effects on workers’ mobility and wages. In many instances, non-competes appear to harm workers and limit economic growth. A short analysis based on an earlier Hamilton Project proposal showed that non-competes are often signed well after a job offer is making it difficult for workers to bargain and receive appropriate compensation as part of the agreement.

June: Business dynamism has exhibited an alarming decline, with significant negative effects on workers and the broader economy.

In an analysis that supported several policy proposals, The Hamilton Project documented long-run declines in labor market and business dynamism that have contributed to wage stagnation and weaker productivity growth. As shown below, young firms (left panel) and small firms (right panel) each account for a diminishing share of overall employment since the late 1980s. The decline in young firm employment is particularly concerning given the historical role of startups and young firms in driving productivity and employment growth. 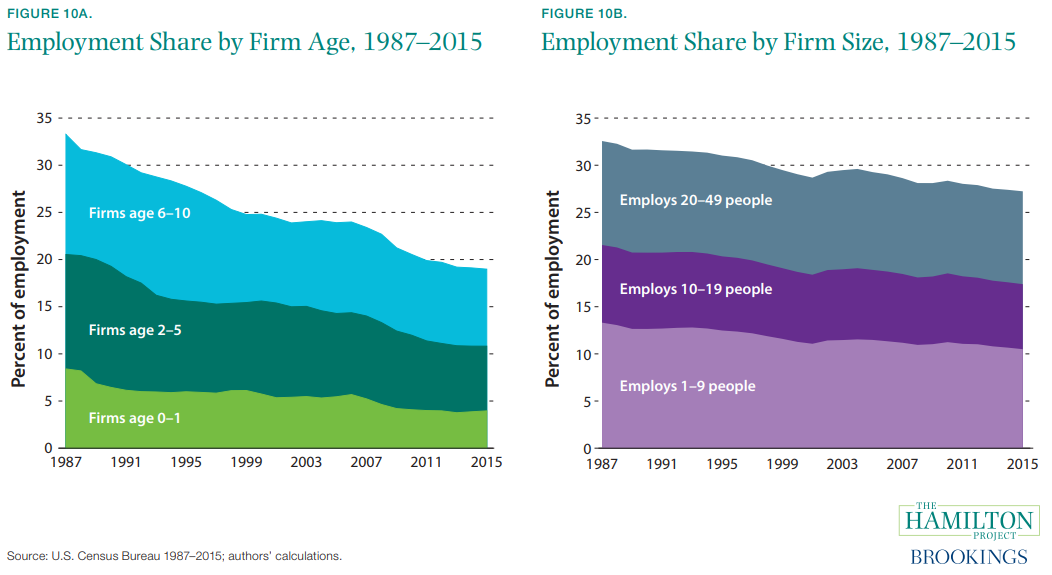 July: The value of your earnings depends on where you live, not just what you do.

Over the past few years The Hamilton Project has released interactive web tools to help workers—and particularly young adults, from college hopefuls to recent graduates—make decisions regarding their education and careers. These educational, occupational, and locational choices matter a great deal to workers’ careers and compensation. The new Hamilton Project web interactive allows users to see how earnings for a selected occupation and age group varies by location, adjusting for cost-of-living and taxes. 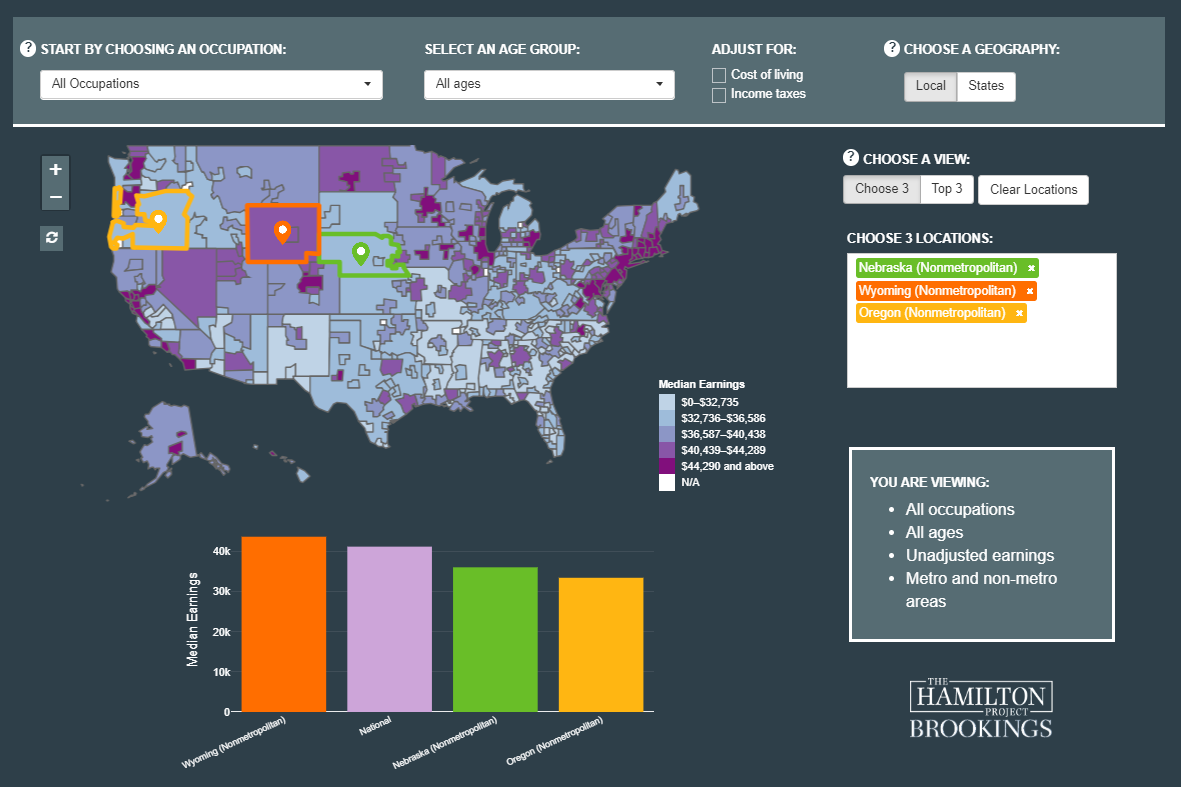 At the end of the summer, students are supposed to go back to school, but millions of children will miss enough school this year to jeopardize their academic progress and ability to graduate. The Hamilton Project released a new interactive that shows rates of student chronic absence for every school, district, and state for the 2015-16 school year overall and by notable student subgroups. This interactive accompanies prior Hamilton Project strategy papers on how to broaden school accountability under the Every Student Succeeds Act as well as an Attendance Works report. 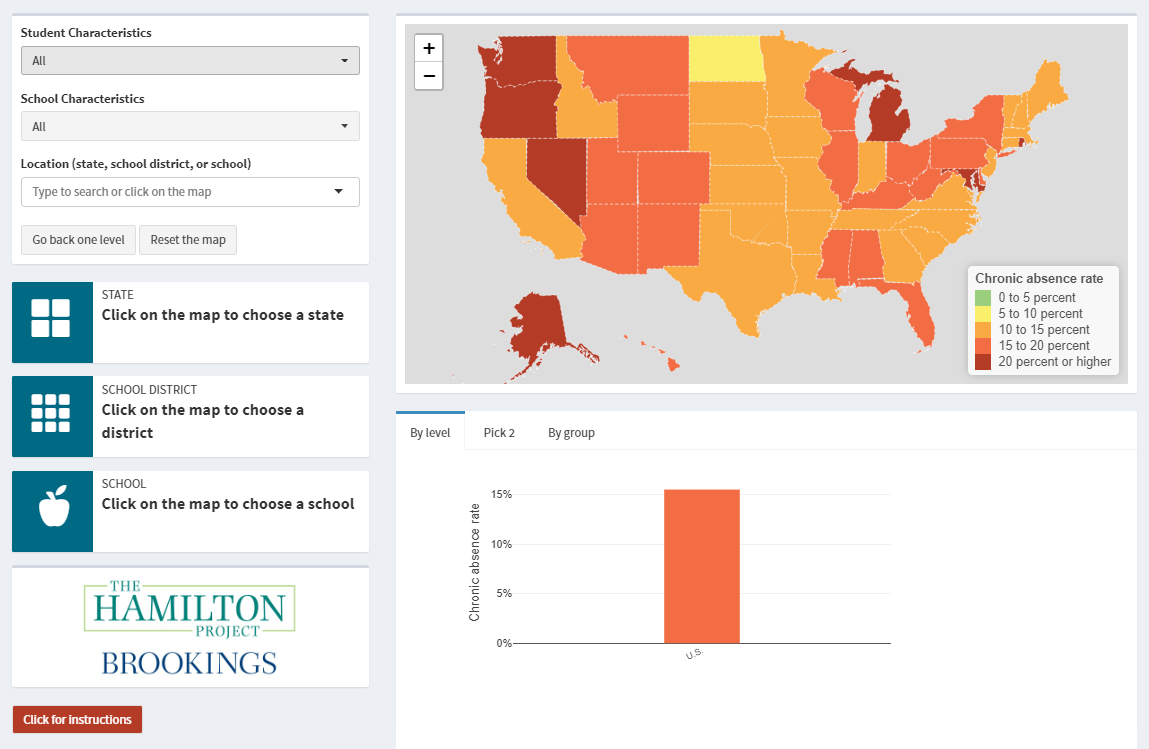 September: Poorer regions have stopped catching up to richer ones.

In the past, large geographic gaps were typically reduced over time as poorer places grew faster than wealthier places and Americans migrated to areas with more opportunity. Since 1980, this convergence has largely ended. The figure below—drawn from a larger analysis of the geography of prosperity—shows that gaps in the per capita incomes of regions remain large and roughly stable over time.

In response to the challenges presented by large geographic gaps, The Hamilton Project released a new book of policy proposals, Place-Based Policies for Shared Economic Growth. This volume offers a reconsideration of place-based policies, proposing a targeted wage subsidy program, reforms to the intergovernmental grant system, an enhanced role for universities in promoting local growth, and new policies drawn from developmental economics research. 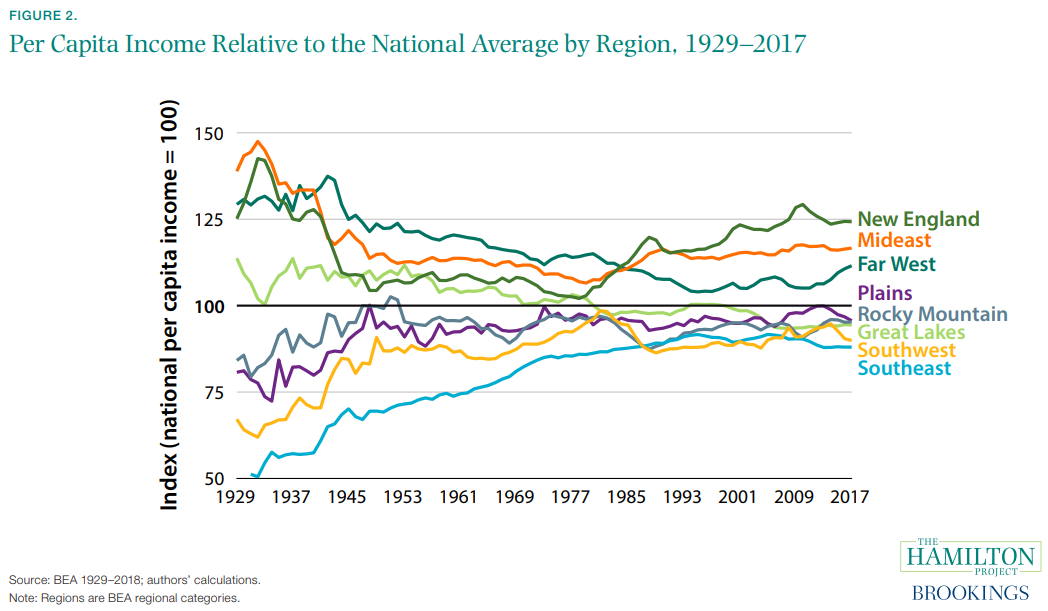 October: Output in the economy is higher and grows faster with more immigrants.

The Hamilton Project produced an analysis of immigrants and their impact on wages, crime, government finances, innovation, and economic growth. The figure below shows the difference in economic growth rates that would result from the implementation of selected immigration policies. The dotted line represents the Congressional Budget Office’s estimate for annual GDP growth for the next ten years, while the three bars—from left to right—show the impact of decreasing immigration flows, deporting currently unauthorized immigrants, and allowing for higher levels of immigration. 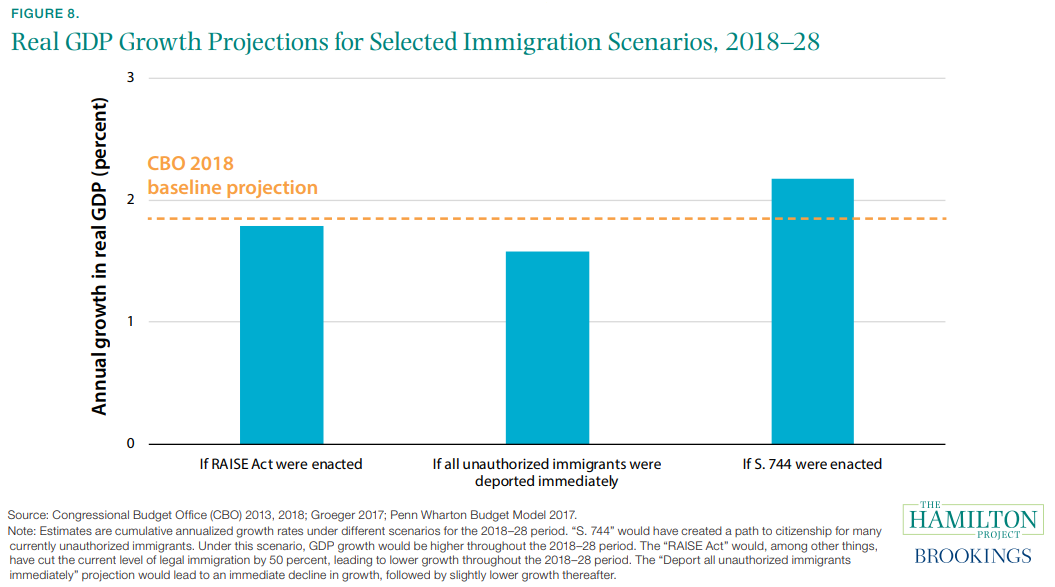 November: Health conditions keep many SNAP participants out of the labor force.

As Hamilton Project research has demonstrated, Proposals for more restrictive SNAP and Medicaid work requirements have made it vital to understand the likely impacts that these policies would have on workers who rely on the social safety net. In November, a follow-up Hamilton Project analysis showed marked differences between labor force participants and nonparticipants on several dimensions of health. Among those 18-49 years old, 88 percent of those stating health is why they do not work reported at least one health-related condition, 74 percent reported a disability, and 80 percent reported taking prescription medication daily. These figures were drastically higher than those with stable work.

December: A national job guarantee could impact tens of millions of low-wage workers

A number of proposals have been made to reshape the U.S. labor market with a national guaranteed job program; these follow on a longer experience with various forms of employment support and active labor market policies. The Hamilton Project aimed to add to this policy discussion with a careful analysis of the labor market considerations relevant to job guarantee proposals. 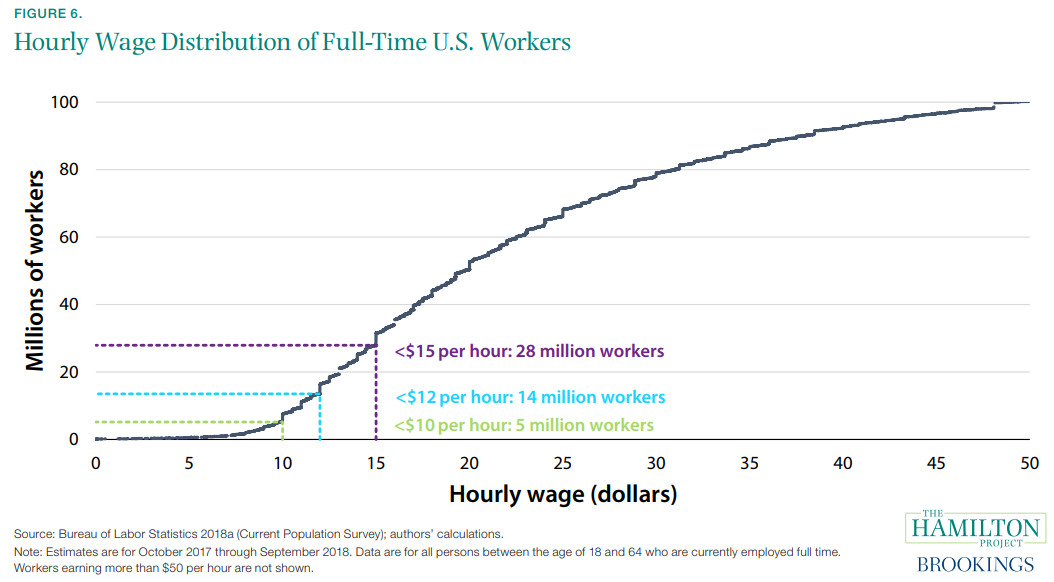