Exploiting variation in the pre-crisis trends in housing prices across U.S. metropolitan areas, Alexander Popov and Luc Laeven of the European Central Bank find that housing booms are associated with decreasing incentives to go to college because there are better alternatives in construction and retail jobs. Specifically, young people from booming areas were 14.5% less likely to go to college than peers in areas where housing prices grew more slowly. The authors also find that housing busts reduce investment in schooling even further because declining housing wealth makes it difficult for parents to finance their children’s higher education.

Poverty can be transmitted between generations through non-cognitive skills

Using data that tracks children’s non-cognitive skills from kindergarten to the 5th grade, Jason Fletcher and Barbara Wolfe of the University of Wisconsin-Madison find that children from low-income families enter kindergarten with lower scores on several different measures of socio-emotional skills and this gap widens very fast as the children age. They find that this difference cannot be explained by children’s health status and suggest instead that some of this effect is a result of higher-income families being able to afford schools where their children’s peers have more advanced socio-emotional skills.

Using quarterly data on capital flows to emerging markets from 1991 to 2014, Barry Eichengreen of the University of California, Berkeley and Poonam Gupta of the World Bank find that “sudden stops” – abrupt disruptions in capital inflows – remain an important economic problem for emerging economies. However, global factors, as opposed to country-specific factors, have become more important in the incidence of sudden stops, and the global factors that matter most have been changing: While changes in U.S. interest rates were relatively important in the 1990s, fluctuations in stock-market volatility played a bigger role in the 2000s.

Chart of the week: Consumer expectations of inflation are trending down 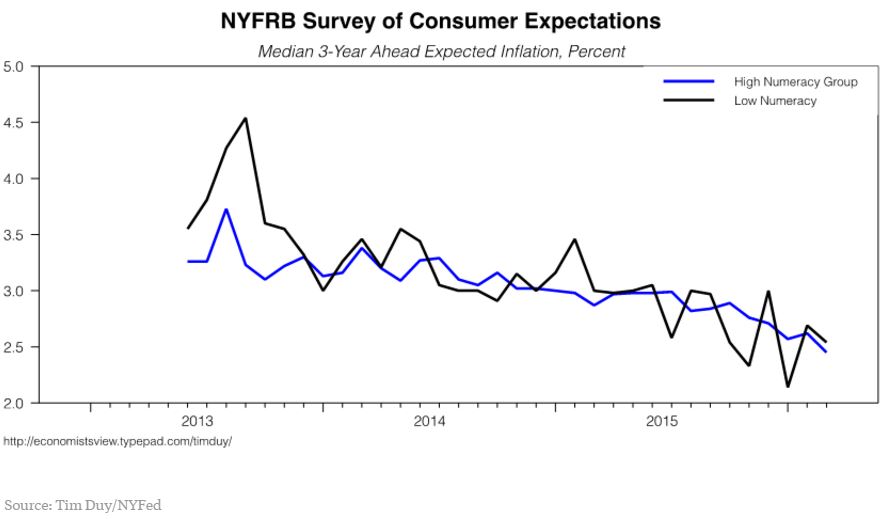 Quote of the week: “We are in a unique situation in terms of inflation,” says European Central Bank official Benoît Cœuré

“We have a combination of strong disinflationary forces, which are the legacy of the crisis (namely: high public and private debt, non-performing exposures of banks, high unemployment and, in general, vast unutilized capacity in the economy), and a series of negative external shocks, especially lower commodity prices, all of which explain why inflation is very low and increasing only gradually. But all other indicators show that our monetary policy is working: credit is improving significantly, both in the volume and cost of loans, and economic activity is recovering. Not strongly enough, but it is steadily increasing.”

— Benoît Cœuré, Member of the Executive Board of the European Central Bank

Enhancing liquidity of the U.S. Treasury market under stress