The persistent and troubling problem of food insecurity, defined as households having insufficient resources to provide adequate food, has far-reaching implications for Americans’ health and economic security. Rates of food insecurity spiked during the Great Recession and have not returned to pre-recession levels.

Fortunately, the Supplemental Nutrition Assistance Program (SNAP), formerly known as food stamps, reduces food insecurity and very low food security, lifts millions of Americans out of poverty, and improves the health and financial well-being of program participants in the near- and long-term.

In a recent study of the introduction of SNAP, Hamilton Project director Diane Whitmore Schanzenbach found that access to the program allowed children to invest more in their own education. The program not only improved high school graduation rates, but also had long-lasting positive impacts, including better health outcomes and, for women, greater economic self-sufficiency. Another recent study found that SNAP participation reduced the likelihood that a household experienced other forms of economic hardship, such as falling behind on housing expenses (rent or mortgage payments), utility bills, or forgoing a necessary visit for medical care. 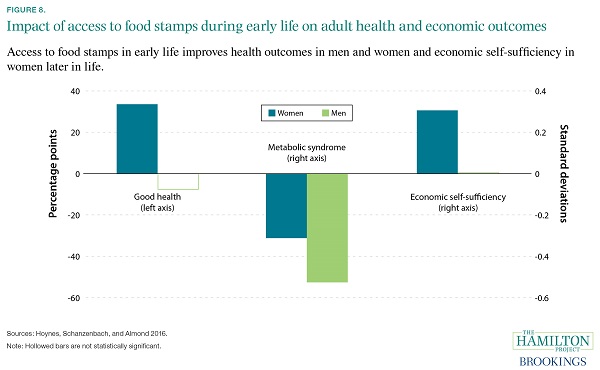 Furthermore, SNAP is highly responsive to the business cycle, serving as an effective macroeconomic stabilizer. A previously released Hamilton Project economic analysis shows that SNAP’s responsiveness to fluctuations in the economic situation has increased over time: when unemployment rates rose in the Great Recession, take-up of SNAP was higher than in any post-1970 recession. As the figure below shows, the American Recovery and Reinvestment Act (ARRA) included a SNAP benefit increase. At the height of the Great Recession, this nominal SNAP benefit increase coincided with a reduction in the rate of very low food security—that is, the share of households that suffered one or more periods during which food intake of household members was reduced or normal eating patterns were disrupted—among households with children. 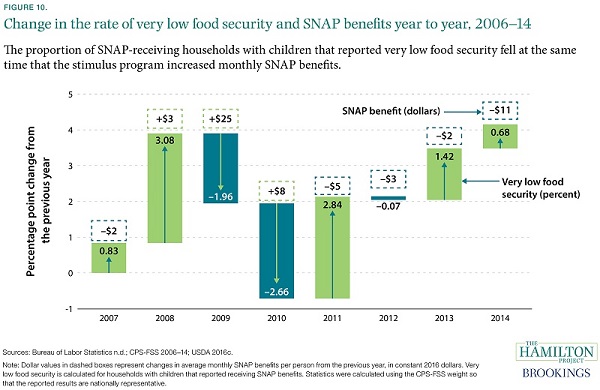 To call attention to the challenge of food insecurity and highlight effective policies for its alleviation, The Hamilton Project has released “Twelve Facts about Food Insecurity and SNAP,” as well as interactive maps exploring state-level differences in the share of children living in households affected by food insecurity. Additionally, in May of 2016 The Hamilton Project will release a new proposal by James Ziliak (University of Kentucky) on reforming the Thrifty Food Plan. In 2013, The Hamilton Project released a related policy proposal by Diane Whitmore Schanzenbach entitled: “Strengthening SNAP for a More Food-Secure, Healthy America.”