Editor’s Note: In the report “

” experts from Brookings and around the world address interrelated debates about growth, convergence and income distribution, three key elements that are likely to shape policy debates beyond the ninth G-20 summit that was held on November 15-16 in Brisbane, Australia. The content of this blog is based on the chapter on Latin America. Read the full brief on Latin America’s growth trends here.

A figure says a thousand words. And, looking at Figure 1, which shows the population-weighted average income per capita in emerging economies relative to the U.S., there could be no doubt in anybody’s mind that since the late 1990s something rather extraordinary happened—a phenomenon with no antecedents in the post-WWII period—that propelled emerging economies into an exponential process of convergence.

Needless to say, this phenomenon had enormous consequences for the welfare of millions of citizens in emerging economies. It lifted more than 500 million people out from poverty and extreme poverty, and gave rise to the so-called emerging middle class that grew at a rate of 150 million per year. 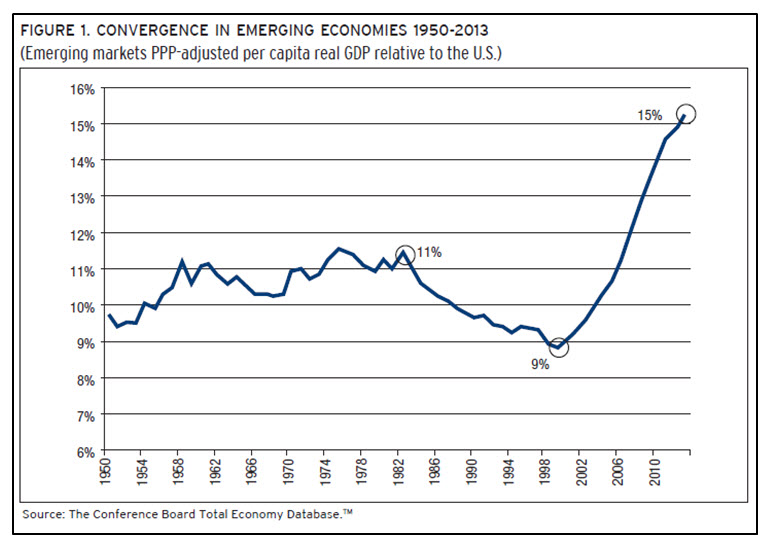 So, it seems that something rather extraordinary happened in emerging economies. Or did it? Let’s look again. When China and India are removed from the emerging markets sample, Figure 1 becomes Figure 2a.

In Figure 2a, one can still discern a period of convergence starting in the late 1990s. But convergence here was not nearly as strong—relative income is still far below its previous heights—and it occurred after a period of divergence that started in the mid-1970s after the first oil shock, in the early 1980s with the debt crisis, and in the late 1980s with post-Berlin Wall meltdown in Eastern European economies.

From a Latin American perspective, the relevant question we need to ask is whether the recent bout of convergence that started in 2004 after a quarter of a century of relative income decline is a break with the past or just a short-lived phenomenon?

According to our definition of convergence,[1] since 1950, growth-convergence-development miracles represent a tiny fraction of emerging countries. Only five countries managed to achieve this: Japan, South Korea, Taiwan, Hong Kong and Singapore. In other words, convergence towards income per capita levels of rich countries is an extremely rare event.

But where does Latin America stand? Based on growth projections for the period 2014-2018, not a single Latin American country will converge to two-thirds of U.S. income per capita in two generations. Unfortunately, the arithmetic does not seem to be on the side of the region.

What about the economics? To answer this question, we analyze whether Latin America’s process of income convergence in the last decade was also associated with a similar convergence in the key drivers of growth: trade integration, physical and technological infrastructure, human capital, innovation, and the quality of public services. Figure 3 illustrates the results. 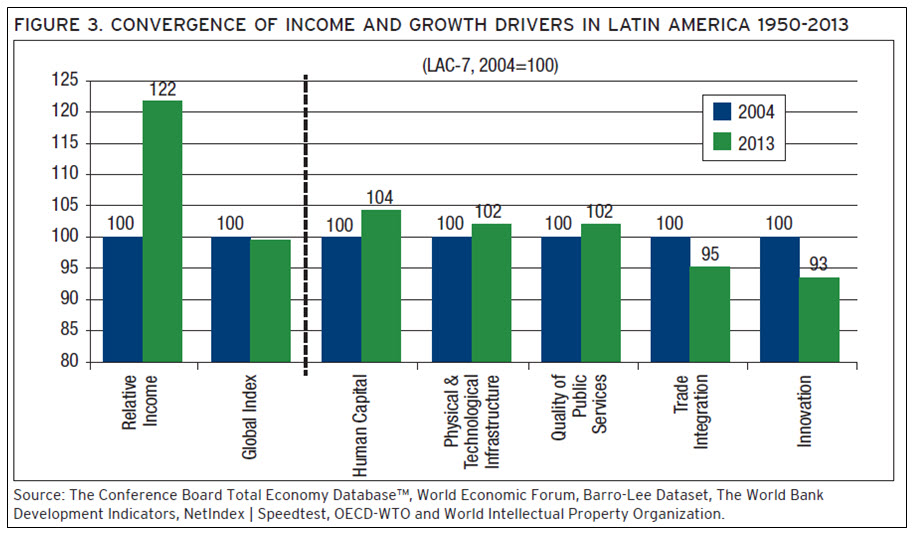 Latin America had a decade of uninterrupted high growth rates—with the sole exception of 2009 in the aftermath of the Lehman crisis—that put an end to a quarter of a century of relative decline in income per capita levels vis-à-vis advanced economies. However, high growth and income convergence were largely the result of an unusually favorable external environment, rather than the result of convergence to advanced-country levels in the key drivers of growth. Fundamentally, the last was a decade of “development-less growth” in Latin America.

With the extremely favorable external conditions already behind us, the region is expected to grow at mediocre rates of around 2 percent in per capita terms for the foreseeable future. With this level of growth, the dream of convergence and development is unlikely to be realized any time soon.

To avoid such a fate the region must make a renewed effort of economic transformation. Although the challenges ahead appear to be huge, there is plenty of room for optimism. First, Latin America has built a sound platform to launch a process of development. Democracy has by-and-large consolidated across the region, and an entire generation has now grown up to see an election as the only legitimate way to select national leaders. Moreover, it is for the most part a relatively stable region with no armed conflicts and few insurgency movements threatening the authority of the state. Second, a sizeable group of major countries in Latin America have a long track record of sound macroeconomic performance by now. Third, the region could be just steps away from major economic integration. Most Latin American countries in the Pacific Coast have bilateral free trade agreements with their North American neighbors (11 countries with the U.S. and seven countries with Canada). Were these countries to harmonize current bilateral trade agreements among themselves—in the way Pacific Alliance members have been doing—a huge economic space would be born: a Trans-American Partnership that would comprise 620 million consumers, and have a combined GDP of more than $22 trillion (larger than the EU’s, and more than double that of China). Were such a partnership on the Pacific side of the Americas to gain traction, it could eventually be extended to Atlantic partners, in particular Brazil and other Mercosur countries.

In the last quarter of a century democracy, sound macroeconomic management and an outward-looking development strategy made substantial strides in the region. If these conquests are consolidated and the same kind of progress is achieved in key development drivers in the next 25 years, many countries in the region could be on the road to convergence.

[2] LAC-7 is the simple average of Argentina, Brazil, Chile, Colombia, Mexico, Peru and Venezuela, which account for 93 percent of Latin America’s GDP.