While all labor cost and competitiveness indexes somehow reflect the fall of employee compensation in Greece, reflecting the success of the Troika policy to internally devalue incomes, the revival of export-led growth anticipated by the Troika has, so far, failed to materialize.

We only need to look at wages in each sector to see that the competitive parts of the economy never suffered from excessive wages in the first place: Reducing private sector wages did little to make the Greek economy more competitive because this was never the real problem.[1] Rather, the main reason why private economy competitiveness was held back centered on rent-seeking regulation that preserved oligopolistic structures in product markets, stifled competition-creating rents, and increased the cost of introducing innovations in production and supply lines, all of which would allow productive ecosystems[2] to evolve and research based innovation to increase.[3]

Ultimately, however, the failure of the internal devaluation to improve Greece’s export performance resulted from increasing costs and placing new risks and burdens on the productive economy that cancelled out any competitiveness gained from the fall in labor costs. For example, as part of the adjustment program Greece had proceeded to significantly increase excise taxes[4] on energy used in productive activities (Figure 1). After increases in energy prices for industrial use of over 60 percent since 2009, according to Eurostat data, Greece is now a country that has a unique combination of high prices in both electricity and natural gas for industrial use, as a result of the unique combination of high taxes (Figure 2) and the politically sanctioned price increases of the state-controlled dominant electricity producer. 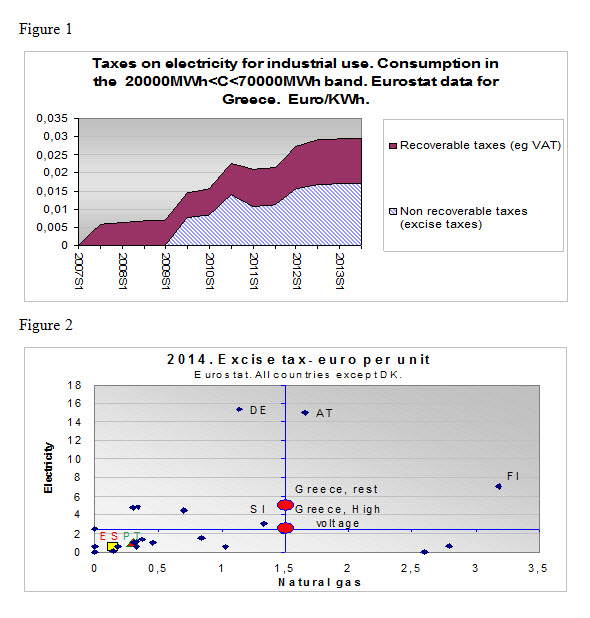 Consequently, industry in Greece has to pay up to 80 percent more for energy than companies pay in other EU countries, meaning labor costs would have to fall 80 percent in energy intensive exporting sectors like steel (Figure 3) if competitiveness levels are to be preserved. 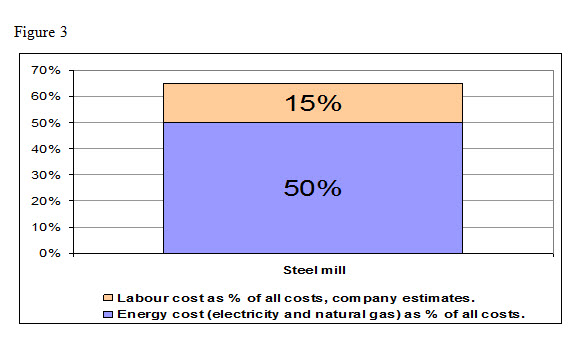 Given the rise in the cost of energy has been greater than the fall in wages through internal devaluation, coupled with the low intensity with which the Greek economy used salaried employment, these sectors faced a net decline in total competitiveness. 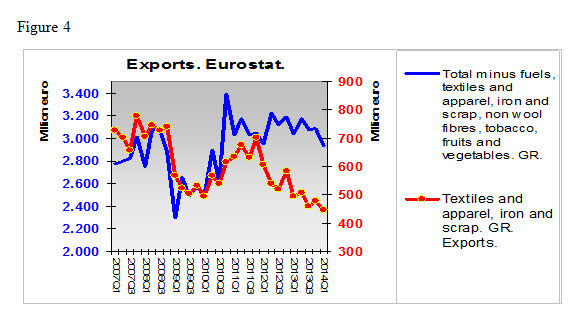 The resulting evolution of exports in energy intensive sectors like steel and textiles is most revealing. In spite of the large fall in wages, the rapid increase in energy costs meant that exports of these commodities, price takers on the international market, plummeted (Figure 4). It is also useful to compare available data on the export performance between Greece and Portugal. Portugal, which has much lower taxes on energy prices for industry, showed a strong export performance after 2009, such as in iron and steel products (Figure 5), while in Greece the rapid rise of energy prices, after all taxes are added, coincided with a stagnation of the related exports after the lag of existing contracts is taken into account. Available data for textiles and apparel shows a similar picture: the sector added significantly to the strong export performance of Portugal, whereas in Greece in the wake of the energy price increases the sector effectively ceased to exist and exports were all but eliminated. These two sectors largely account for the stagnation of Greek non-fuel exports, both as an absolute measure and when compared for example with countries like Portugal (Figure 6), and thus exemplify the failure of the implemented policy mix. 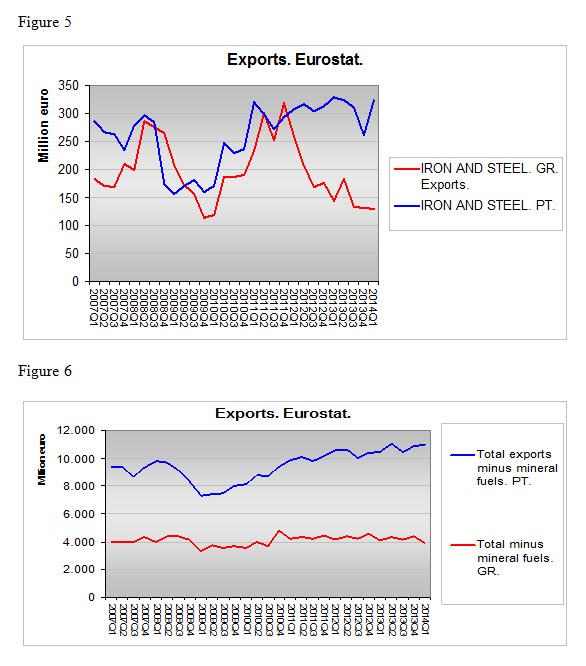 At the same time, the increasing cost of financing corporate loans[5] in Greece (Figure 7) further undermined the so-called aim for an export led recovery. 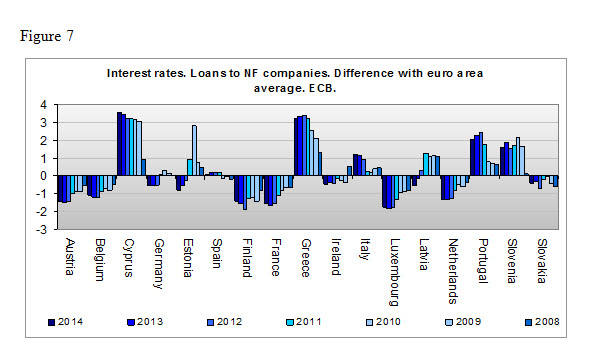 The reluctance of the Greek government to adhere to the agreed reform agenda raised the risk of Greece’s exit from the euro area; this risk was pushed entirely on the productive sector in the form of restricted and expensive financing, putting Greek companies at an acute and persistent competitive disadvantage. The high cost of money and the need to deleverage corporate balance sheets created an uneven playing field in export markets as companies within the euro area were facing a fraction of the costs Greek companies were facing.[6]

If Greece is to benefit from an export-led recovery, policymakers need to tackle all these bureaucratic obstacles and implement progressive structural reforms in critical sectors such as the energy sector. So far, by increasing costs, they have only succeeded in putting sand in the wheels.

[1] Interestingly, the facts here presented are not taken into account in the work of key opinion influencers that comment on the weak performance of Greek exports, like Cinzia Alcidi and Daniel Gros, Why is the Greek economy collapsing? A simple tale of high multipliers and low exports (Brussels: Centre for European Policy Studies, 2012), and U. Böwer, V. Michou and C. Ungerer, The Puzzle of the Missing Greek Exports. Economic Papers 518 (Brussels: European Commission Directorate-General for Economic and Financial Affairs, 2014).

[6] The reading of Eurostat data on energy prices, which include data on excise taxes, has also led to inaccurate conclusions in many cases. The reason is that large industrial energy consumers in most European countries reach individual agreements with energy suppliers, and these agreements include, among others, highly reduced tariffs and special agreements on how to manage operations during times of high energy demand in the system. The prices of these agreements are considered industrial secrets, and are thus not revealed and therefore they do not affect the data published by Eurostat, even though in many countries such agreements cover over 50 percent of industrial energy consumption. In Greece, on the other hand, all consumption of energy is priced at the officially set prices published by Eurostat.