Editor’s Note: In this blog, George Ingram discusses the key elements of the New Deal. For a more detailed assessment of its implementation, read this latest paper,
Implementing the New Deal for Fragile States
.

The g7+ is an association of 20 countries afflicted by conflict and fragility that have joined together to share experiences and lessons and advocate for reform. The New Deal, endorsed at the 2011 meeting on aid effectiveness in Busan, is an accord between the g7+ and donor countries that creates a framework for how those countries can move from fragility to sustainable development. Among key elements of the New Deal are: an assessment of the underlying dynamics of a country’s fragility, a single agreed-upon plan on how to move away from fragility, and a focus on specific elements that contribute to sustainability. While the New Deal compact is an agreement between a g7+ country and donors, the emphasis is on country leadership and ownership with donors playing a supporting role.

The components of the New Deal are: 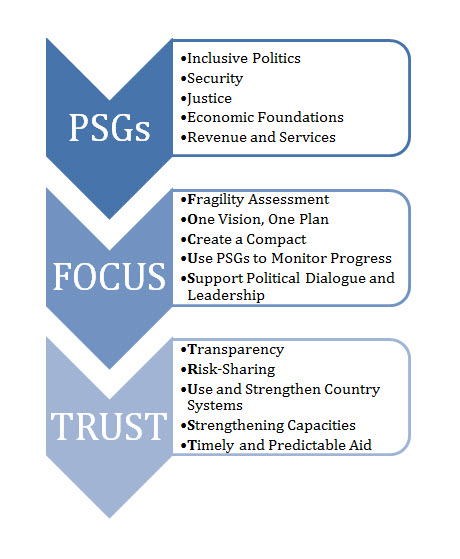 “Implementing the New Deal for Fragile States,” a paper I have recently coauthored with Jacob Hughes, Ted Hooley, and Siafa Hage, is an assessment of the New Deal compact and its results.  The paper is based on extensive interviews with lead staff of the seven g7+ pilot countries, donors, and civil society. The overall conclusion is that the New Deal does provide a framework for countries to move beyond fragility, but it has yet to bring the relevant behavior change by either g7+ governments or donors.

A major shortfall in the implementation of the New Deal is that it has proceeded along a technical rather than a political dimension. The New Deal recognizes that conflict and fragility are fundamentally political, but most of the action has been in complying with some of the components by technical experts rather than engagement at the political level. This is true for both the g7+ countries and donors.  Countries have not convened and shepherded through the necessary national political dialogue to bring together disparate communities, and civil society, which could facilitate reconciliation, has not been sufficiently involved in New Deal processes. Similarly, donors have relegated the New Deal to the technical and managerial level and senior political leaders seldom attend meetings of the New Deal.

A parallel assessment by the International Dialogue on Peacebuilding & Statebuilding (INDPS) reports findings on the New Deal consistent with findings of our report.

Enthusiasm for the New Deal remains strong, but frustration is growing by all parties on the slow implementation and lack of change by all parties. It is critically important that g7+ leaders extend their political leadership of the New Deal and engagement across their entire government, that civil society be accorded its rightful role and be provide with the support it needs to play a constructive role, and that donors become engaged at the senior leadership level and begin to take more risk in engagement with g7+ countries.

The New Deal empowers political and civic leaders in fragile countries to take charge of their country’s future and focused international attention on how countries can move from fragility to sustainable development, including in the discussions of the post-2015 global goals.  It would be a tragedy if this historic initiative failed due to lack of commitment and adequate engagement by g7+ donors, governments, and civil society. It is hoped that this independent assessment, along with that of the International Dialogue, will galvanize renewed commitment and action that will fulfill the promise of the New Deal.