In a set of postings over the last week, I discussed how market stress over the debt ceiling debate was most evident in very-short-term Treasury interest rates. As the October 17th drop-dead date approached, the market started to price in the unthinkable – the U.S. might default, or at least interest payments on Treasuries might be delayed until the borrowing limit was raised (Figure 1). When it seemed that a deal was at hand late last week, interest rates fell. But then talks broke down and interest rates spiked further this Tuesday and early Wednesday (Figure 2) – movements of this magnitude are extremely uncommon and are usually reserved for unexpected Fed policy moves or crises such as Lehman Brothers (Figure 3). 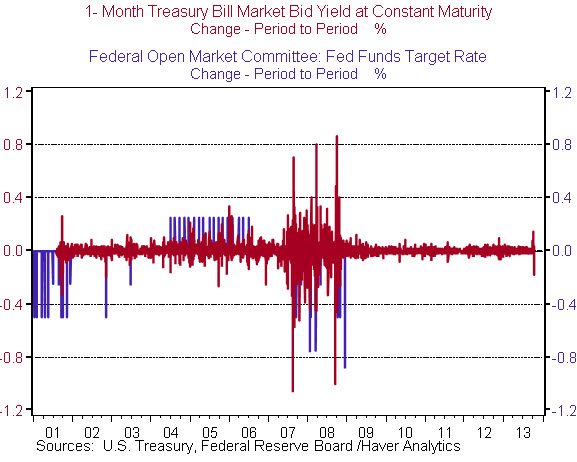 Washington woke up to a potential crisis and as news reports surfaced that Congress was working on a deal, short-term interest rates started to fall (Figure 2). Rates declined throughout the day as the deal solidified. With the debt ceiling now raised – at least temporarily – and the government back at work, short-term interest rates have settled back to where they have been for the last five years (Figure 4).

Unless Congress can’t come to an agreement on the debt ceiling suspension after February 7th, short-term interest rates are likely to stay at those ultra-low levels until the Fed starts raising rates. 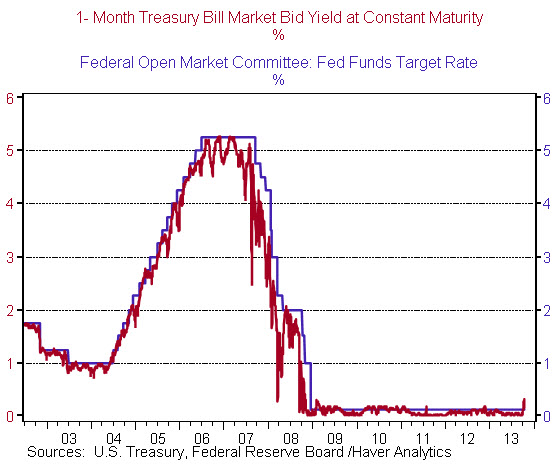 Political uncertainty has always been a regular part of the financial landscape. Historically, last minute debt limit deals have not led to a loss of confidence in Treasuries, though Standard & Poor’s did downgrade the U.S. in August 2011 for that very reason. S&P has stated that the current political environment is consistent with their AA+ rating. Moody’s remains unfazed, with the U.S. at top-notch Aaa. Meanwhile, Fitch, which also rates the U.S. at AAA, put the Treasuries on negative watch on Tuesday as a result of the continued brinkmanship. For now, U.S. Treasuries retain their safe haven status. We’ll stay tuned and hope we don’t have to watch a re-run of this show again early next year when the temporary extension of the debt limit expires.