Few issues are more critical than putting Americans back to work. With the economy adding private-sector jobs for the last 30 consecutive months and the unemployment rate continuing to tick down, another concern has begun to dominate the discussion. Is it enough to find a job, or should we be more focused on the quality of that job? For those Americans who have been displaced in the workforce, what are their prospects of finding comparable employment in the 21st century, post-recession economy? After all, having a job—any job—does not guarantee a wage that will support a family. How, then, can we foster an economy that produces quality, high-paying jobs?


There may be a range of perspectives on the best way to move our economy forward, but one element essential to any answer is education. It may seem intuitive that more educated people earn more, yet the extent to which this is true is striking. A picture is often worth a thousand words, and the graph below illustrates this point. 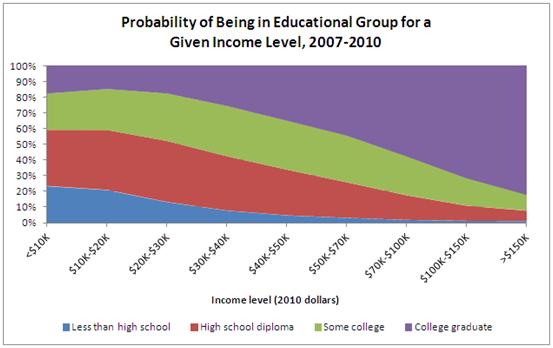 The horizontal axis measures income while the vertical axis breaks up the income level by education level. As we move to the right toward higher incomes, we see that college graduates make up a bigger and bigger chunk of those earners. A few numbers help to underscore this. Those with only a high school diploma accounted for 39 percent of those who made between $20,000 and $30,000, but just 8 percent of those earning more than $100,000. In contrast, college graduates only accounted for 18 percent of the $20,000-to-$30,000 group and 75 percent of people earning more than $100,000, despite the population of these two educational demographic groups being roughly equal.

The message is clear—more education opens the gateway to better, higher-paying jobs. To put this into perspective, consider this:

On September 27th, The Hamilton Project will host an event focusing on the value of education, and opportunities to promote attainment and achievement in our K-12 system. We will release a series of economic facts about K-12 education in addition to three new discussion papers by outside authors— “Staying in School: A Proposal to Raise High School Graduation Rates,” “Learning from the Successes and Failures of Charter Schools,” and “Harnessing Technology to Improve K-12 Education.” Focusing on the new papers, three panels of distinguished experts will explore the value of stricter and better-enforced attendance laws, in coordination with other programs, to increase the high school graduation rate; the use of new evidence to demonstrate how targeted charter school methods could be successfully applied in public schools; and a new approach to evaluating education technologies to help speed the development of valuable new products.

The new Hamilton Project papers will be available on September 27th at 9:00 AM ET. For more information or to register for the event, click here.