More than two years after the Great Recession was pronounced dead, there is scant evidence of renewed demographic dynamism in areas that once drove the nation’s growth. This is especially the case in the nation’s “exurbs”—traditional destinations for new homebuyers at the outer edge of the metropolitan frontier. But it is also the case for what were the fastest growing metropolitan areas, whose demographic pulse stopped beating when the housing market crashed and the recession took hold.

These findings emerge from the Census Bureau’s first release of annual sub-national population estimates since the 2010 Census, which permit a longer look at population shifts since the onset of recession. They indicate that, through July 2011, the late 2000s demographic malaise continued. It raises the prospect that we may be reaching a “new normal” about where people decide to locate.

The most pronounced revelation concerns the outer suburbs of metropolitan areas—residential zones that have historically exhibited rapid growth, especially in the mid-2000s. Based on a Brookings classification scheme, Figure 1 indicates that the least dense, outer suburban counties—exurbs and emerging suburbs—registered extremely low growth rates in 2010-2011, continuing a downward trajectory established in the late 2000s. 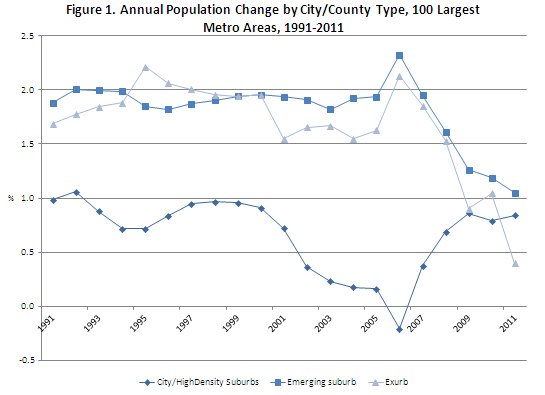 Exurban growth reached such depths in 2010-2011 that growth in cities and dense, mostly inner suburbs eclipsed it. This is a decided flip from mid-decade, when the latter areas bled migrants to the fast developing urban fringe. It reflects the difficult economic straits now facing would-be home-buyers, many in their twenties and early thirties, who tend to be stuck in place in inner suburbs and cities. It also reflects uncertainty about the future of the housing market and broader economy in far-flung metropolitan locations amid rising fuel prices.

The outer-suburban slowdown is widespread, reflecting pre-recession overbuilding, and current lack of demand in most parts of the country. Each of the 100 fastest growing outer suburban counties during the 2003-2007 boom period grew more slowly in the four years since, and the majority grew more slowly last year than in each of the previous three years.

While not as dramatic as the recent exurban fall, former metropolitan hotspots for growth show few signs of population revival two years post-recession. Las Vegas, Phoenix, and Orlando are prime examples of metro areas whose growth swooned toward the end of the decade as their construction and housing “bubble” sectors crashed (Figure 2). Of the 50 fastest growing large metropolitan areas from 2003 to 2007, 43 grew more slowly in the subsequent four-year period with nearly half registering lower growth in 2010-1 than in each of the three previous years. More diversified metro economies in the Sunbelt such as Austin, Provo, and Raleigh saw slight growth drop-offs, but sustained enough growth to rank first through third from 2007 to 2011. 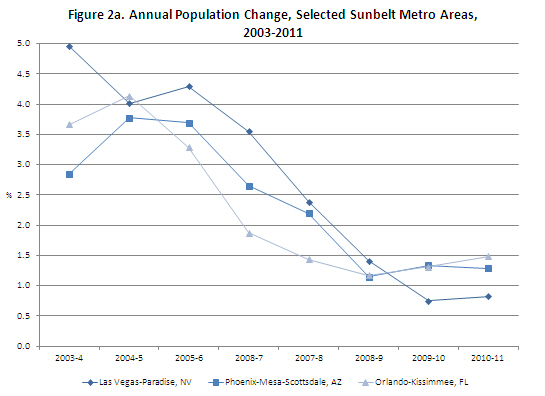 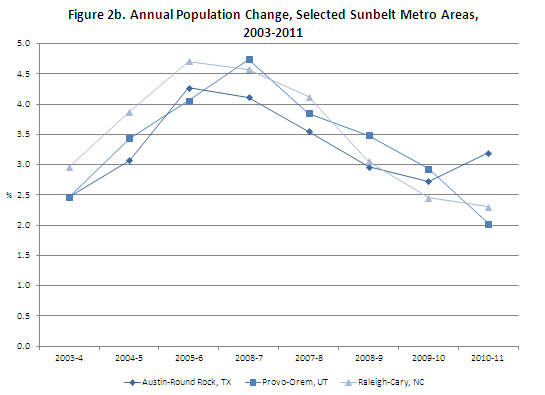 The silver lining in the new numbers for former growth magnets is evidence of a mini-turnaround in Florida. From 2010 to 2011, Miami, Orlando, and Tampa all gained population from domestic in-migration. Perhaps this positive view for Florida is an omen for other boom areas, although the trend has not yet shown up strongly elsewhere.

The geography of growth in the early 2000s tended to accentuate familiar postwar population shifts to the suburbs, exurbs, and new Sunbelt frontiers. The housing market crash and Great Recession put the brakes on all that. Now other factors are coming into play, including the rising costs of energy and new levels of fiscal austerity for state and local governments. The fact that outer suburban growth has continued to falter two years after the recession ended calls into question whether today’s younger generations will hold the same residential preferences as their forebears. It is possible that the new financial risks they face, along with increased environmental and economic concerns, will change perceptions of where to find their version of the American Dream.