Arizona’s new immigration law raises many questions. Perhaps most fundamental, as the hue and cry continues, is this: Is Arizona out of touch with the rest of America? Or, is it the precursor of things to come elsewhere? To the extent that racial and ethnic conflict underpins these developments in the Grand Canyon State, there is reason to be wary.

Demographically, there is no doubt Latinos and other immigrant minorities are America’s future, and on this, Arizona stands on the front lines. Over the past two decades the state has seen its Latino population grow by 180 percent as its racial composition shifted from 72 to 58 percent white.

Yet there is an important demographic nuance to this growth—providing context to the white backlash in Arizona in ways that could play out else where. It is the fact that the state’s swift Hispanic growth has been concentrated in young adults and children, creating a “cultural generation gap” with largely white baby boomers and older populations, the same demographic that predominates in the recent Tea Party protests. A shorthand measure for this cultural generation gap in a state is the disparity between children and seniors in their white population shares. Arizona leads the nation on this gap at 40 (where 43 percent of its child population is white compared with 83 percent for seniors). But the states of Nevada, California, Texas, New Mexico, and Florida are not that far behind. (See Table 1).

Nationally this gap is 25 percentage points. 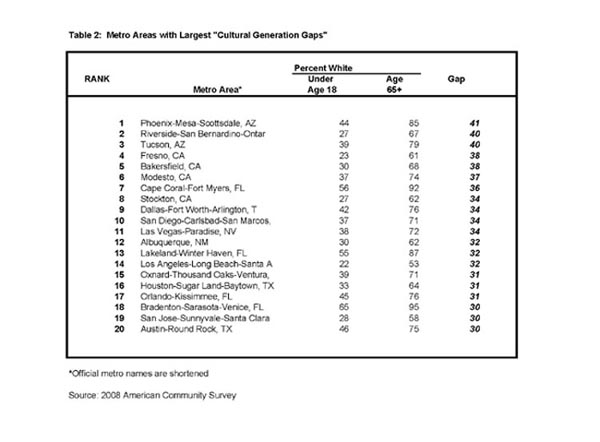 The appeal of anti-immigrant, anti-Latino messages among boomers and seniors may seem surprising especially because the former are so closely associated with 1960s era liberalism and Civil Rights. Yet this stereotype hardly applies to all boomers and recent presidential elections have shown them to be either politically split or, in the case of white boomer men, veering toward the right. Moreover, boomers grew up in a more insular America than did their parents or their children. Between 1946 and 1964, the years of the boom, the immigrant share of the nation’s population shrunk to an all-time low (under 5 percent) and those who did arrive were largely whites from Europe. Most boomers grew up and lived much of their lives in predominantly white suburbs, residentially isolated from minorities.

So in areas where large numbers of new young adults and children are culturally distinct from an older population which does not share familial or personal connections, there is a noticeable gap that involves more than just age. A 2006 Pew survey indicated that more than half the population over age 50 believed that immigrants were a burden because they take housing, jobs and healthcare. And this was well before the Great Recession, the foreclosure crisis, and freefalls in 401k retirement accounts.

Of course, the circumstances that precipitated recent events in Arizona are determined by more than just demography. The state’s border with Mexico has become ground zero for illegal crossings. Recent violent and drug-related incidents have generated fear that has done much to fan the new anti-Latino, anti-immigrant sentiment in the state. Yet, the demographic stages for impending cultural generation gaps, now evident in Arizona, are being set in place in other parts of the country.

While the outcomes in those places may not be as severe in the form of angry public reactions or the passing of punitive laws, the seeds of new racial and ethnic competition for public resources have been planted as a result of decade long race-ethnic shifts. The tracking of these changes should aid federal, state, and local leaders in planning for ways to prepare their citizens, at all ages, to accept positive, shared measures and avoid repeating the situation we are witnessing in Arizona.

US immigration policy: A classic, unappreciated example of structural racism