Last week, we showed how the share of the nation’s venture capital going to the Bay Area has actually increased over the last decade and posed the question: Are San Francisco and Silicon Valley good models for most cities to imitate? And with the answer being “no,” what strategies should cities employ to bolster local capital networks?

The answer depends upon regions’ technical strengths—different technologies imply different venture capital strategies. A common assumption is that most cities look like Silicon Valley with software monopolizing venture funding, but in many places a mix of different technologies are far more important. Metropolitan level venture capital data from 2005 to 2015 from Pitchbook illustrates how different cities require different strategies.

Pittsburgh, on the other hand, has a far more mixed portfolio than either Cleveland or the Bay Area, one of the most diverse in the country. Pittsburgh’s top 10 technologies funded over the last decade include laboratory services, energy exploration, battery storage, medical devices, software, and electronic equipment—with none making up more than one-fifth the metro area’s portfolio. Pittsburgh’s mix of educational and non-profit institutions like Carnegie Mellon University, University of Pittsburgh and UPMC support research in engineering, software, medical technologies, and therapeutics. In addition private companies like Google, Alcoa, and the shale gas boom have provided the region with a blend of market opportunities that are extremely different than that of the Bay Area. 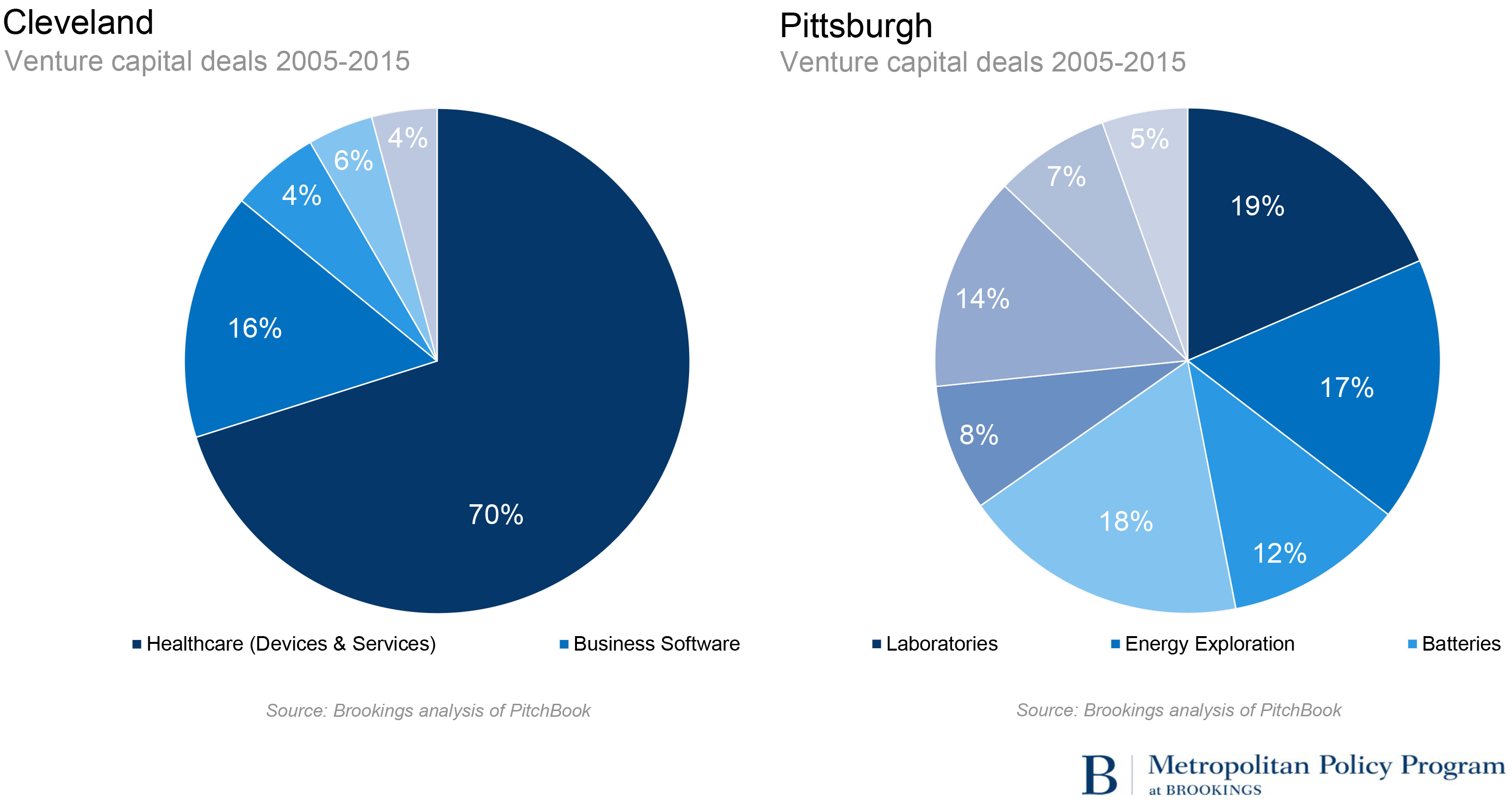 Equally important to the type of technologies funded is how venture capital deals are funded. In the Bay Area private venture capital firms represent the vast majority of funding both in terms of numbers of deals and overall value. Deals from accelerators and universities together equal less than one-tenth of what is invested by private venture capital firms. Given the many private investment firms in the Bay Area, universities and accelerators are better at creating and incubating technologies instead of funding them. Unfortunately, other markets lack such private sector assets and try to jumpstart investments through other methods.

Over the last decade, Pittsburgh made just 3 percent as many total venture deals as the Bay Area, but breaking that figure down by the funding source, universities outperformed in Pittsburgh. There they funded nearly 30 percent as many deals as universities did in San Francisco and Silicon Valley, a rate 10 times as high as would be expected based the Bay Area “norm.” One reason for this is Pittsburgh is relatively new to venture funding and may have more research assets than private venture capital firms. Therefore, university funds could fill an important capital gap.

A common worry is these non-private sector deals are poor investments that private firms, with superior market intelligence, simply refused to make. This argument is most persuasive in regions like the Bay Area where there is no shortage of private capital to fund good ideas. However in other regions these investments can prove to be smart precursors to private funding. Also, rarely do public institutions make investment decisions. Instead, public dollars are funneled through private investment firms to kick start regional activity. For example, Philadelphia’s new StartUp PHL fund is paid for by taxpayer dollars but investment decisions are made by First Capital, the city’s largest private venture capital fund. The fund requires recipients to stay in the city for at least six months after funding, with the hope to increase the number of growing technology companies in Philadelphia.

Cleveland and Pittsburgh are specific examples of a general point. Cities have unique technology competencies and pathways to venture capital. Economic strategies to attract outside, and bolster local capital, should reflect those attributes and not simply default to what seems to have worked in the Bay Area.