Racial segregation is still high in many parts of America, lying at the root of sharp inequalities that continue to be visible in many cities. But an examination of newly released Census data suggests a modest decline in black-white segregation across most large U.S. metropolitan areas. It also shows that neighborhoods in which blacks reside are becoming somewhat less black due to recent population shifts of blacks and the growth and dispersion of Hispanics and other minorities. These trends hardly signal the end of segregation in the United States, but they do suggest opportunities to achieve greater residential integration as race migration trends are in flux.

The new statistics, drawn from the Census Bureau’s 2010-2014 American Community Survey allow calculation of neighborhood racial attributes and segregation measures. A standard measure of segregation indicates the percentage of blacks that would have to change neighborhoods to match the distribution of whites. It ranges from zero (complete integration) to 100 (complete segregation). When applied to the nation’s 52 largest metropolitan areas with at least 20,000 black residents most show segregation levels between 50 and 70 (see Map). While far below the nearly apartheid racial separation that existed for much of the nation’s history, these are still high measures—more than half of blacks would need to move to achieve complete integration. 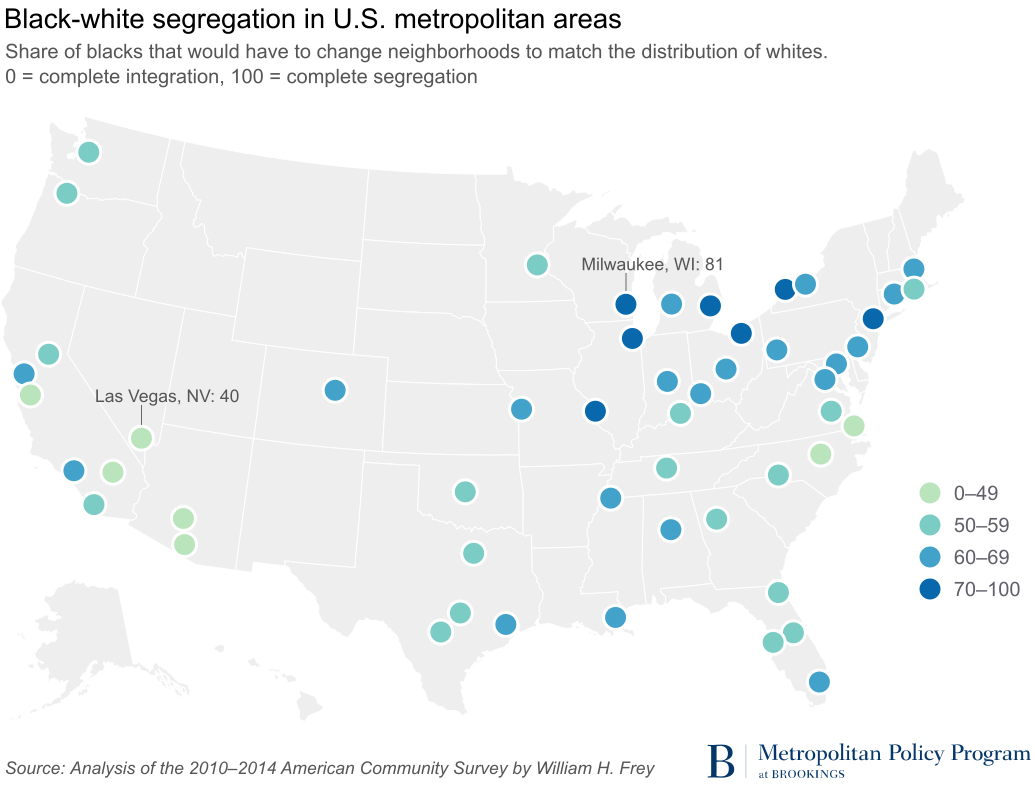 Yet there is great variation across metropolitan areas as some of the fastest growing places in the South, such as Atlanta, Dallas and Austin show levels below 60. Las Vegas registers the lowest level at just 40. On the other hand, many of the nation’s large metropolitan areas outside the South, especially in the slow growing industrial Midwest and Northeast, have levels above 70, led by Milwaukee at 81 and followed by New York, Chicago, Detroit, Cleveland, and Buffalo (Download Excel table). These areas served as primary destinations of the “Great Migration” out of the South for much of the last century, but as their economies declined, and blacks began returning to the South their old pre-civil rights segregation patterns tended to persist among the mostly urban African American populations left behind.

But the positive news, shown with the new data, is that several of these high segregation areas have shown declines since 2000 (link to Table 1). Many of these experienced a renewed black suburbanization which led residents of heavily black city neighborhoods to somewhat more integrated neighborhoods in the suburbs. Between 2000 and 2010–14, black-white segregation levels declined in 45 of the 52 metropolitan areas; with several of the bigger declines registered by older Midwest regions.

Detroit’s and Kansas City’s segregation levels declined by 11 percentage points and those of Chicago, Buffalo, Cincinnati, and Indianapolis fell by at 5 points or more. This is significant because these older Northern areas were slower to desegregate than Southern areas where segregation declines occurred in earlier decades, as their fast growing black and white populations expanded into newer somewhat more integrated communities. Still the new data also show pervasive segregation declines in the South—with Atlanta, Orlando, Tampa, and Louisville showing segregation declines of 5 or more points since 2000.

Another way to see the impact of these shifts is to examine changes in the racial compositions of neighborhoods where blacks live. The new numbers show that for all but five large metropolitan areas, the average black resident lives in a less black neighborhood in 2010-2014 than in 2000 (Download Excel table).

Shown in Figure 1 are changes in the neighborhoods where blacks resided for Chicago, New York, and Houston. In 2000, the average Chicago black resident lived in a neighborhood that was 72 percent black, 17 percent white, 8 percent Hispanic and the rest other races. By 2010—2014, the black share was reduced to just 64 percent as the white share increased to 19 percent and the Hispanic share rose to 12.5 percent. Over this period some blacks moved to more diverse neighborhoods in both cities and suburbs, and Hispanics moved into many previously predominantly black neighborhoods.

In New York and Houston blacks also lived in neighborhoods that were “less black” in 2010-2014 than in 2010 as Hispanics and, to a lesser degree, Asians comprised larger shares in their neighborhoods. Both metropolitan areas are magnets for Hispanics and Asians, and each has exhibited a rise in black suburbanization over this period.

Although areas of black residence became less black in most metropolitan areas, other places with especially large shifts included Detroit, Kansas City, San Francisco, Indianapolis, Louisville, and Cleveland. While some of this change (especially in San Francisco) might be attributed to gentrification and displacement, there are also the broader patterns of black suburbanization, and the growth and dispersion of Hispanics and Asians into neighborhoods where blacks reside.

Despite continued high levels, declines in black segregation suggest that broader demographic forces at work on the part of new generations of blacks, whites, and other growing minorities hold the potential, if partnered with appropriate social and economic actions, to mitigate the pronounced levels of segregation that characterized the country for much of its history.