In January 2011, the United States was still in the grips of the Great Recession. The unemployment rate sat at a stubborn 9 percent, slightly lower than the high of 10 percent in October 2009. Job losses were staggering. The Chicago and Phoenix metro areas shed 330,000 and 240,000 jobs, respectively, from their pre-recession peak to their post-recession troughs in 2010. Even mid-sized Portland, Ore. had lost 80,000 jobs by late 2009.

Amid this urgency, we made a big bet, launching the Brookings-Rockefeller Project on State and Metropolitan Innovation (PSMI) in early 2011. The vision was to accelerate the U.S. transition into the next economy by helping cities and metro areas emerge from the recession with more jobs and better jobs but also with economies that were more opportunity-rich and globally competitive. The interest was swift. Governors and mayors—some newly elected—were eager to launch job strategies. Regional chambers of commerce and economic development organizations were scrambling to update old economic plans to reflect post-recession realities. Over nearly five years, PSMI has engaged 29 metropolitan areas and states in reorienting their strategies and investments toward innovation, entrepreneurship, trade, skills development, and other drivers of long-term sustainable growth. 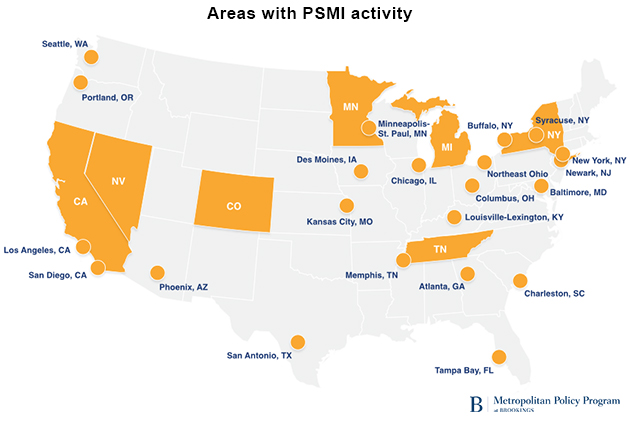 This month, we published a new report commissioned from Regional Growth Strategies that gives us a window into how well that experiment has worked, drawing from a sample of the sites most intensely involved in PSMI, and what we and our partners have learned about the challenges of transforming regional and state economies.

The findings are both promising and sobering.

To be clear, we knew the goal was ambitious. No region or state could overhaul their market fundamentals or effectively tackle the big structural changes in the economy overnight. Plus, the promise of better jobs, expanding household incomes, and steadily improving living standards would take time to gain traction and yield results.

But a tangible shift is underway. Public and private sector leaders in cities and states are adopting a new generation of economic development strategies that reflect the needs of the future economy, while staying true to unique local assets and the potential of local workers. The state of Nevada and the Phoenix metro area, two places long synonymous with growth driven by tourism and housing construction, are undertaking comprehensive strategies around industry clusters, new technologies, and the development of a STEM workforce to diversify and strengthen their economy for the long-run. Syracuse/Central Upstate New York launched a global trade strategy, an expanded effort to train lower-skilled workers for better jobs, and an innovation initiative focused on the emergence of a new cross-sector technology cluster around data and remote sensing technology. Portland and San Diego spearheaded regional export strategies that deepen their specializations in green-building, life sciences, and other industries, attracting customers and venture capital from across the world. Memphis, which has long struggled with educational and racial disparities, is launching an ambitious workforce intermediary that is connecting the K-12 public education system, community colleges, and key industry partners to expand opportunities for firms and workers. And New York state created a national model for state economic development anchored in regional strategies by introducing a competition designed to incentivize and support strategic regional action.

The report also describes other civic innovations—the invention of new strategies, such as in exports and trade; the consensus toward systemic change with a “portfolio of mutually reinforcing initiatives” versus isolated rifle-shot solutions; and new multi-jurisdictional partnerships that are replacing wasteful intraregional rivalries. These exciting efforts are being rewarded with the rise of stronger backbone organizations and new intermediaries to support implementation.

But the report is also rather blunt about the challenges facing local and state leaders that could hamper further progress. These include the complexity of managing long-term collective impact when local players change and new priorities emerge. Leaders are also struggling to secure long-term funding to sustain and scale their efforts and deliver bigger results. Meanwhile, these transformative strategies operate even as incentive-driven economic development still abounds. “Business attraction is so hard-wired,” as one local leader observed, that traditional short-term approaches still dwarf the difficult efforts of this new tack.

The report’s author, Pete Carlson, will expand on the report’s lessons in a series of blogs over the next several months. Findings from the project will also be explored in more detail in a summative evaluation of the entire PSMI that will be completed later this year. We publish these findings and lessons in hopes that it informs and encourages the evolution underway in the field toward a more sustainable, resilient economy.

For Brookings, as we reflect on these lessons, we intend for this experiment to give way to a change in our business model. We intend to make it our objective to provide data, research, and a platform for state and metro leaders to continue to learn and succeed from national experts and, even more importantly, from one another.  We will continue to partner with forward-looking regions and institutions to tackle the persistent challenge of greater opportunity for all.