Earlier this week, the Washington Post reported that D.C. city officials have cleared the way for a voter initiative in November 2016 to raise the city’s hourly minimum wage to $15. The proposal is already pitting labor unions and other progressive groups who back the rise against restaurant owners and the D.C. Chamber of Commerce, who warn that the hike would force job cuts and business closings.

If D.C. moves to $15, it would join a growing list of big cities that have recently raised their minimum wages by significant amounts, including Seattle, San Francisco, Los Angeles, and Chicago. On Wednesday, a New York State commission endorsed a proposal for a $15/hour minimum wage for fast-food restaurant workers. The new D.C. proposal actually comes on the heels of a minimum wage hike the city adopted in late 2013, from $8.25 to $11.50.

We can’t know for sure what effects the proposed hike would have on employment. Economists are divided on the question, though the preponderance of evidence points to small effects on jobs from previous increases. We don’t yet have evidence on whether recent significant city-level increases have impacted job availability. Any such costs, of course, need to be weighed against the benefits of higher earnings for minimum-wage workers.

What we do know, however, is that D.C. is in perhaps a better position to absorb this wage hike without significant negative effects than any other jurisdiction in the country.

That’s because wages in D.C. are among the highest nationwide. According to the U.S. Bureau of Labor Statistics, in May 2014 the median D.C. job paid $31.20/hour. That was about $10/hour more than in the next-highest state, Alaska. 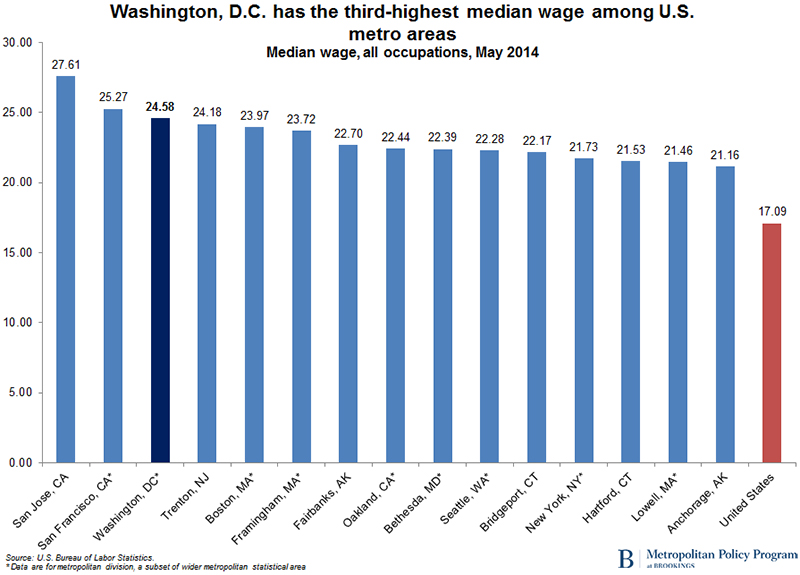 Of course, D.C. is not a state (for instance, we lack voting representation in Congress), it’s a big city in a big metropolitan area. And while we don’t have city-level wage data, we do know that among the nation’s more than 370 metropolitan areas, the D.C. region (which includes northern Virginia, southern Maryland, and even part of West Virginia) ranked third overall for median wages at $24.58/hour. Only San Jose and San Francisco in the Bay Area ranked higher.

Moreover, the $15 per hour proposal aligns well with a benchmark proposed by University of Massachusetts-Amherst economist Arindrajit Dube—in a paper for Brookings’ Hamilton Project—that state and local governments gauge their minimum wage to half the local-area median wage. He notes that this is the norm in OECD countries that have a statutory minimum wage, and approximates the value of the federal minimum wage through the 1960s and 1970s. That benchmark would recommend a D.C. minimum wage for 2014 of between $12.29/hour (using the regional median wage) and $15.60/hour (using the city’s median wage). Continuing growth in the city economy suggests that by the time the proposal would come into effect, $15/hour would be an even more reasonable level.

One drawback is that by moving to $15/hour, D.C. would pull away from its Maryland neighbors in Montgomery and Prince George’s counties, who hiked their minimum wages to $11.50/hour along with the District in 2014. Such regional coordination, which can mitigate “border wars” among jurisdictions for lower-wage jobs, remains rare. Advocates likely hope that D.C.’s high-wage, high-cost suburbs will eventually follow its lead.

The push for $15 per hour in D.C. and elsewhere hasn’t been based on complex statistical analysis. It started with a series of strikes by fast-food workers in 2012, who rallied around $15 as an audacious goal, but one that was round and easy to remember.

At least in D.C.’s case, however, $15/hour might hit the mark economically—and help tens of thousands of low-wage workers in the process.