This week the National Governors Association is hosting a policy institute for governors’ economic policy advisors in Pittsburgh, and the agenda will focus on economic growth: how to get it and how to expand it.

One topic we hope will gain new currency at the meeting is the cultivation of advanced industries—high-value export industries characterized by high-levels of research and development and a heavy reliance on workers with science, technology, engineering, and math (STEM) skills.

The 50 industries in this sector, the importance of which we described in new research released earlier this year, represent the chief anchor of America’s economy. Industries like automotive in Michigan, energy in Texas, and high-tech services in California generate 60 percent of U.S. exports and directly or indirectly support more than one-quarter of U.S. jobs. The success of the nation’s advanced industries is a prerequisite for future broadly shared prosperity in the United States.

And yet, advanced industries, though ubiquitous, are not evenly distributed across the states.

Not surprisingly, California, Texas, and New York—the first, second, and fourth most-populated states—contained the largest number of advanced industry jobs in 2013, followed by Illinois and Michigan. These five states encompassed 35 percent of all advanced industry direct employment in the U.S., with both California and Texas containing more than 1 million jobs each. By contrast, small-population states like Alaska, Hawaii, Montana, and Wyoming possess less than 25,000 advanced sector jobs.

The patterns aren’t so predictable when it comes to share of jobs in advanced industries. Michigan leads the list, with 11.8 percent of jobs in the sector, and six other states—California, Indiana, Massachusetts, Utah, Virginia, and Washington—topped 10 percent. All of these states are well positioned to go from strength to strength in the next phase of economic change. At the other end of the spectrum, advanced industries accounted for fewer than 6 percent of jobs in nine states, with the lowest shares occurring in Hawaii, Maine, Montana, and Nevada. These states could struggle to secure prosperity in the coming decade. 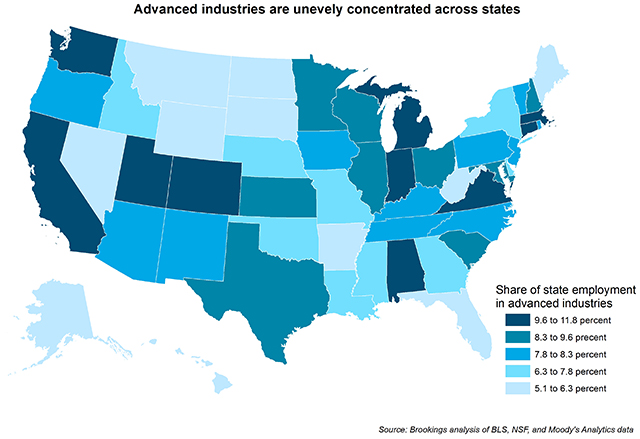 And there are other sorts of interstate variations that the economic policy advisors should consider as well. Advanced industry strength is all about strong regional industry clusters, and so there are many ways that states and their regions participate by accumulating strong local specializations.

For example, Indiana derives 76 percent of its advanced industry employment from advanced manufacturing, in industries ranging from motor vehicles to pharmaceuticals, while Massachusetts, Maryland, and New Jersey each derives more than 64 percent of its advanced industry employment from services like computer systems design, R&D, software products, and engineering. By contrast, employment in Alabama, Michigan, and Texas is less concentrated in a few industries. Texas’ advanced industry employment is distributed relatively evenly across manufacturing industries like semiconductors and chemicals; energy segments like oil and gas extraction; and high-tech services like engineering, computer design, and management consulting. Such diversification bodes well for those states as it promises both stability and synergies.

In any event, the state map of advanced industry concentration is variegated and diverse. Where it is dense, it promises states a toehold in the decade’s technology-enabled global economy—and should be promoted. Where it is thin, it warns of drift and the need for action.

To learn more about the advanced industry sector in each U.S. state, visit our interactive feature.