One possible objection to our claim at the Metro Program that “advanced industries”— those that invest heavily in research and development (R&D) and science, technology, education, and math (STEM) workers—are a prerequisite for broad-based local and national prosperity derives from these industries’ extraordinary productivity. After all, industries characterized by outsized output per worker do not necessarily have to add jobs in order to grow.

Indeed, since 1980 advanced industries’ aggregate output has expanded at better than 5 percent a year even as the sector’s overall employment has remained mostly flat. So it’s reasonable to ask: Do three decades of first offshoring and then automation (incorporating artificial intelligence, robotics, and 3-D printing) now preclude significant job creation from these industries?

Certainly technology and growth scholars Erik Brynjolfsson, Andrew McAfee, and Michael Spence raise serious concerns (registration required). And for sure soaring output in advanced industries supported almost no aggregate job growth during the years 1980 to 2010. For that reason the sector stands in many respects as the leading counter to the conventional wisdom that technological progress always creates more jobs than it destroys.

And yet, for all that, it’s worth noting that at least in the recent post-crisis period the advanced industry sector began to grow. In fact, it is not stretching things to say that the sector led the post-recession jobs recovery in the United States, both nationally and in many regions.

At the national level, the 50-industry, R&D- and STEM-worker-intensive sector added almost 1 million jobs in the years 2010–2013, or nearly 18 percent of the nation’s total job growth. That’s not bad for a sector that represents little more than 8 percent of the nation’s job base. Over those years employment in the sector grew by 2.7 percent per year on average, nearly twice as fast as in the rest of the economy.

Breaking this down, the accompanying chart and table show that, while not all advanced industries contributed to the post-crisis jobs recovery, many did—and substantially. Computer systems design, at 256,600 jobs, and management, scientific, and technical consulting services, at 176,700, were the leading advanced industries in terms of job growth, while motor vehicle parts manufacturing added 93,600 jobs and oil and gas extraction added 38,800. These figures don’t compare to those of the top job-creating industries overall—restaurants (878,400 jobs) and temporary employment services (572,700)—but they certainly comprise the bulk of the high-quality employment that the nation has recovered since the crisis. 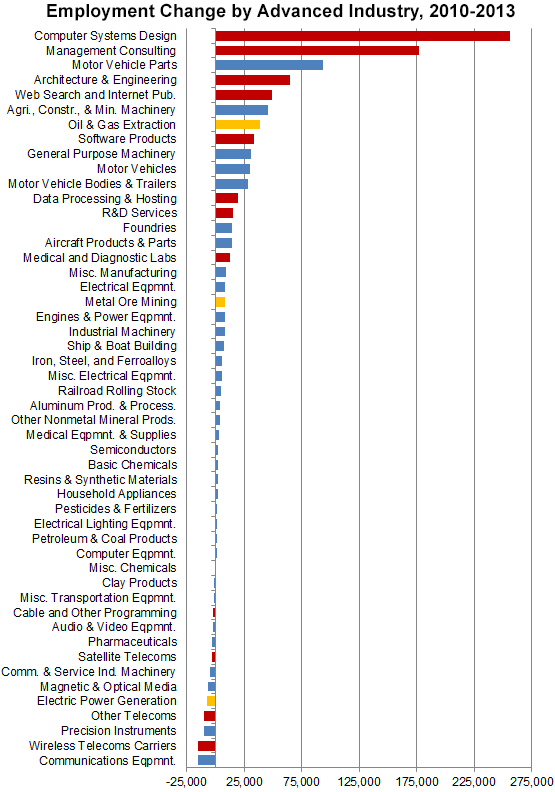 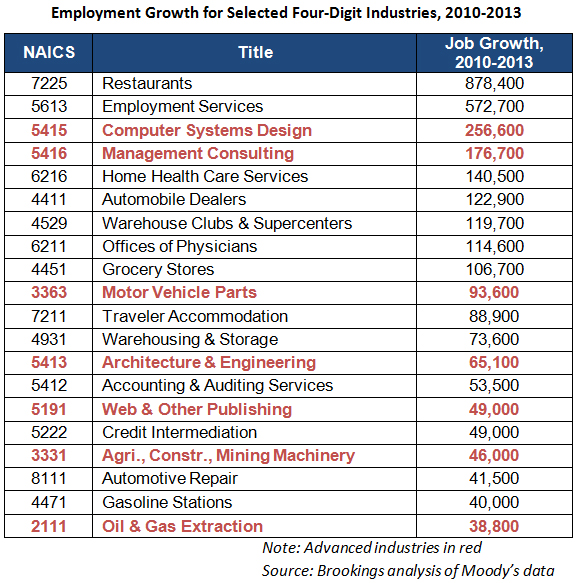 So, where does all this leave us? Should the nation and its regions stake their future on the advanced industries sector for future prosperity, including job growth? In terms of overall prosperity (as one of us wrote recently), the answer is an unequivocal yes:  Quite simply, there will be no future prosperity nationally or regionally without the innovations, productivity, and output generated by the sector. As to the more specific question of job creation, greater caution is required. As Brynjolfsson and McAfee have written in their book, The Second Machine Age, one needn’t be a Luddite to worry that the advanced sector’s accelerating deployment of technology will limit future job creation in the sector. In fact, the next waves of advanced industry technology could be net job destroyers. But for now, that has not been the case. Since the Great Recession many if not all U.S. advanced industries have begun again to provide hundreds of thousands of direct jobs, as well as even more indirect ones. These industries’ contributions post-recession have revealed them to be an important part of the economy’s jobs-growth strategy.