Driving to work has been a staple in the American commute for decades, but it appears the country’s love affair with cars is stalling in many places. After years of sustained growth, driving levels are flat-lining, while more young people are opting for alternative transportation modes.

Newly released Census data from the 2013 American Community Survey offers additional insight into the shifting nature of our daily commutes.

To be sure, the car is still king for the United States as a whole. Based on the new Census estimates, over 85 percent of all workers still get to their jobs by private automobile. That amounts to over 122 million commuters, the vast majority of whom travel alone rather than in a carpool. It’s also relatively consistent with our commuting patterns from 1980, when nearly the same percentage of workers commuted by car.

But those long-term trends mask real changes over the past few years. The share of national commuters traveling by private vehicle is edging down for the first time in decades—from 86.5 percent in 2007 to 85.8 percent in 2013. Meanwhile, other transportation modes have grown in relative importance. Public transportation, which just recorded the most passenger trips since 1956, saw its share jump to over 5 percent, reaching levels not seen since 1990. The share of those bicycling and walking to work also continued to rise, now representing nearly 4 percent of all commuters. The biggest gain, however, came from those workers who didn’t technically commute at all. With the help of burgeoning broadband coverage, nearly as many people now work from home as ride public transportation to their jobs.

Leading these national trends are the nation’s largest metropolitan areas.* Over two-thirds of these places experienced driving declines between 2007 and 2013, while also simultaneously seeing a rise in commuters walking, bicycling or working at home. 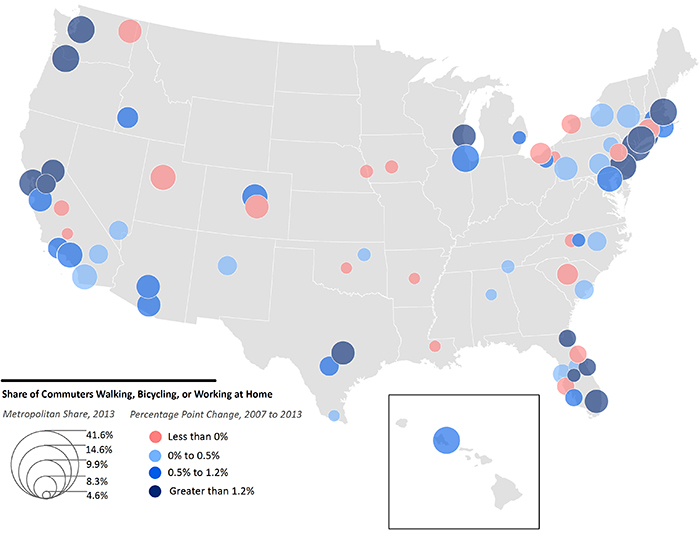 From Los Angeles and Seattle to Boston and Miami, this shift in commuting patterns is taking place all across the country, even in traditionally car-centric locations. Large metros like New York and San Francisco grew their transit shares, but so did Tucson and Albany. Similar shares of people now bike or walk to work in Columbia, SC, as they do in Portland, OR.

Over time, these evolving commuting habits will help influence—and be shaped by—the built environment of our communities. The proliferation of pedestrian-scaled developments, for instance, represents one way in which many metropolitan areas are stitching together their urban fabric and responding to a new geography of innovation. As more individuals work from home, stroll to their office, or even engage in widespread bike sharing and car sharing, metropolitan areas will need to consider a range of plans and policies that further address these multimodal needs.

*: Due to changing metropolitan definitions and limited county-level data, we can only compare 69 of the 100 largest metropolitan areas between 2007 and 2013. For a more thorough technical explanation, see Elizabeth Kneebone and Natalie Holmes’ report on the same data issues.