As the U.S. Senate prepares to vote on updating antitrust statutes to deal with new digital era abuses, the airwaves have been filled with emotional but fact-free advertising blasting any action. The Wall Street Journal headlined, “Big Tech Has Spent $36 Million on Ads to Torpedo Antitrust Bill,” and Politico reports the senate Majority Leader will not bring the legislation to the floor without 60 votes and that vulnerable Democrats may be backing off their support.

To amass great fortunes through market exploitation, and then use part of those riches to pay for propaganda opposing regulation, is a timeless political strategy. In The Bully Pulpit, Doris Kearns Goodwin described its 19th-century implementation: “Troubled by the passage of the regulatory bill in the House, the railroads launched a sweeping propaganda campaign to turn the country against regulation.”[1]

Commenting on the industry campaign, the Fairhope Courier of Des Moines, Iowa—whose readers were farmers abused by the railroads’ practices—editorialized, “It is a little startling to read how the railroad combines first to rob the country of millions, and then to use a portion of this fund stolen from the people to corrupt the sources of information and thus try to perpetuate their robbery through a blinded public opinion.”[2]

Playing off the ignorance of the public (and Congress) about the details of its business, the railroads warned disaster would be the result of any government intrusion. Government oversight “would mean a general unsettling of affairs” within the industry and the wider public, they argued.[3]

History is repeating itself today.

“A multimillion-dollar campaign is pushing Dems to ditch antitrust reform,” The Washington Post headlined. Of the $36 million spent to date, The Wall Street Journal reports the Computer & Communications Industry Association (CCIA) has spent the most—over $24 million. The CCIA commercials reportedly focused on the swing states of Arizona, Georgia, Nevada, Wisconsin, and New Hampshire. CCIA represents companies such as Amazon, Apple, Meta/Facebook, and Alphabet/Google.

“Don’t Break What Works” is the theme of the CCIA advertisements. “Congress has plans that could stop progress in its tracks, breaking the products and services you love,” the commercial warns. The campaign targets S. 2992, the bipartisan American Innovation and Choice Act that would empower the government to challenge self-preferencing practices of the online platforms if they are determined to be anticompetitive.

Amazon, which is often mentioned as engaging in self-preferencing, is the focus of another CCIA advertisement. If enacted, the legislation “could break Amazon’s guaranteed two-day delivery,” the commercial warns. However, as my colleague Bill Baer has pointed out, the legislation is far more nuanced than what the commercials suggest. The bill doesn’t reach conclusions about companies but would instead require antitrust authorities to make their case in court where the companies would have the full opportunity to challenge the contention that certain practices are anticompetitive.

Another industry group, the Consumer Technology Association (CTA), has also been running advertisements. The CTA angle of attack is that antitrust legislation is a national security threat. Referencing the Russian attack on Ukraine and “cyber warfare against the U.S.,” the ad rhetorically asks, “Why is Congress considering legislation that makes us less safe?” Unlike the CCIA ads, these commercials reference no specific piece of legislation. Adopting the common “don’t break” tag line, however, the ad concludes, “Don’t break American technology when we need it most.”

Which Side Are You On?

Another advertising campaign is being run by a heretofore unknown organization named American Edge Project. These commercials also fail to mention what legislation concerns them, how those concerns could be fixed, or how the horrors they warn of could actually happen.

“I don’t understand why some in Congress want to take away the technology we use every day,” the owner of a small plumbing business worries in an American Edge ad. Lamenting “this political campaign against American technology,” Larry Melton of Gilbert, Arizona, warns, “our leaders need to strengthen, not weaken, American technology.”

In another advertisement from the group, small business owner Renee Carlton of Corinth, Mississippi, warns that “some politicians are pushing new laws that will weaken American technology.” The result, she cautions, “will make small businesses dependent on China for the technology we use every day.” Ms. Carlton concludes, “I have a message for Congress. Don’t weaken American technology.”

While the campaigns from CCIA and CTA are clearly industry-funded efforts, the amorphously named American Edge Project is not obviously an industry group. It turns out, however, that the group was founded and funded by Facebook (aka Meta Platforms, Inc,). A May 17th article in The Washington Post headlined, “How Facebook quietly funded a war against regulation.” “Backed by millions from Facebook-parent company Meta, American Edge has launched a full-throated campaign to combat antitrust legislation in Washington,” the article reported.

Meta’s quiet funding of the anti-legislation ads isn’t mentioned in the Larry and Renee advertisements—it is buried in the American Edge website. Facebook, however, is prominently identified in another advertising campaign with a seemingly contradictory message. In a series of online and traditional media advertisements like the one below, Facebook loudly proclaims, “We support updated regulations on the internet’s most pressing problems.” 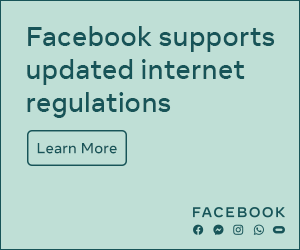 Where Are the Facts?

There are multiple proposals before the Congress pertaining to the practices of the dominant digital platform companies. But, except for the CCIA campaign, none of the commercials identify any legislation about which they are concerned. Neither do they identify a fact-based reason for the concern.

The limited global impact of the EU AI Act

Speaking up about Congressional action is both a free speech right and an important part of the legislative process. It is possible for the Congress to misinterpret an issue and/or propose a policy that is either incomplete or ill-informed. A factual discussion about specific concerns in the various legislative proposals would, no doubt, be a more meaningful contribution than emotional platitudes and unevidenced accusations about weakening American technology.

Historically, the 19th-century Iowa editorial warned that the railroads’ propaganda campaign was an effort to “perpetuate their robbery through a blinded public opinion.” As the railroads fought regulation, there was no emotion-generating tactic that was too low. The railroads even played to racism by suggesting that regulation would prevent them from segregating African Americans in Jim Crow railcars.[4] Such a refocusing of the debate shrouded the real issues in order to blind public opinion.

There has been a fulsome debate about the proposed antitrust reforms in Congress. Resorting to advertising attacks that the legislation will “take away technology,” will “make small businesses dependent on China,” will “stop progress in its tracks,” or will threaten national security would seem to be a last-gasp effort by the companies.

Iowa Republican Senator Chuck Grassley, a co-sponsor of the self-preferencing bill, seemed to be channeling the Iowa newspaper editorial of the 1800s when he observed, “we’re confronted with these big tech companies spending tens of millions of dollars on ads, and also on front groups to spread falsehoods about our bill. Obviously, they want to protect the status quo, which allows them to expand their influence.”

As we watch the reenactment in the internet age of a political strategy developed in the industrial age, it is worth remembering that the 19th-century effort was ultimately unsuccessful and that the protections put in place to assure a competitive market resulted in a century of progress and competition-driven innovation that made the United States the envy of the world.

Amazon, Apple, Google, and Meta are general, unrestricted donors to the Brookings Institution. The findings, interpretations, and conclusions posted in this piece are solely those of the author and not influenced by any donation.

Algorithmic exclusion: The fragility of algorithms to sparse and missing data

How Indiana competes for human capital