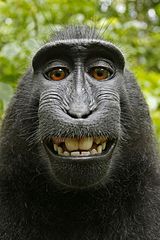 Last week’s slow summer news was filled with monkeys and robots, breaking the usual pattern of having sharks grab the headlines each August. The two stories in combination actually raise an interesting and potentially important matter regarding technology development and copyright law.

The monkey selfie already has achieved viral status and incredible online buzz. It is at the center of a legal controversy between British nature photographer David Slater and the Wikimedia Foundation, the parent not-for-profit organization of Wikipedia. While on assignment in Indonesia a few years back, Slater wound up having his shoot hijacked by the monkeys he was photographing. “They were quite mischievous jumping all over my equipment, and it looked like they already were posing for the camera when one hit the button,” he recalls. The end result was an unusually expressive selfie that now is an iconic image.

Wikipedia posted this photo for public domain availability, arguing that since the monkey, not Slater, took the picture, it is outside the scope of copyright protection. Hence, it refused to remove the picture after Slater made a request based on his assertion that the photograph was a copyrighted image that he owned. Slater now is exploring litigation options, particularly since the value of the image has increased exponentially in a matter of days since millions around the world are viewing and forwarding it online. If it remains in the public domain based upon Wikimedia’s argument that Slater actually did not create the picture, he will not be able to generate what could be substantial licensing revenue.

Who Would Own a Robot Selfie?

And robots? A just-released report from the Pew Research Center’s Internet Project and Elon University’s Imagining the Internet Center suggests that the longer-term implications of the monkey selfie might play out in more widespread ways once robots, powered by Artificial Intelligence (AI), begin to assume a much larger role in our labor pool. Half of the expert respondents that were canvassed for the report “envision a future in which robots and digital agents have displaced significant numbers of both blue and white-collar workers—with many expressing concern that this will lead to vast increases in income equality, masses of people who are effectively unemployable, and breakdowns in the social order.”

In other words, might the David Slaters of the world, rather than the monkeys in the wild, become the more likely candidates for extinction? Here’s where copyright law and technology frame an unresolved issue that is worthy of a law school exam for my Harvard Law School students in the upcoming academic year. The current US Copyright Office Compendium of Copyright Practices asserts that the “term ‘authorship’ implies that, for a work to be copyrightable, it must owe its origin to a human being. Materials produced solely by nature, by plants, or by animals are not copyrightable.”

Applied literally, this suggests that Wikimedia could have a strong copyright infringement defense if the dispute with David Slater winds up in court. Slater’s assertion is that his considerable expense in traveling to Indonesia, setting up his equipment and doing everything except pressing the camera shutter for the monkey photo constitutes a sufficient amount of creative activity that the copyright law is intended to protect. Various courts have not been sympathetic to this “sweat of the brow” argument, however, which suggests that he may face resistance if the text from the Copyright Office is interpreted strictly.

The policy at issue could have much more impact if this reasoning is applied to musical or literary works created by our robot friends who are programmed by AI in the not-too-distant future. The Compendium of Copyright Practices also says that “for a work to be copyrightable, it must owe its origin to a human being.” Clearly a robot’s activities, unlike a monkey’s, would originate with a human programmer, and also would not fall into the explicit exempt categories that the Compendium articulates (see above). If this reasoning is adopted, wider appropriate boundaries for copyrightable creative expression could be established.

The resolution of this problem thankfully will not be in the hands of either monkeys or robots. Rather, human judges will need to decide how to interpret current copyright law. And Congress will need to weigh in if it finds that the long-term implications at hand are better served by a more definitive legislative solution reflecting inevitable technological realities.