America is becoming a more class-stratified society, contrary to the nation’s self-image as a socially dynamic meritocracy. In particular, the barriers are hardening between the upper middle class and the majority below them. As New York Times contributor Tom Edsall writes (“How the Other Fifth Lives“), “The self-segregation of a privileged fifth of the population is…creating a self-perpetuating class at the top, which is ever more difficult to break into.”

This separation of the upper middle class by income, wealth, occupation and neighborhood has created a social distance between those of us who have been prospering in recent decades, and those who are feeling left behind, angry and resentful, and more like to vote for To-Hell-With-Them-All populist politicians. As I told Charles Homans, also writing on class for the Times, “The upper middle class are surprised by the rise of Trump. The actual middle class is surprised we’re surprised.”

Edsall cited my earlier essay, “The Dangerous Separation of the American Upper Middle Class,” and quoted me as follows:

“The top fifth have been prospering while the majority lags behind. But the separation is not just economic. Gaps are growing on a whole range of dimensions, including family structure, education, lifestyle, and geography. Indeed, these dimensions of advantage appear to be clustering more tightly together, each thereby amplifying the effect of the other.”

The top fifth of households by income obviously have more money than the 80 percent below them. What about other advantages? Let’s take just three: marriage, employment and education. (See Sean Reardon and Kendra Bischoff’s paper on the geographical segregation of affluence). You would expect people in top-quintile households to be more likely to have a graduate or professional degree; to have two earners in the family; and perhaps also to be married. You would be right.

The difference in the proportion of the top fifth with each of these other advantages compared to the bottom four-fifths is around 20 percentage points (we restrict our analysis to those aged 40-50). For example, in 1979 a forty-something year-old in the top income quintile was about 6 percentage points more likely to be married that one in the bottom 80 percent. Now the gap is 17 percentage points. 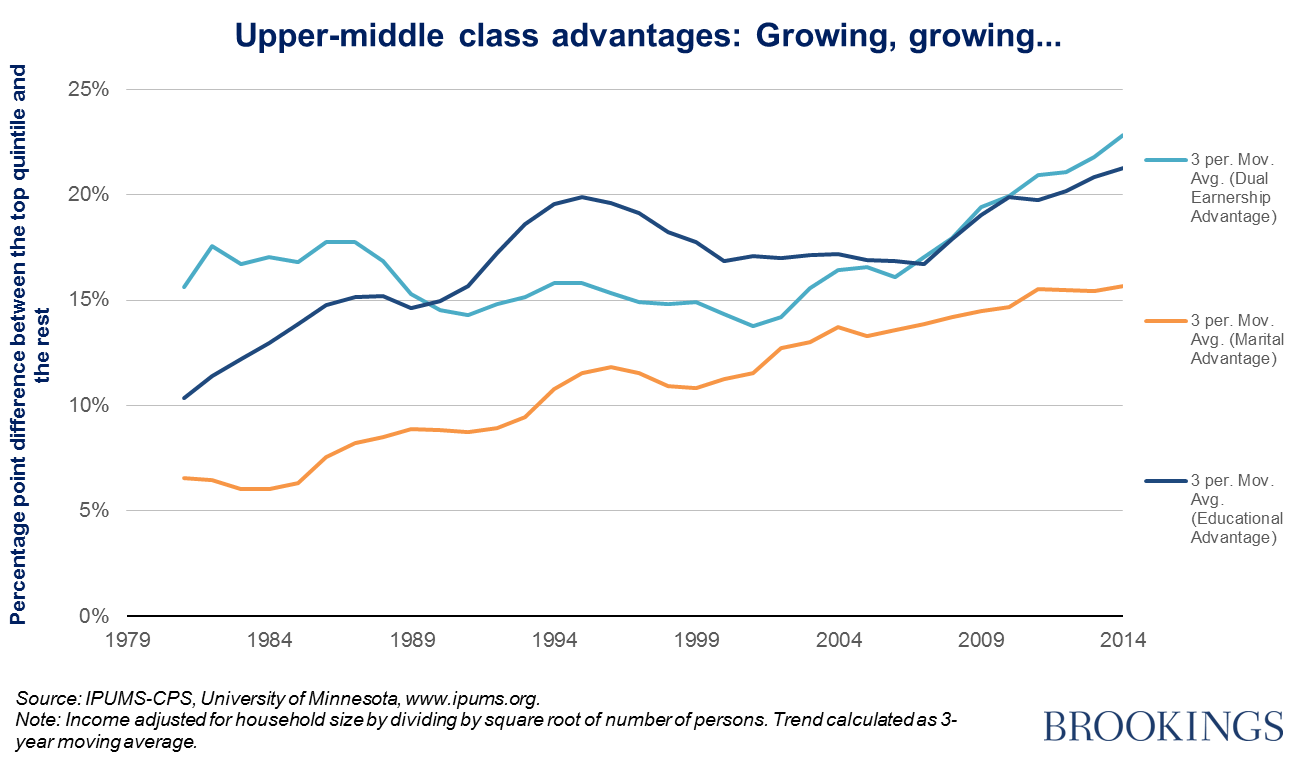 This is hardly surprising. More education and more earners in the home will increase the chances that you make it into the top quintile for your age cohort. But it is noteworthy that the extent to which these different dimensions of advantage overlap has been steadily increasing over time. Along with the increased association between top-quintile income and marriage, the differentials for graduate education and two-earner status have each increased by around 10 percentage points between 1979 and 2014.

Particularly striking is the increase in the “marriage gap” between the upper middle class and the rest. This is an important factor in the transmission of class status to the next generation, since married couples are more likely to stay together, and stable families predict better outcomes for children.

F. Scott Fitzgerald famously said: “Let me tell you about the very rich. They are different from you and me.” Ernest Hemingway’s later response was: “Yes, they have more money.” Today what separates the rich from the rest is not just money, but family life, education, zip code, and so on. This is a point made by a number of scholars, including recently both Robert Putnam in Our Kids and Charles Murray in Coming Apart. Our empirical analysis confirms that different kinds of advantage are increasingly overlapping with each other.

The framing of inequality in terms of social class used to feel distinctly un-American. No longer.