On Tuesday, September 23, heads of state and senior government officials will convene at the United Nations in New York for UN Climate Summit 2014. In advance of the summit, Brookings experts Joshua Meltzer, Tim Boersma, Elizabeth Ferris and Timmons Roberts offer their thoughts on the summit and key stakeholders.

Joshua Meltzer on the benefits of the summit, and on setting ambitions for Paris 2015 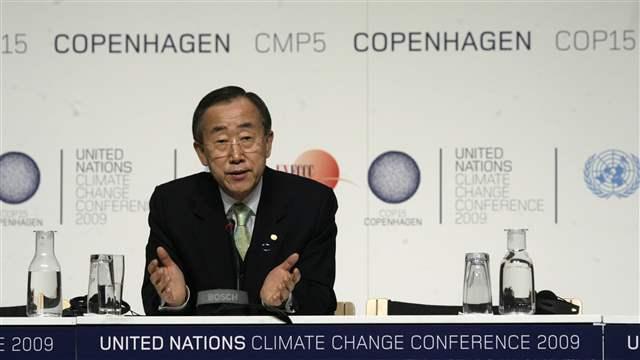 This week, the UN Secretary General Ban Ki-moon will convene a Climate Summit at UN headquarters in New York. The Summit aims to catalyze global action on climate change in the lead up to the UN Climate Change meeting in Paris 2015, when countries have agreed to reach a new climate change agreement that will include commitments on reducing GHG emissions post-2020. In a previous blog, I outlined how the UN Climate Change Summit could contribute to a successful outcome in Paris.

The main benefit of this Climate Summit will be convening leaders specifically on climate change issues – something that has not happened since the UN climate change meeting in Copenhagen in 2009 – to discuss the key elements of a climate change agreement that could be reached in Paris.  President Obama plans on attending the Climate Change Summit.  However, recent reports are that the Chinese President Xi Jinping and Indian Prime Minister Narendra Modi will not be there.[1]  If this is the case then the Summit will fall short of this goal. This is because China, as the world’s largest greenhouse gas emitter, must be  part of any discussion about what can be achieved in Paris in 2015. India’s involvement is also crucial. As a developing country with significantly lower per capita emissions than China it will need room grow its GHG emissions as it addresses its development needs, including extending energy access to the approximately 400 million Indian citizens without access to electricity. The failure of Modi to attend the summit signals a lack of confidence that the UN negotiations are going to produce an outcome that India can accept.

Despite these leaders absence, the Summit can still make progress.  Some of the outcomes to look for are commitments by governments to release their post-2020 GHG targets before the Paris meeting.  This will allow for a review of each country’s level of ambition in light of the goal of keeping temperature increases below 2 degrees above pre-industrial temperatures.  Commitments to provide adequate climate change finance including steps towards operationalizing the Green Climate Fund will be another necessary part of any deal coming out of Paris.  Signals from the UN Climate Summit that governments are moving in this direction would help create a positive dynamic in the UN climate change negotiations.

Tim Boersma on Europe: still one of the most ambitious kids in the class 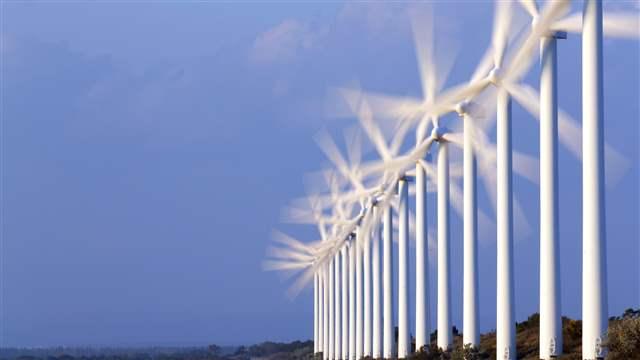 On September 10, President-elect Jean-Claude Juncker announced his new team of European commissioners, and, to put it bluntly, their job descriptions. In essence these contain positive news for the UNFCCC talks in Paris 2015, as described in this short piece: amongst many other issues, the proposed commissioners have been requested to establish policies to  reach the renewables and carbon reduction targets for 2020 and 2030, to install a binding energy efficiency target, and make the EU the world’s primary leader on  renewable energy.

Needless to say these things are easier said than done. Currently there is no agreement within the EU about renewable and carbon reduction targets for 2030, and there is significant disagreement between the 28 member states about the proposals that were published by the European Commission in January 2014. The cornerstones in these proposals are an overall renewables target for all EU member states of 27 percent, and a carbon reduction target of 40 percent for 2030. Next to the lack of political agreement, Europe has been suffering from low carbon prices. As a result, coal-fired electricity generation capacity has been operating at full speed, and carbon emissions have been on the rise, in part fuelled by cheap U.S. coal that is finding its way across the Atlantic Ocean.

Next to these internal challenges, Europe risks being the only kid in the class that wants to show ambition, as it remains to be seen whether other major emitters are willing to come to a meaningful agreement. Even if that were the case, Europe has reason to move full speed ahead. The often criticized energy transition in Germany has not resulted in black-outs as predicted by critics, and the large industrial consumers have by and large been exempt from paying the bills so far, making claims about being at  a competitive disadvantage questionable. An in-depth study by my colleagues of experiences in Germany shows that reality is often more nuanced, and important lessons can be learned (as they can from Japan, and many U.S. states) as new targets for 2030 are finalized.

Europe faces tremendous challenges, number one probably being job creation and safeguarding its competitive position in global markets. The new European Commission has expressed its ambition to pursue the trajectory of increased renewable energy, carbon reduction, and energy efficiency. That is bold, yet the right way forward, and deserves recognition. 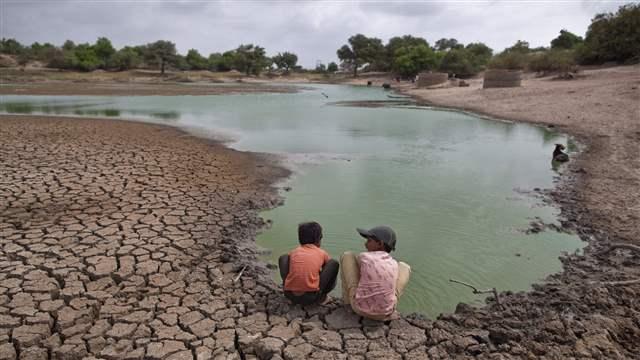 Reuters/Ahmad Masood – Children wash their hands in a partially dried-out natural pond at Badarganj village, in the western Indian state of Gujarat, August 5, 2012

While the Summit is not part of the UN Framework Convention on Climate Change and while no negotiations related to the convention will take place, the Summit offers an opportunity to keep the issue of climate change alive.  I hope that at least some of the leaders in New York next week will focus on mobility as a climate change adaptation strategy. And I hope that at least some of the voices from the ‘climate front lines’ will refer to the fact that one of the most far-reaching consequences of climate change is likely to be on the movement of people. A couple of weeks ago, the UN Conference on Small Island Developing States was held in Samoa – a region of the world where displacement from the effects of climate change is not a rhetorical issue.

Let’s hope that the Climate Summit and the processes leading up to the World Humanitarian Summit in 2016 can learn from each other, can build on the expertise that both sets of actors bring. 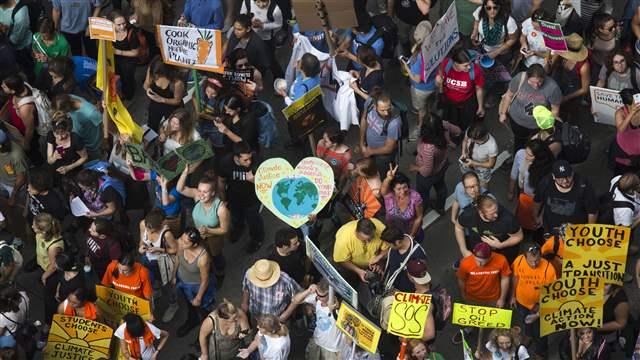 Reuters/Adrees Latif – Some of hundreds of thousands hold placards while taking part in the People’s Climate March through Midtown, New York September 21, 2014

Just as world leaders begin to assemble in New York for Ban Ki Moon’s summit to discuss how to increase global action to confront global warming, over 100,000 people took to the city’s streets demanding they do more than talk. Most of those leaders have been woefully behind the curve, but this may finally be the occasion upon which they have to listen and pay attention to citizens, who in growing numbers are calling for action.  The devastating effects of the ongoing drought in California, the tragic impacts of Hurricane Sandy, and dozens of other extreme weather events have pushed public concern over a tipping point.  Even the long silent Obama administration has begun to spend some political capital on the issue, with the President and his EPA Administrator Gina McCarthy sharply proclaiming public health threats from climate change like soaring asthma rates, the economic impacts of droughts and floods, and the moral irresponsibility of inaction.

In the past, climate change has largely lacked a noisy social movement to demand action.  The People’s Climate March in NYC attempts to show that climate change is now a mainstream issue, by bringing together diverse groups of Americans.  1400 organizations have joined together to plan the march, which has framed itself as not an environmentalist affair but a much broader, commonsense, mainstream issue.  Marchers lined up in six major blocks: Indigenous and minority communities in front, labor, families and students next, then workers and environmentalists, peace and justice groups, interfaith and scientist groups, and finally communities taking up the rear.

This is a much larger and more diverse crowd than we have ever seen assemble on climate change, anywhere.  Parallel events are being organized around the world, including in London and Rio de Janeiro.  The past two decades of “active inaction” by the world’s nations shows that action on this difficult problem will not progress without a powerful social movement to demand it.  As the old bumper sticker once said, “If the people lead, eventually the leaders will follow.”

Failing that, we’re in for some very rough weather.