The recent release of the EPA’s proposal to reduce carbon emissions from power plants represents a cornerstone of the Obama Administration’s efforts to combat climate change. As might be expected with any policy related to the issue of global warming, the EPA proposal has drawn mixed reviews from members of Congress, industry representatives and interest groups. While the public’s reaction to the new regulations is beginning to form and be measured, the underlying public acceptance of global warming appears to have moderately declined in the wake of last year’s cold and snowy weather. The results from the latest National Survey on Energy and Environment (NSEE) from the University of Michigan and Muhlenberg College indicate that Americans were less likely than at any time since the Spring of 2011 to say that that they believe there is solid evidence of global warming. As can be seen in the Table below 55% of Americans maintained the view that there was solid evidence of global warming over the last four decades, marking a 6 point decline from the fall of 2013, and a 13 point decline from the early fall of 2012. 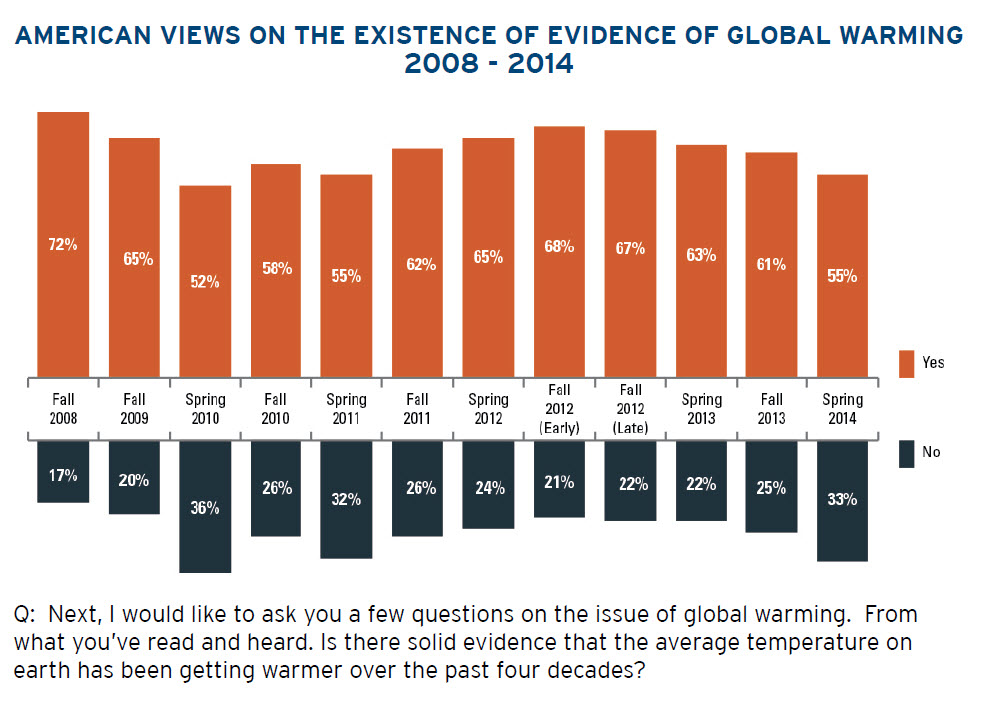 Thus as the Obama Administration embarks on its most aggressive efforts to combat global warming it faces an American public that remains more divided about the underlying issue than at any time in the past three years. A majority of Americans continue to believe that global warming is happening, but the fairly harsh winter of 2013-2014 has contributed to less acceptance of global warming among the nation’s citizens. Perhaps the chilling of American acceptance of global warming will melt after the summer of 2014 and there will be a rebound in public acknowledgement of increasing temperatures on the planet when the NSEE goes back into the field this fall. But in the short term, efforts to address global warming will have to move forward with the lingering effects of the last winter chilling public beliefs on the matter.