Taiwan’s new president, Tsai Ing-wen, was inaugurated on May 20—a hot and humid day in Taipei, where I witnessed the festivities. The inauguration ceremony marked the transition of power from the administration of now-former President Ma Ying-jeou and his Kuomintang (KMT) to Tsai and her Democratic Progressive Party (DPP). But it also had the potential to be a turning point in Taiwan’s relations with China. Would President Tsai reassure Beijing as it had demanded for months, and so preserve relations between the two sides of the Strait? Or would she fail to sufficiently accommodate China’s wishes and trigger a deterioration in relations? Beijing’s rather quick response to Tsai’s inaugural address suggests that a crisis was avoided, at least temporarily.

Three interrelated issues are at play. The first is a question of policy substance: How do Tsai and her DPP colleagues view Taiwan’s relationship to China? Beijing has insisted publicly that mutually beneficial relations are possible only if Taiwan’s leader accepts the 1992 Consensus concerning one China and its “core connotation” that the geographic territories of the Chinese mainland and Taiwan both belong to that one China. Tsai has several problems with Beijing’s understanding of the 1992 Consensus. Namely, there is a fear in her party (and in Taiwan more generally) that accepting China’s formula will start Taiwan down the slippery slope towards political incorporation in and subordination to the government in Beijing.

The second issue is a question of clarity: How clearly must Tsai state any commitment concerning the 1992 Consensus before China will be satisfied? For political and other reasons, she prefers some degree of ambiguity. Although her public positions have become less ambiguous in the last year, China still has insisted on absolute clarity (which it should have known Tsai would be unwilling to provide).

Third, how serious is Beijing about reaching a mutually acceptable formulation with Tsai on one China and Taiwan’s relationship to it? The pessimistic view is that Beijing fears that Tsai is so unalterably committed to legal independence for Taiwan that it would be unwilling to trust whatever statements she might make (or, it has convinced itself that such a fear is justified). The more cautiously optimistic view is that Chinese leaders might give her the benefit of the doubt, at least initially. 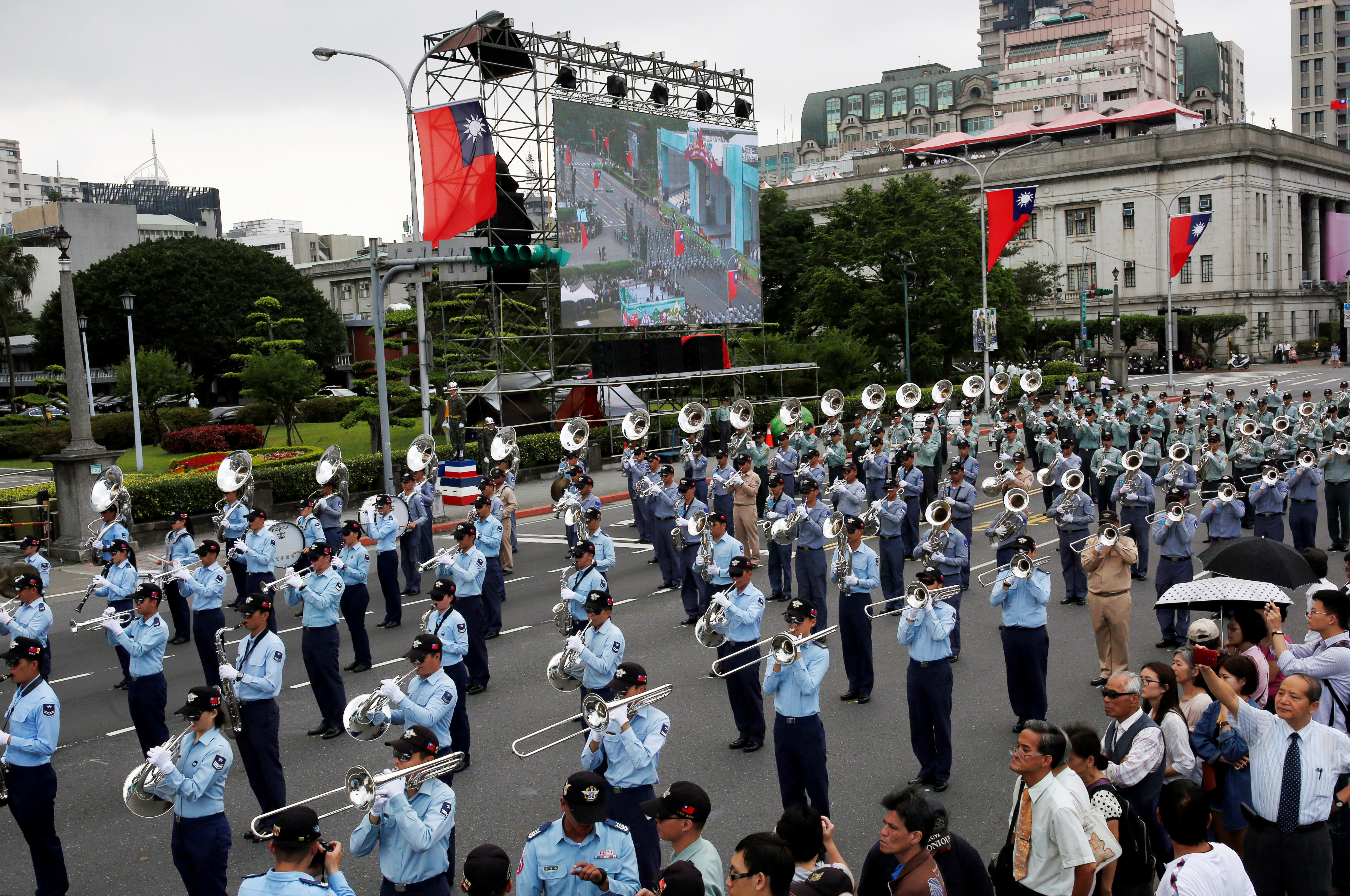 Taiwan honour guards take part in a rehearsal for the performance at the inauguration ceremony of President-elect Tsai Ing-wen, in Taipei, Taiwan May 19, 2016. Photo credit: Reuters/Tyrone Siu.

Tsai’s inaugural address and Beijing’s response are the first clear-cut data points we have to evaluate these issues.

In her address, Tsai spoke to China’s two conditions in fairly ambiguous ways, but was more forthcoming on one of those conditions than she had been so far. On the issue of the 1992 Consensus, she reiterated a formulation she had used in January, a week after her election.

She acknowledged that that since 1992, “over twenty years of interactions and negotiations across the Strait have enabled and accumulated outcomes which both sides must collectively cherish and sustain.” Based on such “existing realities and political foundations, the stable and peaceful development of the cross-Strait relationship must be continuously promoted” (emphasis added).

Concerning the content of the “existing political foundation,” Tsai named four elements. The first was what happened in 1992, including the “seeking common ground” spirit. Second is “the existing Republic of China constitutional order.” The third element “pertains to the outcomes of over twenty years of negotiations and interactions across the Strait.” And the fourth relates to “the democratic principle and prevalent will of the people of Taiwan.”

But none of this is new. Why didn’t she go further in substance and express her formulation more clearly? There are two possible explanations: first is that China was demanding far more than Tsai was willing to give, for both policy and political reasons; second is that she had reason to assume that her January formulation was satisfactory to Beijing.

It was on the “core connotation” of the 1992 Consensus that she elaborated more. She said that she was “elected president in accordance with the Constitution of the Republic of China,” and that it was therefore her “responsibility to safeguard the sovereignty and territory of the Republic of China.” Depending on how Tsai defines the Republic of China’s sovereign territory, this formulation could meet Beijing’s requirement that Taiwan belongs to one China. Moreover, she pledged that “the new government will conduct cross-Strait affairs in accordance with the Republic of China Constitution, the Act Governing Relations Between the People of Taiwan Area and the Mainland Area, and other relevant legislation.” Again, the references to the two “areas” could be taken to imply that they are part of the same country and so satisfy Beijing.

After the ceremony, I thought the outcome could go either way. Tsai had maintained a studied ambiguity on how she responded to Beijing’s two conditions. But if China’s leaders did not trust her fundamental intentions or wished to set her up for failure, then it could simply declare her statements as insufficiently unresponsive take a series of punitive actions that damaged their relations with Taiwan beyond any immediate repair (such as stealing away a group of Taiwan’s diplomatic allies), and closing the door on any continuing interaction.

The Chinese response, attributed to an authoritative spokesperson of the State Council’s Taiwan Affairs Office, appeared about five hours after Tsai concluded her address. It set forth a chain of reasoning concerning Tsai’s treatment of cross-Strait relations and the implications.

The statement first asserted that “the 1992 Consensus explicitly sets out the fundamental nature of relations across the Taiwan Straits, [stating that] both the Mainland and Taiwan belong to one and the same China and that cross-Straits relations are not state-to-state relations.” (The formula “state-to-state relations” refers to a July 1999 pronouncement by former president Lee Teng-hui that Tsai helped prepare.)

Second, it judged that in her address, Tsai was:

“ambiguous about the fundamental issue, the nature of cross-Straits relations, an issue that is of utmost concern to people on both sides of the Taiwan Straits. She did not explicitly recognize the 1992 Consensus and its core implications, and made no concrete proposal for ensuring the peaceful and stable growth of cross-Straits relations. Hence, this is an incomplete test answer.” (With that last sentence, Beijing rather snidely compares its relationship with Tsai to that of an authoritative, all-knowing teacher and an ill-prepared student.)

Beijing then reiterated the stark options it has presented Taipei before: “a choice between upholding the common political foundation that embodies the one China principle and pursuing separatist propositions of ‘Taiwan independence.’” It newly demanded that Tsai “give explicit answer with concrete actions.”

[P]ragmatism and common sense prevailed in spite of the ominous rhetoric from Chinese officials.

Finally, the Beijing response concludes that absent Taipei’s “affirmation of the political foundation that embodies the one China principle,…continued and institutionalized [cross-Strait] exchanges” through the two sides’ key governmental and semi-governmental organizations cannot be ensured, because those exchanges they are based on the political foundation of the 1992 Consensus.

What is remarkable about China’s response is the disjunction between its strong criticism of Tsai Ing-wen’s failure to satisfy its demands and its fairly restrained action. Suspending the exchange mechanisms was not a trivial step, because authoritative communications channels most needed in times of uncertainty. But a suspension (not a termination) is probably the least Beijing could have done after having framed the Tsai’s cross-Strait policy choices in such stark terms for the past year.

The good news here is that pragmatism and common sense prevailed in spite of the ominous rhetoric from Chinese officials. After issuing demands that Tsai state her position with absolute clarity, Beijing was actually willing to tolerate a fair degree of ambiguity and limit the scope of its retaliation.

The not-so-good news is that the situation between the two sides remains delicate. China has other actions it can take to convey its dissatisfaction. Beijing and Taipei have gotten past the milestone of Tsai’s inauguration without triggering an immediate deterioration, but they have not fully stabilized their relations. This is only a beginning, and what will be needed going forward is a process of incremental trust-building through reciprocal and positive words and deeds. A number of outstanding issues remain to be addressed, and unexpected events can very easily derail progress. As a start, however, this isn’t bad.