The prominence accorded South Korean President Park Geun-hye during China’s commemoration of the 70th anniversary of Japan’s defeat in World War II offered telling evidence of Northeast Asia’s ongoing political transformation. President Park and Russian President Vladimir Putin flanked Chinese President Xi Jinping as all three climbed the steps to the top of the Gate of Heavenly Peace. In a revealing photograph, she appeared on the rostrum next to the Chinese and Russian leaders, along with Xi’s two immediate predecessors as heads of the Chinese Communist Party. 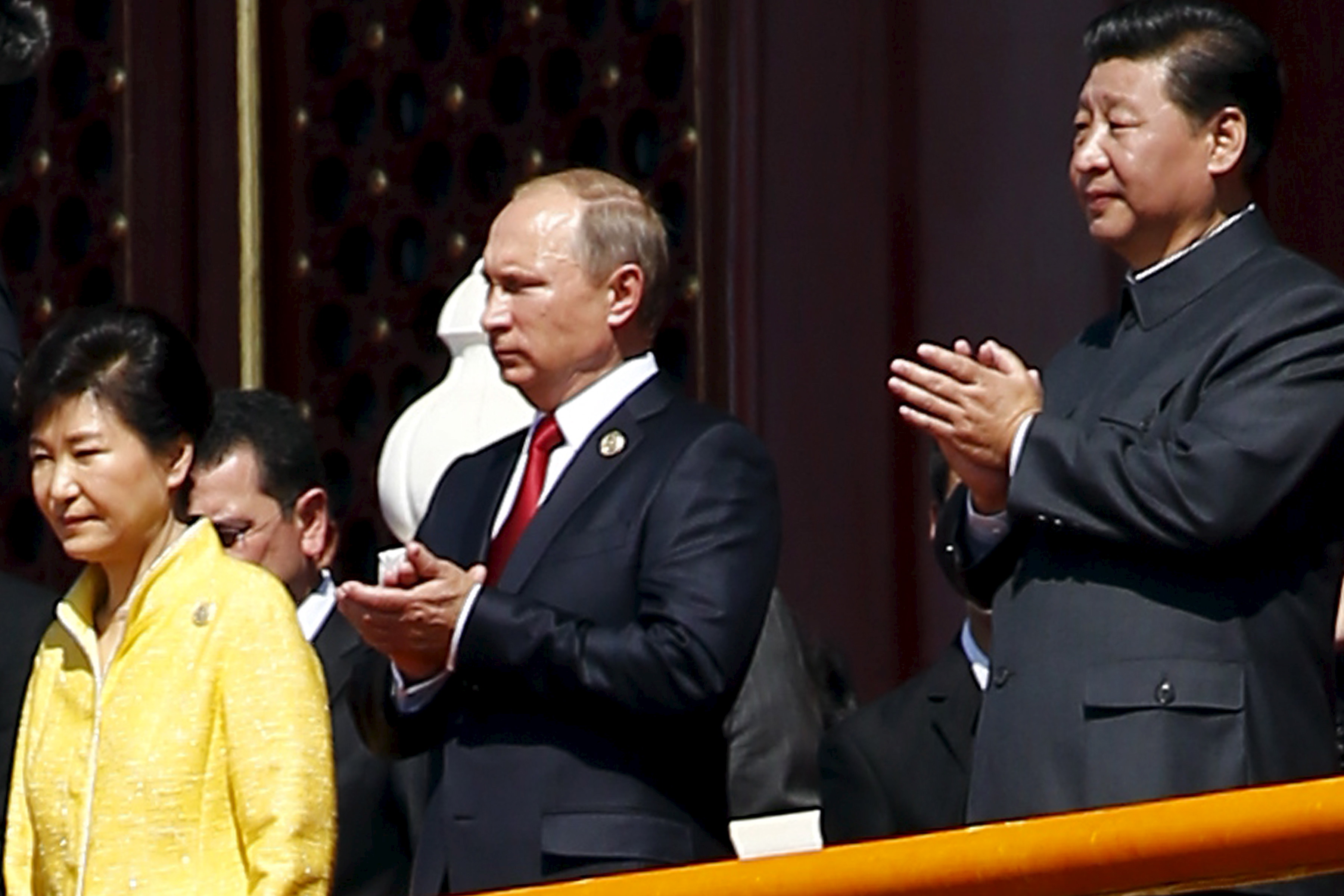 Some external observers deemed it unseemly that an important U.S. ally would be present as 12,000 Chinese military personnel and an array of China’s most modern weaponry passed in review. Senior U.S. officials (including Secretary of State John Kerry) were at best measured in their comments about Park’s decision to attend. Beijing’s previous military parades had always occurred on October 1, the state’s founding day. But Xi concluded that the defeat of Japan warranted a grandiose display of Chinese armed might—a virtual coming-out party for China as a major military power. Not surprisingly, Japan and the Philippines were conspicuous by their absence from the events in Beijing, and nearly all Southeast Asian states opted for lower levels of representation.

One of these things is not like the other

However, President Park made a very different calculation, in part reflecting her close personal and political relationship with Xi Jinping. This was her fourth visit to China as president of the Republic of Korea (ROK), and the sixth time the two leaders have engaged in extensive bilateral discussions, including in state visits to each other’s capitals. By contrast, Choe Ryong-hae, North Korea’s representative to the anniversary, was relegated to the second row in the group photo of countries participating in the events, and he held no meetings with senior Chinese officials during his stay. Xi appears increasingly alienated from Pyongyang’s impetuous young leader, Kim Jong-un, who opted not to travel to Beijing, quite possibly to China’s relief. Kim has yet to meet with Xi or any other foreign leader.

Arriving a day prior to the September 3 anniversary, Park Geun-hye (alone among the nearly 50 governments represented at the commemoration) met in separate, wide ranging discussions with Xi Jinping. At a time when upheaval in the Chinese stock market and a slowing economy within China have led many analysts to question the management skills of those overseeing the country’s development, President Park doubled down on Korea’s “China wager.” She was accompanied by the largest ever delegation of Korean corporate leaders on any of her foreign travels. The ROK already trades more with China than it does with the United States and Japan combined, a trend that could readily accelerate with the recent signing of a China-ROK free trade agreement. Park’s vote of confidence in China’s future will not go unnoticed by senior Chinese policy makers.

But the strategic implications of President Park’s visit also warrant close attention. China looms ever larger in the ROK’s long-term calculations. At the same time, the center of gravity in China’s policies toward the peninsula has shifted profoundly, in ways that support enduring American policy goals on the peninsula. The increasing alignment between Seoul and Beijing, including what the ROK describes as the “unwavering adherence” of both leaderships to Korean denuclearization, reducing the risks of acute tensions between North and South, and consultations over the ultimate objective of Korean unification, are now explicit agenda items in meetings between the two leaders. Agreement on the resumption of a trilateral summit among the ROK, China, and Japan in late October or early November following a three year hiatus represents an additional accomplishment announced in Beijing.

South Korea’s capability to deal directly with China on high priority items on the U.S. policy agenda represents an important accomplishment, all the while the U.S. and Korea reaffirm the singular importance of their bilateral alliance. At a time of widespread disquiet about China’s longer-term power ambitions in Asia and the Pacific, the breakthroughs between Seoul and Beijing represent a contrary and much more encouraging trend. Amidst what some view as the unsettling optics of President Park’s presence on the rostrum at Tiananmen, the achievements of her visit become far more comprehensible.

China’s diplomacy is limiting its own ambitions

The Biden administration has a pretty good idea of what it wants from Europe, which is to go along with their China policy. They are less clear about what they type of Europe they want. Ultimately, if Biden wants a Europe that competes with China he will have to change how the US thinks about the EU, strategic autonomy, burden sharing, and trade.

The art of war in an age of peace