China’s economic engagement in Africa has generated a lot of controversy. Headlines in Western newspapers have read: “Into Africa: China’s Wild Rush,” or “China in Africa: Investment or Exploitation?” At the same time, China is more popular among African populations (70 percent with a favorable view) than it is in Asia, Latin America, or Europe, according to Pew surveys. The popularity is no doubt linked to the fact that African growth rates have accelerated between the 1990s and the 2000s, and China’s trade and investment is part of the reason.

A snapshot of Chinese investment in the continent

In our new paper, “Why is China investing in Africa? Evidence from the firm level,” we investigate one part of this engagement, China’s direct investment (called overseas direct investment, ODI by the Chinese). Our main innovation is to work with the firm-level data compiled by China’s Ministry of Commerce (MOFCOM). All Chinese enterprises making direct investments abroad have to register with MOFCOM. The resulting database provides the investing company’s location in China and line of business. It also includes the country to which the investment is flowing, and a description in Chinese of the investment project. 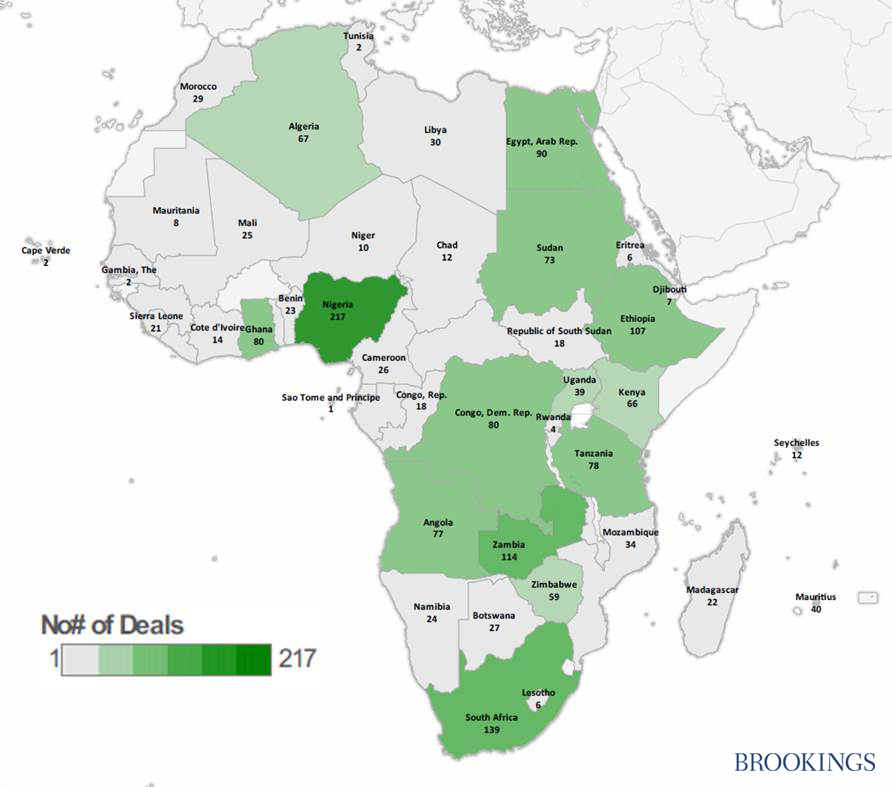 However, it does not include the amount of investment. The investment to Africa over the period of 1998 to 2012 includes about 2,000 Chinese firms investing in 49 African countries. Firms often have multiple projects, so there are about 4,000 investments in the database. We think of the typical entry as a private firm that is much smaller than the big state-owned enterprises involved in the mega-deals that have captured so much attention. This data provides insight into what the Chinese private sector is doing in Africa. Based on the descriptions of the overseas investment, we categorize the projects into 25 industries covering all sectors of the economy (primary, secondary, and tertiary). The allocation of the projects across countries and across sectors provides a snapshot of Chinese private investment in Africa.

We then investigate the allocation of projects more rigorously. In particular, we ask whether factor endowments and other country characteristics influence the number and types of investment projects from Chinese investors. If Chinese investment is similar to other profit-oriented investment, then the number and nature of projects should be related to the factor endowments and other characteristics of the recipient countries. Indeed, we find that while Chinese ODI is less prevalent in skill-intensive sectors in Africa, it is more prevalent in the more skill-abundant countries, suggesting that Chinese investors aim to exploit the local comparative advantage. We also find that Chinese ODI is more concentrated in capital-intensive sectors in the more capital-scarce countries, suggesting its importance as a source of external financing to the continent. These patterns are mostly observed in politically unstable countries, implying firms’ stronger incentives to seek profits in tougher environments.

The allocations of ODI and total FDI across 49 African countries have some important similarities: Both are attracted to larger markets and both are attracted to natural resource-rich countries. Many of the large Chinese investments are in energy and minerals, just as Western investment favors these natural resource projects. One important difference concerns governance: Other things equal, Western investment is concentrated in African countries with better property rights and rule of law. Chinese ODI is indifferent to the property rights/rule of law environment, and on the other hand tends to favor politically stable countries. This difference makes sense given that some significant part of the volume of Chinese investment is tied up in state-to-state resource deals. China is apparently more concerned with the political stability of the government than with the environment of rule of law in the domestic economy. In light of these different tendencies of ODI and FDI, Chinese investment tends to be a large share of total investment in countries with poor rule of law.

By using both the volume data on Chinese ODI—in which the big resource deals no doubt play a dominant role—and the firm-level registration data, which is dominated by small and medium private firms, we think that we have drawn a nuanced and accurate picture of Chinese investment on the continent.

Recent trends in global value chains and beyond