The labor market has shown another month of growth, according to today’s employment report. Payroll employment increased by 80,000 jobs in October; private sector employment was up by 104,000, while governments continued to shed jobs.  Additionally, the employment gains in August and September were revised upward by a total of 102,000. On net, the unemployment rate ticked down slightly to 9.0 percent. Over the past year, payroll employment has increased by an average of 125,000 per month, just enough to accommodate new entrants to the labor force.

While these emerging signs of growth are promising, the United States remains a long way from full employment. One out of every eleven American workers is still unemployed.  Further, many of those who have found new jobs have been reemployed at lower wages and history suggests that their reduced wages are likely to persist for years to come.

In this month’s analysis, The Hamilton Project explores the experiences of workers who lost their jobs during the height of the Great Recession, looking at the impacts of this economic shock on future earnings and reemployment prospects. We also continue to explore the “job gap,” or the number of jobs that the U.S. economy needs to create in order to return to pre-recession employment levels while also absorbing the 125,000 people who enter the labor force each month.

Losing A Job In the Great Recession

Between October of 2008 and April of 2009, an average of 700,000 American workers lost their jobs each month—contributing to the worst sustained decline in employment since the Great Depression. Research suggests that many of these workers—particularly those who held long-term jobs—will experience hardship that extends beyond the time they are unemployed. Once they are reemployed, they often earn significantly less, impacting the quality of life for them and their families.

The Hamilton Project examined the earnings and employment histories of full-time workers who lost their job for economic reasons between October 2008 and April 2009, and followed their earnings and employment in the two-years after their job loss. The results are shown in the chart below. The blue line tracks the average earnings of all workers who lost their job, including those who were quickly reemployed, as well as the many Americans who remained unemployed. Before they suffered job losses, these workers made roughly $3,640 per month, or $43,700 annually on average. Two years following their job loss, the average earnings of this group was reduced to $1,910 per month, about $23,000 annually—48 percent lower than their average pre-job earnings.

Looking only at those workers who were able to find new jobs (the dashed red line), this group still suffered a significant earnings loss, making an average of $2,420 in the month ($29,000 annually) after their job loss, and $3,030 per month (36,400 annually) two years later—17 percent less than they earned in the months before they lost their job. 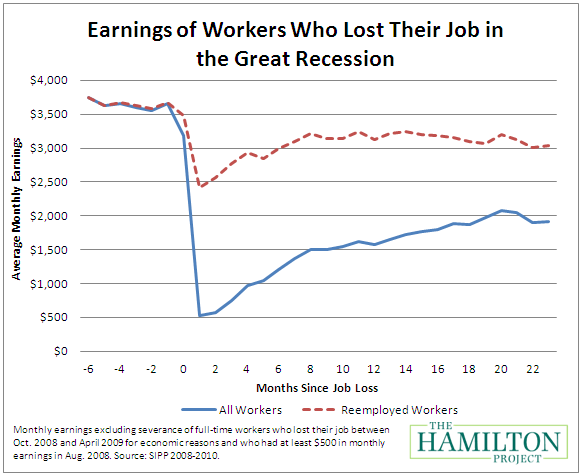 Involuntary job loss can be a harrowing experience in ordinary times, but recent research suggests the consequences of job loss are worse for workers and their families during recessions. During economic downturns, those who suffer job loss tend to be out of work for longer periods of time, resulting in higher total earnings losses. In the aftermath of the Great Recession, the average duration of unemployment is at its highest level since record-keeping began in 1948.

Workers who experience the largest and most persistent earnings losses tend to be long-tenured workers displaced from their previous job because their company went out of business, moved its operations abroad, or eliminated their positions or shifts. Workers displaced during recessions tend to experience large lifetime earnings losses–a decline in earnings of roughly 19 percent or $112,100 over the next twenty-five years (Davis and von Wachter 2011). This is approximately double the lifetime earnings losses of workers displaced in non-recession years. To provide a sense of the magnitude of the current challenge, almost 7 million American workers have been displaced from long-term jobs during the last three years.  If the prior research accurately predicts the future, these workers will experience a total loss of earnings of roughly $774 billion over the next quarter century.

One reason for these large and sustained earnings losses is that the skills attained and valued in previous jobs are often less valuable in today’s rapidly changing economy. Indeed, the largest earnings losses are incurred by displaced workers whose new jobs involve different skills. On average, their losses are double those of workers who become reemployed in a similar industry and occupation (Poletaev and Robinson 2008). Educational attainment also plays an important role in how well a worker fares, with less-educated workers hit hardest. Workers with a high school degree or less who were displaced in the 1990-1991 recession were 8 percentage points less likely to have health insurance in their jobs 10 years later and more likely to be unemployed again (von Wachter and Handwerker 2009). Workers with more than a high school education were only 3 to 4 percentage points less likely to have insurance.

The negative impacts felt by dislocated workers extend beyond earnings to their health and well-being. One study found that workers displaced in the 1980-82 recessions experienced a 1 to 1.5 year reduction in life expectancy (Sullivan and von Wachter 2007). The scars of job loss have also been shown to extend to the next generation. Children whose fathers were displaced in the 1980s earned on average 9 percent less as adults than children whose fathers had not experienced displacement and were more likely to receive unemployment insurance and social assistance (Oreopoulos, Page and Stevens 2008).

As of October, our nation continues to face a “job gap” of 12.3 million jobs. 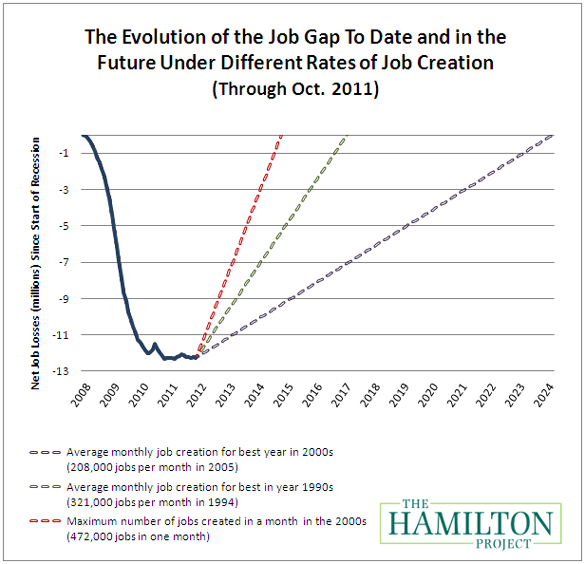 While the United States continues to face a formidable job gap, recent research shows that the Great Recession will continue to leave its mark on the American workforce long after jobs return.


Many of the new jobs that the economy is creating will require college or post-secondary training. Improving the nation’s traditional K-12 education structure to better prepare the next generation to compete in the global economy is an important first step in addressing this challenge. Earlier this fall, The Hamilton Project hosted a forum and released new proposals aimed at improving the quality of primary and secondary education in the United States.

For those still suffering from the Great Recession, training programs are a promising opportunity to help improve their well-being. For disadvantaged workers, many of whom have slipped through the cracks of traditional education systems, training can provide the basic skills needed for employment. For many of the nation’s dislocated workers, counseling and training in high return areas, such as information technology, science, or emerging service sectors such as hospitality and retail, can help prepare them for jobs with earnings comparable to their previous position.

Currently, there are a number of barriers to obtaining training, including a lack of information about programs and their potential returns in the labor market, requirements that a participant be unemployed to receive grants—which is impractical for many workers who are supporting families—and even oversubscription of existing training classes.  In this time of economic and budget challenges, it is vital that training resources are concentrated on the programs that best aid the workers who are confronting the aftermath of the Great Recession.

Editor’s Note: On November 30th, The Hamilton Project will host a forum on the importance of job training to help boost the productivity of American workers. The Project will release three new papers, including a broad strategy paper and two policy proposals by outside authors focusing on ways to aid the nation’s distressed and dislocated workers. More information on the event can be found by

. As we embrace the economy of the future, training can and will play a vital role in providing many of America’s most vulnerable workers with the skills to succeed.