On balance, the April employment numbers showed modest improvement in the job market. According to the Labor Department, payroll employment increased for the seventh straight month, as employers added 244,000 jobs. However, the unemployment rate bounced back up to 9.0 percent, reversing the gains of the last few months, and highlighting the continued fragility of the economic recovery.

Many factors affect America’s long-term employment and productivity, some more obviously than others. As noted in previous Hamilton Project papers, an educated workforce, technological innovation, and well-functioning infrastructure are important drivers of job growth. But another factor that impacts our health, and therefore our productivity, is the environment—more specifically, the air we breathe on a day-to-day basis.

In this month’s posting we examine the employment and productivity costs of air pollution, measuring its health effects on America’s workforce. We also continue our look at America’s “job gap,” or the number of jobs that the U.S. economy needs to create in order to return to pre-recession employment levels while also absorbing the 125,000 people who enter the labor force each month.

Air Pollution Across the Nation

The phrase air pollution conjures up images of black smoke and dirty skies. But air pollution does more than just soil the environment. It also makes people sick and, as a result, has important economic consequences. It is well known that air pollutants, ranging from particulate matter (soot) to ozone, are the cause of a variety of illnesses and even premature death. In fact, recent research suggests that 94 percent of the non-climate-change costs of air pollution are health-related. From asthma to premature mortality, the list of ways in which air pollution can harm our health is lengthy and well-documented. What is less obvious, however, is the impact pollution has on employment and productivity.

The map below shows counties designated “non-attainment” by the Environmental Protection Agency because their ambient pollution concentrations of specific contaminants exceed the National Ambient Air Quality Standards. Currently, there are counties that exceed the standards for ozone, particulate matter, sulfur dioxide, and lead. In April 2011, 395 counties were designated as “non-attainment” for at least one of these pollutants. 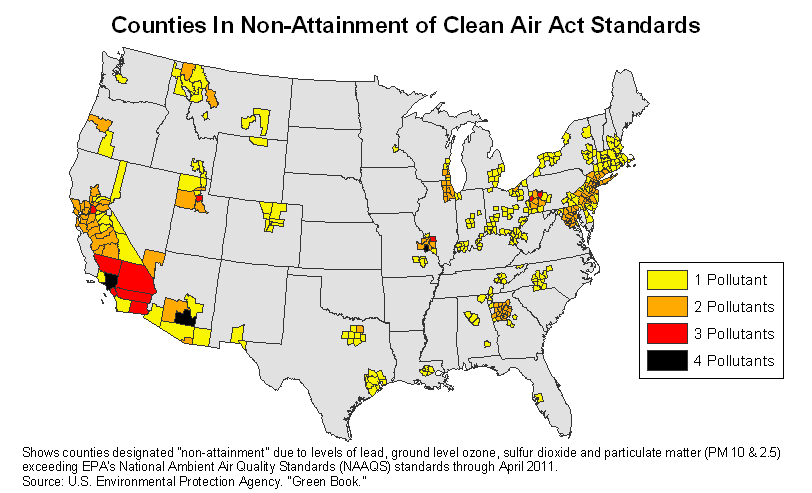 The Impact of Air Pollution on Health and Productivity

Air pollutants are linked to higher rates of infant mortality, increased frequencies of low birth weight, greater risks of asthma attacks and other forms of respiratory sickness, and premature mortality among adults. The incidence of low birth weight has been associated with higher health care costs and reduced earnings later in life. More broadly, good health is also a requisite for being productive on the job, and thus air pollution also affects employment and productivity.

In short, air pollution has a direct impact on the health and productivity of today’s and tomorrow’s work force.

Despite better news in today’s employment report, the United States continues to face a severe job gap of just under 12 million jobs.

As in previous months’ postings, The Hamilton Project updates America’s “job gap,” the number of jobs that the U.S. economy needs to create in order to return to pre-recession employment levels while absorbing the 125,000 people who enter the labor force each month. 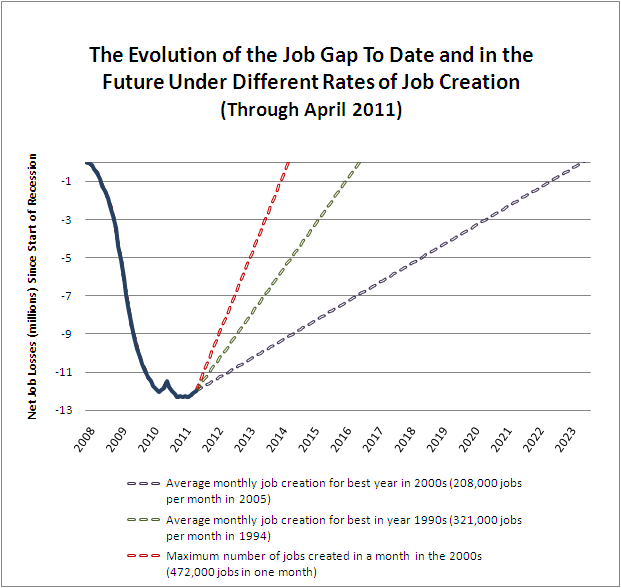 The U.S. economy continues to recover, but we clearly have room for improvement. In the past two months we have shown that the annual earnings of middle-of-the-road women and men are either stagnating or on the decline.  And the number of unemployed Americans remains dauntingly high, with a job gap of just under 12 million left to fill.

The Hamilton Project has explored a wide range of policy solutions for growing the economy and putting Americans back to work. On May 18th, at a forum in Washington, DC we will examine the future of American energy and the role of energy and climate change policy in improving Americans’ well being.

America’s current energy policy imposes a range of costs on the U.S. economy through its effects on our health and productivity, national security, and the environment. The Hamilton Project will release three new policy proposals during the May 18th event that would improve the regulations governing energy consumption and environmental quality, create a new clean energy standard, and improve the federal government’s efforts to demonstrate new energy technologies.


The Hamilton Project will also release a new paper outlining principles to move the country away from a system that favors energy sources that provide low out-of-pocket costs but damage our health and productivity, national security, and the environment. Only by leveling the playing field can we find solutions to America’s energy problems that will improve our quality of life.

What does more remote work mean for workers and the economy?

Reimagining industrial policy for the service and tech sectors

A COVID-19 labor force legacy: The drop in dual-worker families