For many students, this year’s back-to-school supply list looks different—rather than pencils and paste, students are starting the year with a Zoom account and a keyboard. Remote learning has become the educational norm; most K-12 students look to be attending class only via a screen. But there are big race gaps.

We show that Black, Hispanic, and Asian students are, on average, around fifteen percentage points more likely than white students to live in a “remote-only” school district. In the absence of aggressive policy interventions, this online learning gap could widen existing educational disparities by race.

To examine the shift towards remote learning, we analyze weekly-updated school district fall policy data compiled by Education Week (last updated on September 18th, 2020). A project recently published by Chalkbeat and the Associated Press also investigates race and school reopening plans, but uses a different data source and method. So far, Education Week has gathered just over 900 school districts, which collectively account for about 40% of U.S. students. [1] 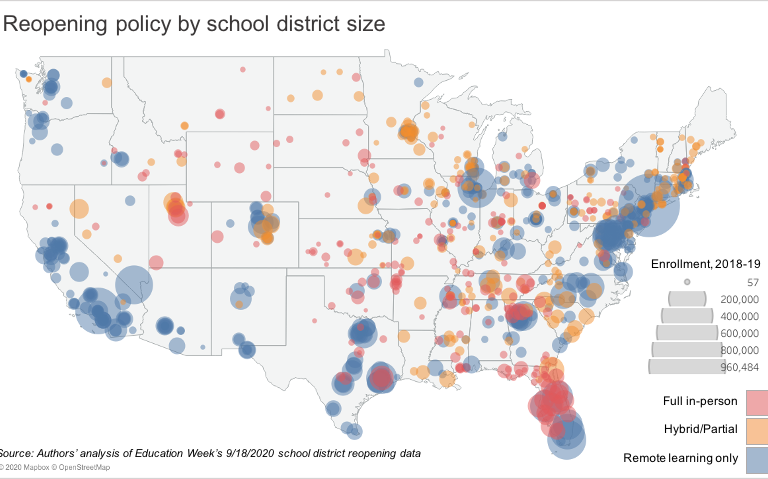 We compare the school districts in the sample to the nation as a whole based on locale. Specifically, we group school districts into four locale categories—rural, town, suburb, and city—using National Center of Education (NCES) data. The Education Week database has more information on densely populated districts than rural areas or towns. For example, the sample accounts for 65% of students in cities, but only 10% of students in rural areas.

This means that we have data on school districts where students of color are most likely to live. The dataset accounts for about half of Black, Hispanic or Latino, and Asian students thus far, but just 30% of white students, who are more likely to live in rural areas.

For the main results presented here, we have assumed that all school districts will show the same pattern as those already in the dataset in terms of remote learning, based on locale. For example, the information on 246 out of 836 city districts (which account for 65% of all students in city districts) is available so far. Of these 246 districts, 71% (175) have switched to only remote learning, 18% (45) switched to a hybrid model, and 11% (26) are conducting full in-person teaching. We assume that the remaining 590 out of 836 school districts in this category will follow the same pattern. Ditto for those in the other categories.

Most school districts are not currently in the sample, and missing school districts are likely to be majority white. These data constraints should be borne in mind in interpreting these results. However, we are reasonably confident that the patterns will not change dramatically as more data becomes available, especially regarding differences by race. So far, the relationship between locales and re-opening plans remains consistent as the dataset grows.

Based on these assumptions, we estimate that over half of U.S. students are enrolled in a remote-only district.

This finding is not surprising for a number of reasons. First, COVID-19 has been most prevalent in cities. Second, districts in cities and suburbs have schools with more students, making it more difficult to organize socially-distanced in-person learning. Third, policymakers in cities are more Democratic, which likely makes them more likely to favor coronavirus caution than Republicans in rural areas and towns.

Most students of color live in remote-only districts

But students aren’t equally likely to live in a remote-only district. Drawing on National Center for Education Statistics (NCES) enrollment figures for 2018-19, we examine the racial composition of school districts. According to our estimates using early data, over two-thirds of students of color are starting their school day by logging on to a computer.

Adding to the COVID-19 toll for Black and Hispanic families

Because of systemic racism, families of color are disproportionately managing COVID-19 risks; Black and Hispanic or Latino adults are more likely to have underlying health conditions that complicate illness, less likely to have health insurance, and more likely to work jobs that put them at risk of infection. Accordingly, over half of parents of color want schools remote (compared to a third of white parents). The back-to-school season is adding an additional burden. Black and Hispanic or Latino families are more likely to live in remote-only school districts, but the least likely to have the resources to help their children to navigate online education. Parents of color are less able to work from home to stay with children; less likely to be able to afford child care; and have lower rates of access to the internet or a computer. Online learning has also been shown to have the greatest negative impact on students with lower levels of prior academic attainment.

School districts are choosing remote-only policies for the best public health reasons, and they shouldn’t offer in-person instruction until it’s safe to do so. But close attention must be paid to the long-run equity challenges here, too. To address them, policymakers should:

Resilience in the face of a pandemic: COVID weighs unevenly across racial lines

Beyond reopening schools: How education can emerge stronger than before COVID-19