Updated versions of all charts are available at pandem-ic.com.

As we start to see the light at the end of the pandemic’s dark tunnel, inequities in the distribution of vaccines across countries are coming under intense scrutiny. Unequal vaccine distribution is not necessarily unfair—after all, some population groups are more vulnerable than others. Yet relative to sensible metrics of need, the current inequality is excessive. Efforts to boost and balance deployment have galvanized under the clarion call for #VaccinEquity, but progress has been slow and marred by bottlenecks.

In addition to the various practical constraints—including financing, logistics, manufacturing, and patent rights—three misconceptions stand in the way: the view that COVID-19 is mainly a “rich-country disease”; a focus on herd immunity that detracts from the pressing goal of protecting the global priority group; and a belief that fixing vaccine hoarding in rich countries will fix vaccine equity on its own.

A global snapshot of vaccine inequity

Competing interests in diplomacy, economics, and global health shape the international distribution of vaccines, but overshadowing them all are universally recognized ethical principles that center on “need” and “priority for the disadvantaged.” Needs encompass a fuzzy spectrum. They include the burden of morbidity (e.g., long COVID), broader health effects (e.g., undermanaged illnesses), and wider socioeconomic effects (e.g., food security and poverty). But as long as this pandemic rages on, needs will first and foremost be defined by the vulnerability to premature death—which not only is devastating but also irreversible and hence hard to compensate for.

Philip Schellekens and Diego Sourrouille
Tuesday, May 5, 2020
Up Front

Rich countries have a moral obligation to help poor countries get vaccines, but catastrophic scenarios are overrated

Navigating the complexities around a COVID vaccine in Africa

Quantifying needs is easier said than done. Trade-offs battle trade-offs. Prioritize those with high risk of death once infected or those most likely to infect or be infected? Prioritize on the basis of expected years of life left? If so, how to compare 60-year-olds from Niger with an average of two years left to live with those in Norway with 23 years left? And should we prioritize places with high R values (the reproduction number)? If so, do we distinguish between situations of poor infection control due to structural factors (e.g., informality) or discretionary ones (e.g., low compliance with mask rules)?

The vaccine equity trackers on the website pandem-ic.com examine the massive needs of the developing world through the lens of income classification. They focus on the “global priority group,” which includes vulnerable seniors older than 60 and those in the medical profession, and thus combine notions of intrinsic and extrinsic vulnerability (age and exposure). The measure could be widened by including comorbidities such as diabetes and hypertension that are prevalent in developing countries too. They could also control for R, though limited testing and the likelihood of new variants would pose a challenge. The advantage of our approach is that the data are comprehensively available.

Figure 1 then shows the disconnect between vaccine distribution and global needs. High-income countries account for 51 percent of doses administered globally—almost twice their share in the global priority group. Developing countries account for 71 percent of the global priority group but have administered 49 percent of vaccines. The contrasts are greater for lower-income countries. Demography drives some of these results. Developing countries are younger on average, but they count more seniors because their populations are collectively much larger.

One possible argument to justify the inequality in vaccine distribution is that “COVID-19 is a rich-country disease, so rich countries deserve vaccination priority.” We would respond that developing countries should not be penalized for their pandemic being “less visible” with population size diluting impact and data quality obfuscating it. The levels and dynamics of reported mortality rates indeed vary considerably across income groups (Figure 2). The usual pattern of death from infectious disease seems to have reversed, with high-income countries hit the hardest. But this does not diminish the fact that just over 50 percent of all fatalities have occurred in the developing world (Figure 3). Because fatalities are spread over a larger population base, the reported intensity is diluted. But a life lost is a life lost. At a minimum, equal moral concern should apply; more appropriately, the disadvantaged should receive priority.

The idea that the pandemic has passed the developing world, including the poorest countries, is a myth reliant on poor data. The reported data underestimate reality by a vast margin. Demography alone suggests the developing country share in the global death toll should hover around 70 percent, not 50 percent. All countries struggle with data quality, but more limited testing and weaker vital registration systems compound the challenges in the developing world. Just 1 in 4 deaths from malaria are detected globally; in some low-income settings, it can be 1 in 20. Unsurprisingly, a recent post-mortem surveillance study in Zambia found that, among the deceased in a major morgue, 1 in 5 tested positive, even though none did so antemortem. When it comes to new variants and “new new variants,” let’s also not forget that we may all be vulnerable and in need of protection.

A second misconception relates to vaccine equity itself. Vaccine equity is desirable on account of basic notions of morality. Many have also appealed to externality arguments: Vaccine equity helps dampen international transmission and muzzle new variants. It is therefore in everybody’s interest. After all, the pandemic isn’t over until it’s over everywhere.

An appeal to externality arguments (namely, infection risk) may incentivize people to practice greater solidarity across borders. But even with the support of enlightened self-interest, we should still make sure that the global priority group gets vaccinated first. Elderly diabetics in developing countries deserve priority over healthy youngsters in high-income countries. The alternative scenario where we sequence herd immunity across the income ladder would result in countless deaths globally. 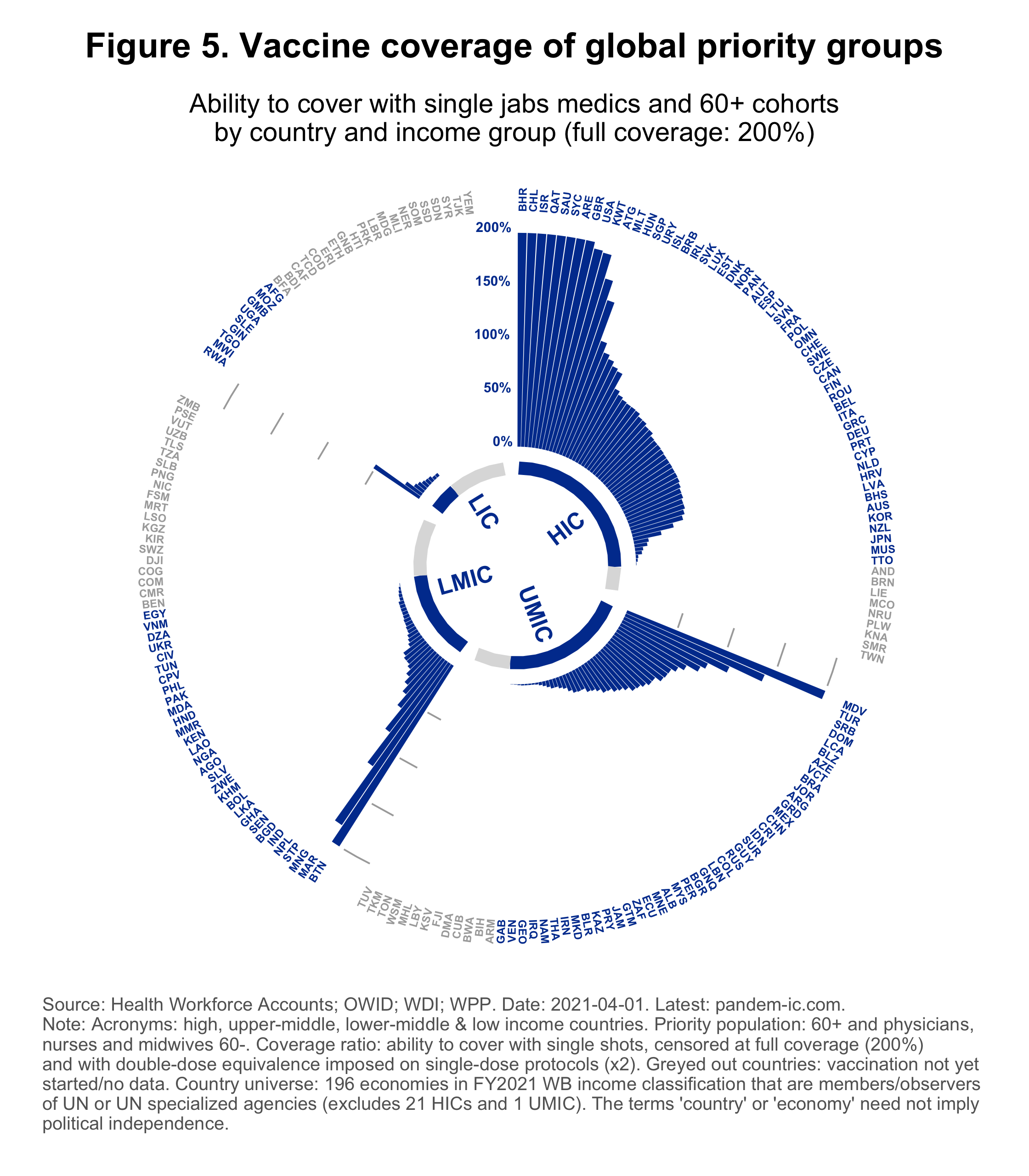 In practice, this means that we should fill the gaps in Figure 5 as a matter of first priority (see pandem-ic.com for a dynamic visualization). The figure shows where we stand on vaccine equity with respect to the global priority group, by country and income classification. The vertical axis shows the intensive margin of vaccine equity: the capacity of countries to fully cover the priority group of elderly and medical personnel with single doses, with full coverage at 200 percent (technical details are available here). The circular axis shows the extensive margin: the participation of countries in the vaccination process. As the predominantly blank chart shows, much progress is needed in both dimensions. But it is not a Utopian ideal—it is well within our collective reach.

A final misconception relates to vaccine equity more broadly. It is worth remembering the world’s performance against the Millennium Development Goals. We met the goal of reducing income poverty five years ahead of time. But the progress on all other goals—the non-income dimensions of development including health, education, sanitation, and others—were much more incomplete and heterogeneous. These dimensions represented the persistent development bottlenecks that left countries behind and motivated the broader 2030 agenda

For at least three reasons, the call for #VaccinEquity needs to be connected to this broader development agenda. First, because fixing vaccine hoarding in rich countries and distributing them more equitably across countries will not be sufficient to fix vaccine inequity on its own. Inequities and deficiencies across the broader supply chain across and within borders need to be considered. Second, the vaccine equity movement must call attention to and extend greater solidarity with other inequities in global health and development. Third, since pandemics are likely to occur again, we must seize the opportunity to break the cycle of panic and neglect and scale up pandemic preparedness.

Health: Assuring health security for all